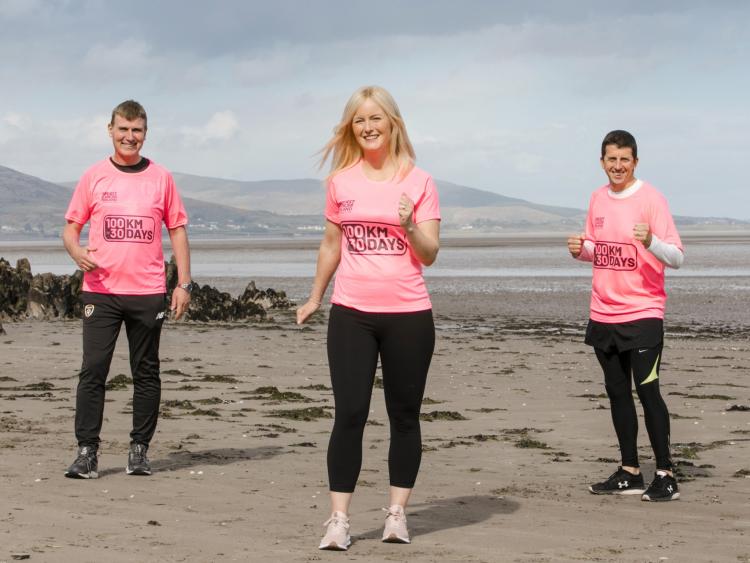 Dundalk businessman, Niall Carroll has launched his 100k in 30 Days Challenge to raise funds for Breast Cancer Ireland in support of his wife, Cara McAdam (40) who was diagnosed with breast cancer last year.

With the help of their local community and with newly appointed Ireland Football Manager Stephen Kenny on board, it is hoped that this initiative will raise significant funds for the many thousands of women impacted by breast cancer in Ireland by funding research into the disease.

Cara, a biology teacher, and mother of two young children, was diagnosed with breast cancer last year and she is now coming towards the end of her treatment.

Niall first organised the 100km in 30 Days Challenge, within his own community of Blackrock, in 2014.  With everything going on, he was thinking of not going ahead, this year.   However, when Cara asked him to do it bigger and better and to support Breast Cancer Ireland’s research and awareness efforts, he couldn’t refuse.

The idea is that anyone can either run, jog or walk the distance within 30 days, with their progress tracked online at www.100kin30days.ie. Participants can also challenge others to see who does the most kilometres. The record so far is 471km in 30 days!

Living near to Cara and Niall, Stephen Kenny who came along to Priest’s Beach, Blackrock on Saturday last for a socially distanced photocall, to help the couple launch the campaign, comments, “With everything going on, it is heartening to see Niall and Cara taking on the 100k in 30 Days Challenge and raising much-needed funds to support Breast Cancer Ireland.  Like so many people, I have seen the impact the disease and I think it is so important that initiatives like this ensure that research into the disease continues into the future.”

For more information on Breast Cancer Ireland go to www.breastcancerireland.com