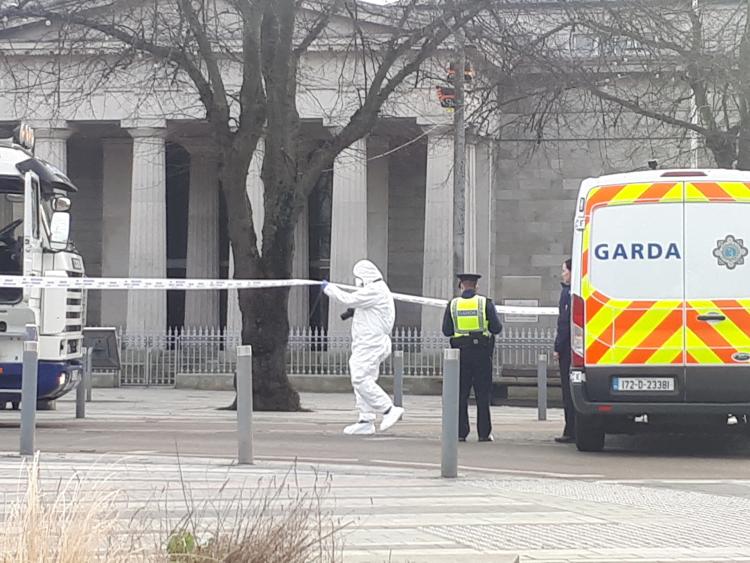 A local TD has lashed out at those responsible for the 'reprehensible attack' which saw two ATMs stolen from Dundalk and cars set alight at Dundalk Garda Station.
Speaking to The Democrat, Ruairi O Murchu said: "Last night saw a reprehensible attack on the community of Dundalk, that put the lives of frontline public servants in danger as they deal with the Covid-19 emergency."

The Louth TD Ruairí Ó Murchú added: “Organised criminals will use any situation to its advantage. We as a society cannot accept that.”

Dundalk Garda station was left with two burning cars at either entrance, blocking in the armed response unit shortly after 3am and within minutes Clanbrassil Street was the scene of a double ATM robbery at the Ulster Bank and AIB.
“I was awoken by calls and messages shortly after this event and later spoke with Gardaí at the scene. Crime scene investigators have now arrived. The digger and truck used are still on the street and a car was also found burnt out in Deerpark, Bellurgan.”

"I spoke with a senior Garda earlier in the week, who believed certain criminal gangs would be under the illusion that they would be able to operate without detection, but that Gardaí were prepared for this.
"I had commended them for operations that had been carried out against drug gangs during this period.
"This is vital as there is much anecdotal evidence of an increase in drug debt intimidation as the recreational cocaine market takes a hit.

“Initial reports are that due to the Garda pursuit and cross border co-operation there have been three arrested in Silverbridge and the ATMs have been recovered.

“Organised Criminal gangs are a blight and a virus that are with the community all the time.
“We are facing a life and death battle with Covid-19 and criminal gangs cannot be allowed to risk lives, profiteer, cause damage and disrupt the services busy dealing with this pandemic.
“I ask anyone with information to bring it to the Gardaí and PSNI”