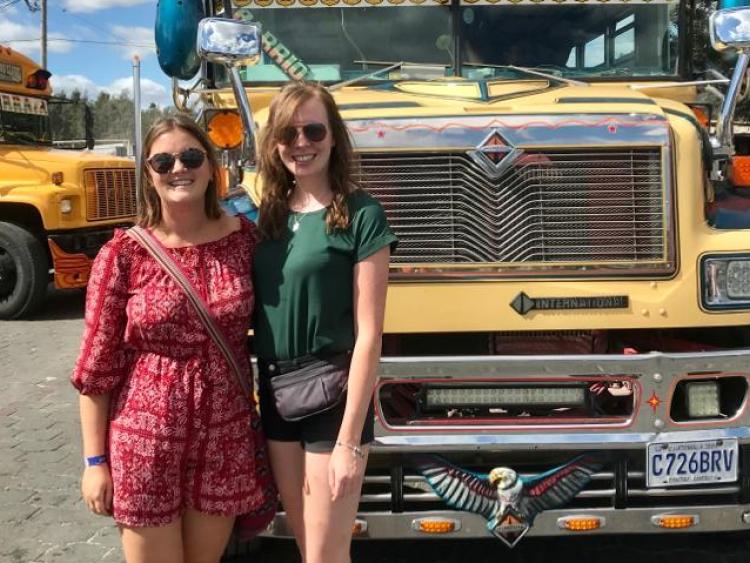 Shelagh woman Marina Woods was having the time of her life travelling through Central America until Covid-19’s outbreak in the region forced her and friend Aoife to perform their own ‘great escape’.

Currently self-isolating in Waterford having returned to Ireland last Saturday week, following a hectic few days in which she crossed borders and negotiated multiple flights, relief was the overriding feeling upon touching down in Dublin.

The 30-year-old left for a four-month travelling adventure in the Concacaf region in January, flying to Mexico City with the aim of reaching Panama by the end of April. In between there was “no real plan” bar following instinct.

Six-and-a-half weeks in Mexico preceded a seven-day stint in Belize before crossing into Guatemala at the start of March. All the while the coronavirus pandemic was thought of as “an Asian and European problem”. Not for long, though.

“By the time we arrived in Guatemala it began to become a problem in Europe, but again we didn’t think it’d impact on our travel plans,” Woods tells The Democrat, from her quarantine base.

“El Salvador and Honduras - the two countries we had planned to go to next - closed their borders about two weeks ago so that was the first time we thought it could impact us significantly. At that stage the only option would have been to fly to Nicaragua or Costa Rica.

“Guatemala hadn’t taken any action at that stage, but at 2pm last Monday (March 16) the President announced that they were closing the airport at midnight.

“That meant flying to Nicaragua or Costa Rica, our Plan B, no longer became an option so we didn’t really know what to do.

The next day there were further restrictions announced whereby public and private transport were banned. The President just announced it and that was that.”

Staying in a hostel with several other European ‘backpackers’, the pair became increasingly unsettled as locals began to suspect the tourists of bringing Covid-19 into the country.

“When the President made the announcement, we went to the supermarket and you could sense from the locals their worry.

They would cross the street when they saw us, they didn’t want to be walking on the same side as us.

“In the supermarket they would deliberately not walk down the aisles we were walking down because, in their eyes, we had brought the virus to Guatemala; it was a European problem.

“It wasn’t a place where we felt very safe and the locals were concerned about not being able to make a living - the President had closed everything. We felt they might turn against us so I got on to the Irish Embassy. They were very good, but their knowledge of the situation was as much as we knew; they’d no additional information.

“Their advice was to leave and the only way out was to cross the border into Mexico and hope for a flight from there, because the airports in Guatemala were closed.

“We made a decision at 9pm on Wednesday night that we’d leave on Thursday morning at 5am and hope for the best.”

With no publically viable way to make the five-hour hike to the Mexican crossing, they, along with a few other groups, hired a shuttle bus and a driver, who provided hand sanitiser and masks upon the outset of the journey.

However, fear remained that they could be left stranded with reports indicating the borders would be closed. Rumours even circulated suggesting that police officers were commanding bribes to allow people to progress.

Fortunately, they made it across, their driver saying it would be the last such opening, and from there they travelled to Tapachula Airport and on to Mexico City, via Guadalajara, where a return flight to Dublin was availed of.

On the move from early Thursday morning until arriving in Dublin more than two days later, Marina went 36 hours with no sleep. But, having been in touch with some of those who remained, it was certainly the correct decision as uncertainty is reigning at where they had been staying.

“We’ve been in touch with the other backpackers who are still there and they’re saying that it’s a ‘ghosttown’ and there’s not a lot of backpackers left. They feel they might be locked in the hostel soon and that was our concern.

“Aoife’s family home in Waterford is empty at the moment so we’ve been self-isolating here ever since. I haven’t been back home or seen any family or friends, but I suppose that’s the same for everybody at the minute.

“It’s been strange to go from travelling every day to sitting inside all the time. It’s been difficult to get used to, but that’s the new normal now, isn’t it?”

How is she health-wise?

“I’m feeling absolutely fine and hopefully that’ll stay the same. The symptoms mightn’t display if we do have anything, because we did have four flights in quick succession and the flights were nearly full with everyone sitting beside each other. Fingers crossed we don’t get any symptoms, but at the minute we’re lying low and trying to stay away from everyone.”

An accountant for an insurance firm in Dublin, a job which she left prior to setting off earlier in the year, Marina had planned to emigrate to Toronto after her Central American voyage. Indeed, only for Canada had shut itself, going directly there was an option prior to the Guatemalan airports going into lockdown.

She celebrated her birthday when in Mexico. That milestone, along with everything else, makes the trip one to remember.

“That’s an understatement, definitely. I was having the best time of my life up until a few days ago. It’s certainly been a story, let’s put it like that, and I’ll remember it for a very, very long time. I feel like I’ve unfinished business in Central America.”

Marina also did a travel podcast, named ‘Eat. Sleep. Leap. Repeat.’, while away and listeners can find it on the Podbean app.