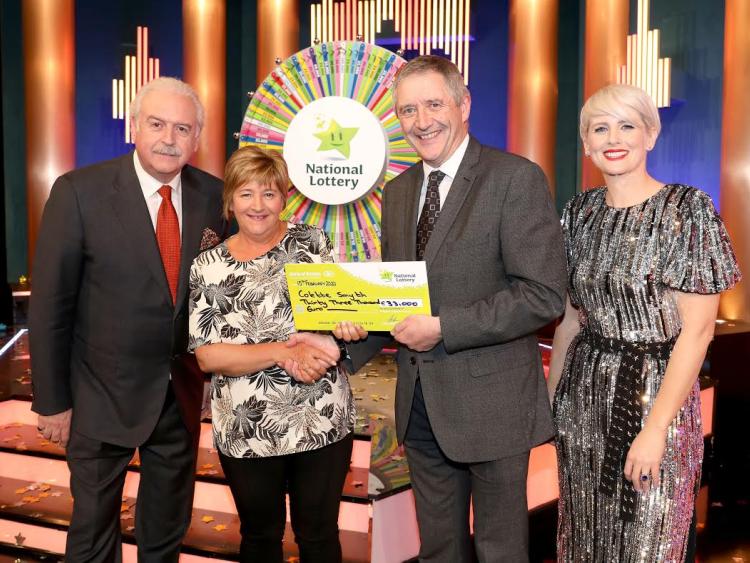 A Louth woman won a €33,000 Winning Streak bonus when she appeared on the National Lottery TV game show, last Saturday (15th February) on RTÉ One.

A couple of weeks ago, Colette was sitting in a Chinese restaurant enjoying a meal with members of her family when the call came through from a cousin to let her know her name had been drawn from the Winning Streak drum to appear on the next show.

Call after call came through from friends and neighbours which caused quite a stir in that restaurant. It was music to Colette’s ears as she celebrated her stroke of luck then and there!

Since that Saturday Colette has been overwhelmed by the good luck and congratulations messages she has been receiving from her neighbours in the Ardee community and the entire town tuned in to see her on RTE.

Colette is married to her husband Ray for the past 16 years and the couple have five children aged from 23-34 and are all were excited to cheer her on from the RTE. Their names are Sharon, David, Alan, Ciaran and Michelle. Colette is also a proud grandmother to two grandchildren: Chloe (9) and Nathan (2).

By day Colette works as a cleaner in Ardee Community School, where she has worked for more than eight years. In her spare time, one thing Colette likes to do is play bingo with friends, which she plays in Dundalk.

The Winning Streak National Lottery TV game show is co-presented by Marty Whelan and Sinead Kennedy and features some perennial favourite games including Play or Pay, Roll for Riches, WinFall and Electric Dream – where one player will win an electric car worth €25,000.

As ever one of the lucky five players will get the chance to spin the wheel and win up to €500,000. An exciting element of the show is that one €100,000 segment will be added to the Grand Prize Wheel every show if less than that amount was won in the previous show, improving players chances to win a massive prize.

A new-look Winning Streak scratch card is available in more than 5,800 National Lottery retailers all over the country. In addition to the chance to appear on the Winning Streak TV game show if you get three stars, players will also be in with a chance to win some great cash prizes up to €5,000.

The odds of winning a cash prize or a three star prize for those who purchase a Winning Streak scratch card is 1 in 1.86. All players who purchase a scratch card can send their stubs into the National Lottery using grey envelopes, available in all National Lottery agents, where each week on the show, a player will be drawn as the winner of a Luxury Cruise for two valued at €5,000.