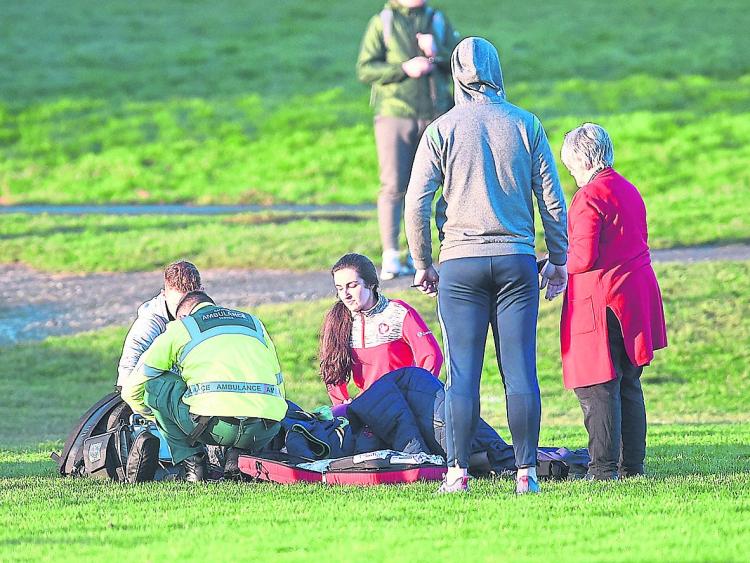 The Democrat can reveal that a young footballer was left lying in agony for at least an hour on a GAA pitch, while awaiting the arrival of an ambulance last week.

The incident occurred late last Wednesday afternoon at a pitch at DkIT's sports grounds - less than one kilometre from the Louth County Hospital, just up the Dublin Road in Dundalk.

The player sustained a bad leg injury during DkIT’s Trench Cup match with Limerick IT.

A paramedic-on-call arrived to comfort and tend to the Limerick IT player, but the young man could not be moved off the ground until the ambulance arrived as darkness began to fall.

The match was stopped for an extended period, before eventually resuming on a second pitch further down at the DkIT’s sports grounds, all the while the injured player waited for an ambulance on the top pitch. It eventually arrived at least an hour after the incident occurred.

Local TD, Declan Breathnach branded the response “not good enough”, adding that there are only two ambulances available in Dundalk each day.

He continued: “It is not good enough for members of the public to be left waiting in such conditions.”

Local councillor, Ruairi Ó Murchu labeled the incident “absolutely unacceptable”, adding: “there is an ambulance station at the Louth County Hospital, so in theory an ambulance should have been able to reach this individual in a matter of minutes.”

Deputy Breathnach explained the background to the ongoing shortages impacting the service.

“There are only two ambulances in Dundalk and these could be gone for the day – say if a patient from Carlingford needs to be taken to the Lourdes, this would take 50 minutes and they could be waiting an hour at the Lourdes to get the patient out of the ambulance, such is the problem with over-crowding.

“Similarly, one of those Dundalk ambulances could be gone for the entire day on a job taking a patient to a hospital in Dublin.”

“We also know that many ambulances in use in the Leinster area are too old and have too high a mileage. This is particularly worrying as there have been incidents in which ambulances have broken down while carrying out emergency work.”

He added: “Ambulance personnel do a lifesaving job, often in very demanding circumstances. It is unacceptable for ambulance staff and patients alike that safety is being jeopardised by under resourcing.

“I have written to the National Ambulance Service to query the causes of this incident and I wish the individual involved a speedy recovery.”