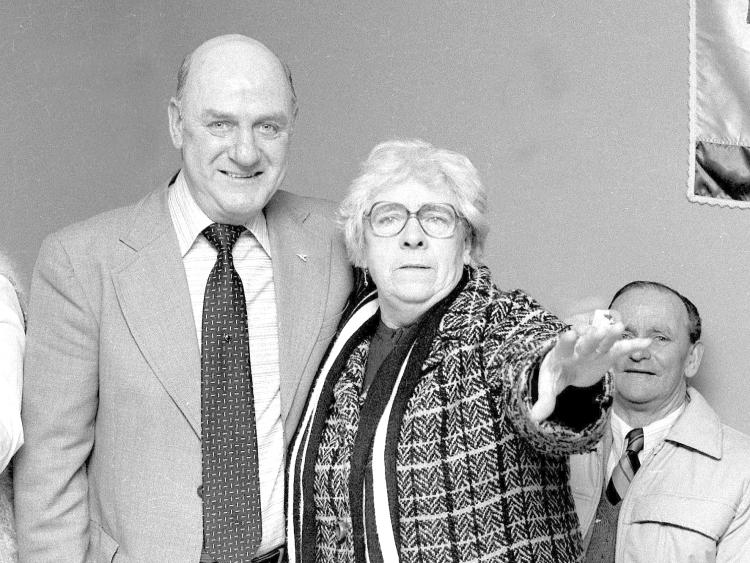 SNAPSHOTS COMPETITION: To enter, all you have to do send your photos to pictures@dundalkdemocrat.ie to be in with the chance of winning a fabulous prize. Don’t delay!

She is pictured with former Northern Ireland international goalkeeper, Ted O’Neill. Arthur recalls that Mary was a “great supporter” of Dundalk FC, and indeed one of the only women who would have attended games at Oriel Park at the time.

Arthur added: “Mary was orginally from St Nicholas Avenue. She was the main woman up at Oriel Park. She travelled everywhere for games. Whether they played in Cork, Dublin or Galway, Mary was always there.”

Mariah, as she was fondly called, was known to berate the players as they came off the pitch if they didn’t perform to their usual standards - she made no bones about making her opinion heard about her beloved team, the Lilywhites.

Ted McNeill was also a well-known individual up at Oriel Park, and, according to DundalkFCWhosWho: “McNeill was the fourth and last keeper to be started by Dundalk in the 1954-55 season, making his debut against Bohemians with half a dozen games left, and for the following four years he was an automatic selection—alternate choices like Paddy Shevlin and Paddy Neville were dependent on Ted’s rare absences through injury for the odd game.

“With Ted at the top of his form, and the local duo of Ralph-Finn nailing down the full-back spots, the team swept through the 1957-58 FAI Cup campaign, keeping a clean sheet throughout the 5 games, and defeated the mighty Shamrock Rovers—Coad’s Colts—in the final.

“McNeill had a magnificent game with a performance that had him nominated Sport Star of the Week by the Irish Independent."

ABOUT OUR COMPETITION SNAPSHOTS

We have all become used to scrolling through the galleries of photos on our smartphones but what about those much-loved print photographs stashed away in the attic, in a box under the bed or in that “miscellaneous” drawer in the kitchen? Are they destined to be forgotten forever in the digital age?

Well, it’s time to dig them out and show them some love.

We want readers to take a photo of those much-loved print photos and send them to us. Whether it was taken a few years ago on an instant camera or a few decades ago, we want the photo that stands out for you.

It can be from a social event, a landscape shot, a funny pic or even a holiday snap - we want them all. Yes, even those dodgy “look at the state of my hair” debs photos!

Send us your photos

We want you to dust off the golden oldies, take a picture of your old picture and email it to us editor@Dundalkdemocrat.ie
We will feature your pictures in both our print and online editions. In addition to running your images on dundalkdemocrat.ie and our social media pages, we will also carry two pages of your images every week in the Dundalk Democrat.

We will run a poll every week on dundalkdemocrat.ie and our weekly online readers can vote for their favourite image of the week.

Two winners will go forward every week, leaving six of our readers images going forward to the grand finale with a chance to win our amazing prize package.

The overall winner as voted by the public will win the fantastic prize.