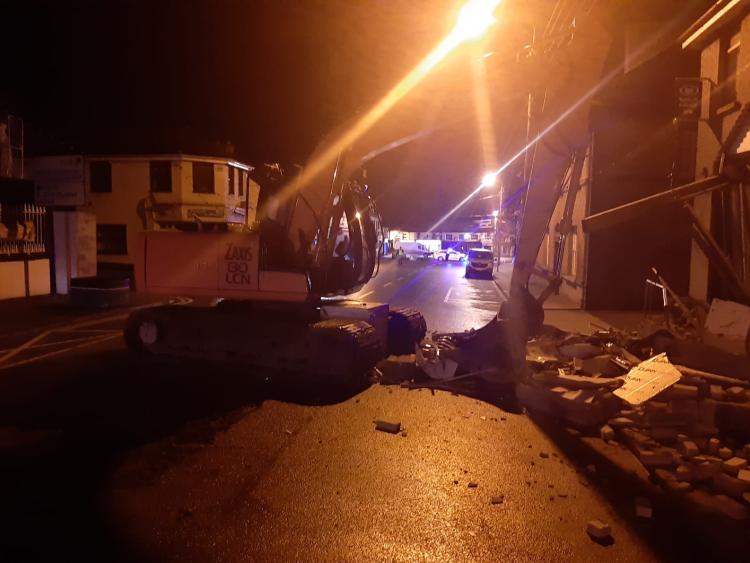 There has been widespread condemnation following the early morning attempt by raiders to take an ATM from Main Street, Dunleer.

It is the second such attempt using a digger to try and remove the ATM from the premises - causing significant damage in the process - following the first attempt in November 2019.

Members of An Garda Síochána attached to the Garda Armed Support unit intercepted the attempted ATM theft at approximately 4.30am this morning.

Gardai were patrolling the area at the time and managed to intercept the attempted theft and a pursuit ensued onto the N1 in which the culprits made their way over the border.

The PSNI say they are assisting an Garda Síochána in their searches.

“This is not an isolated incident, but one of the many ATM raids in the border region over the past few months. I fear now that ATM services in Dunleer and across the region will be withdrawn as the risk of a raid increases. This is a huge threat to community and businesses in the area. The vast majority of people living on both sides of the border are decent law-abiding citizens who may lose out on vital services because of the actions of these thugs.”

He added: “Crime in Louth is simply out of control. The feud in Drogheda has led to shootings and murders becoming commonplace. We urgently need more Gardaí on the ground. In the short term we may need to look at the possibility of reducing the operating hours of an ATM between midnight and the early morning. There is technology available which can turn off the ATM and automatically transfer it into a secure bunker.”

Breathnach says he has previously called for the establishment of a cross-border crime agency to stop criminals evading capture by crossing the border. Currently, chases of cars involving Gardaί or the PSNI have to end at either side of the border. Breathnach says this is an “operational gap” on the island of Ireland which was being exploited by criminal gangs.

“This is the second time Dunleer has been targeted with the first one taking place in November and the thieves getting away with an undisclosed sum. This time however, Gardaí were on patrol in the area and came across the would-be robbers and they fled the scene heading for the border.”

Cllr McGeough commended the Gardaí for their rapid response.

“I understand that they crossed the border and the PSNI are co-operating in this search.”

He added: "This is an attack on the community and on the business community. The road has been closed off and that will cause disruption to businesses in the area and shoppers and residents are now without access to the ATM.

“The inconvenience caused to shoppers and businesses lies solely at the feet of the thieves who are attacking small communities like ours up and down the country.

“Once again, Gardaí resources have been discussed and we have seen the importance of having patrols in rural areas like this.

“Myself and Deputy Imelda Munster have been very vocal on this issue and are hoarse screaming for more resources to be allocated to Louth Gardaí, especially the rural areas. There was some success last August when a criminal gang who carried out a spate of ATM robberies were apprehended in County Cavan following a joint operation between Gardaí and PSNI but we need more of that. These robberies are still happening and they are even brazen enough now to attempt to rob the same machine more than once. We need to keep the pressure on.”

Cllr McGeough also asked the local community to remain vigilant in the future.

“Gardaí can’t be everywhere but there are things that we as a community can do. Keep your eyes open for any suspicious activity around ATMs, any strange vehicles in the area and also be aware of heavy plant and machinery moving at night. I would also urge owners of plant and machinery to ensure they are secure and immobilised at night when they are not in use.”