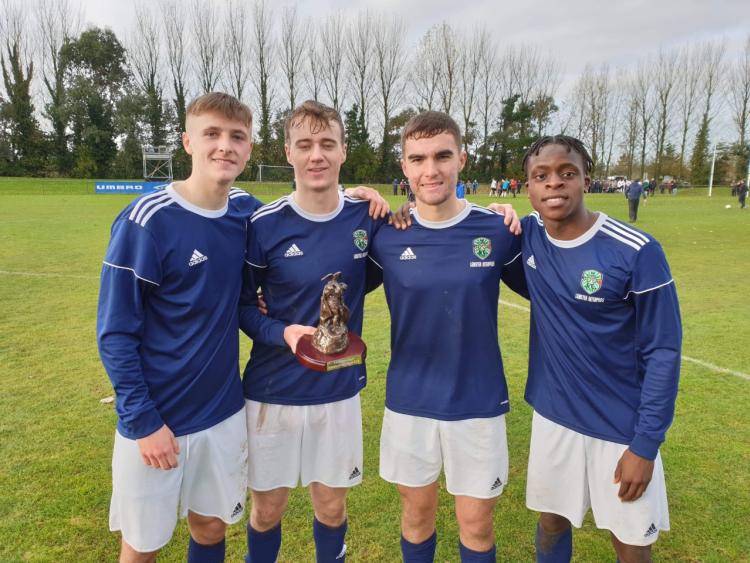 Trials started last May for aspiring players from all over Leinster, and included challenge matches against the Irish Defence Forces team (3-2 defeat) and the Ringsend ETB FAI participants (6-1 victory).

The four local lads made it into the 16-man Leinster squad for the annual Interprovincial tournament in the AUL two weeks ago. The tournament pits each province against one another, and also acts as a showcase for the Irish Schools Management team. Irish underage managers Andy Reid and Tom Mohan were also in attendance over the weekend.

This year Leinster started their campaign with a 3-1 victory over Munster on the Friday evening, which was then followed up with a 5-0 victory over Ulster on Saturday afternoon. The crunch match against Connacht, who were also unbeaten, took place on Sunday morning. Leinster took a 2 goal advantage, but with 10 minutes to go Connacht pulled one back. Both teams had chances to add to their tally, but Leinster held on to win 2-1 and win the tournament overall.

Former Dundalk FC centre back, Ian Ryan, is the Leinster manager and he was delighted with the performance of the whole squad.

“There was a real quality to the passing and movement of the players, and I fully expect many of these to have very bright futures in the game.”

The Dundalk connection doesn’t end there, as the assistant manager of the team is local man Fintan Sheridan.

“In my six years involved with the team, this is the fourth time that we have won the tournament. It was great to see the four Dundalk players have such an impact on the team this year, and they have given themselves a great chance to go on and represent their country through the Irish Schools team.”

After this challenge game, the Irish management team picked a squad of 28 players to move on to the next stage – all four of the Dundalk players were included in this squad. Further challenge games are in the pipeline for the Irish Schools team, including games against Australia, and the Irish u17s team.

The Centenary Challenge then starts in March, where the Irish Schools team will play the International Schools Teams of Scotland, England, Wales and Northern Ireland over two months.