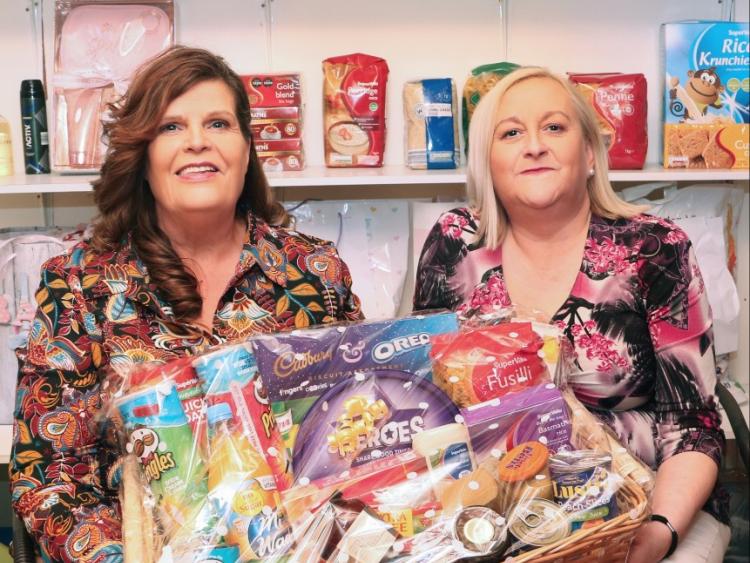 Two enthusiastic local ladies have set up a food bank in Carrickmacross in help support families in need.

"We, Irish, tend to talk and complain a lot. It is about time that we start taking care of each other in our communities," says Pauline McEnaney, the local mother of two, "charity begins at home, so they say."

Originally from Dublin, Pauline McEnaney, have lived in Carrickmacross for over twenty years. “It has become my home,” she says,” I have been through hard times myself, raising my own two daughters, so I know what it is like feeling your stomach stuck to the backbone."

Seeing a picture on Facebook recently of a five-year-old boy eating his dinner from a piece of cardboard on the street in Dublin, was the last straw for Pauline and Caroline. The two friends say that it is not only in Dublin, or other big cities that people are suffering. Well-hidden poverty is hitting rural areas pretty harshly too.

Caroline Treacy, the mother of three girls, has lived in Carrickmacross since 1986 and is well known by local folk. Pauline and Caroline have been friends for sixteen years. They both are 'people persons', good-hearted, genuine and 'good craic'. Pauline has been a social care worker for over ten years. Caroline does accountancy work in a crèche.

The two friends have never let each other down over the years, and this case is no different. "The initiator was Pauline, but she did not have to twist my arm for me to jump onto the bandwagon," says Caroline, trying to keep the humour up. "It is sad and unacceptable that parents have to skip meals to feed their children in this day and age," she says.

They have been aware of hidden poverty, like many of us have, for a long time. The two friends say: "it is heartbreaking to see what is happening in our homeland, not to mention in our own town! It is not a secret that many families have so little money left for day-to-day essentials after they pay rent and all the other bills.

"We cannot just sit back and watch," says Pauline. "We know there are big charity organizations and support groups like St. Vincent DePaul, SOSAD, Simon, Focus Ireland and many more. Even though they are doing tremendous work for people, it seems that the situation is worsening as the days go by. It seems like the poor are becoming poorer and, the rich are becoming richer. It just seems wrong!"

In a small community, people are shy looking for help. Pauline and Caroline said they have looked for help in the past themselves and were very grateful for the support that they got. It gave them the chance to bounce back. Now they want to give it back to the community, encouraging others to put pride aside for the sake of their wellbeing.

"We are not a charity organization, we are a support group", Caroline makes the point. We are hoping that people seeing familiar faces from their own community will encourage them to get over the shame and stop suffering in silence.

Thousands of people live in poverty in Ireland, and Carrickmacross is no different; it is just well hidden. The statistics show that homelessness in the country has increased by 354% since 2014. It is fair to say that most people do not want charity. They want to be able to provide for themselves and their children. To be able to get a well-paid full-time job rather than juggling between several part-time jobs. We must face the truth and deal with it together.

Pauline and Caroline set up the 'Carrickmacross Food Bank' on October 19. They say people are very generous and supportive. They are receiving messages and phone calls from the nearby towns asking how they can help. Within only three weeks the page has over one thousand authentic followers already.

"The food does not get to sit on the shelves for too long. As soon as we get donations, we deliver them to the families that genuinely need and ask for support," Caroline was happy to add. "I know nearly everyone in town, and they know me, so that makes the job easier."

The 'Carrickmacross Food Bank' is accepting donations of non-perishable food, food vouchers, and toiletries. Although the Food Bank does not handle money at the moment, they are looking for a trustee who would volunteer for the position.

"If we cannot give you enough, we will help you to reach out the right direction. We are only learning, and we do seek support from people and businesses that can help. All we want is to see our community blossom and stick together. For better or worse!

You can contact Pauline and Caroline via 'Carrickmacross Food Bank' on Facebook, Email: carrickmacrossfoodbank@gmail.com or send a message or call on 087 690 9262