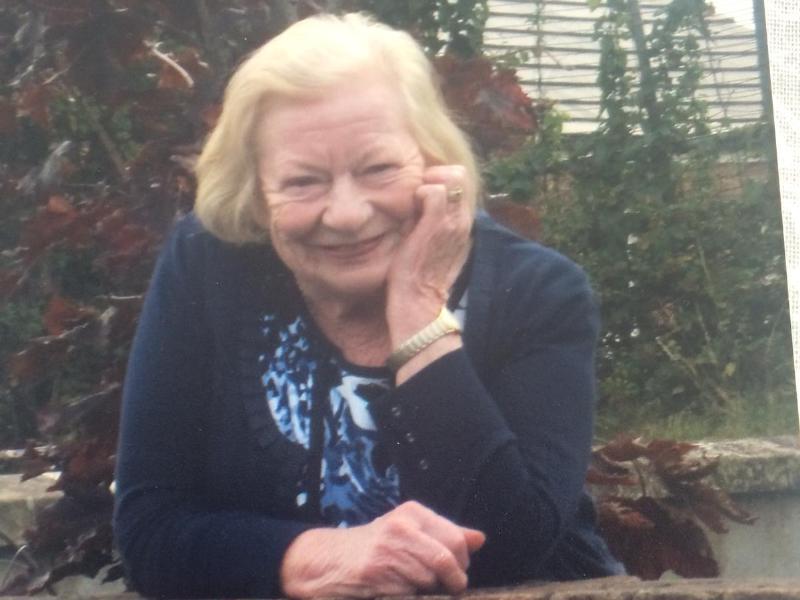 Elizabeth Traynor, Old Golf Links Road, Blackrock, who passed away on April16, 2019, was a lady who had a significant connection with the old Dundalk Shopping Centre, where her late husband Joe was a well-known butcher.

She used to go there every day where she would enjoy a cup of coffee; and she continued to visit regularly the new shopping centre in which the family business is carried on by her son, Jimmy.

Aged 86, Elizabeth was originally from Killanny, Carrickmacross, one of five children of the late Annie and Arthur Mc Bride, of whom only sister, Rosaleen survives.

She attended Killanny National School, and subsequently went to work in the Shirley Arms, Carrickmacross and then the Adelphi in Dundalk.

Elizabeth married Joe Traynor in 1956 and they had a family of seven, three daughters and four sons.

She loved looking after her family, and also enjoyed cooking and gardening.

After rearing her own family, she delighted in the arrival of grandchildren and great-grandchildren.

In the early ‘Nineties, Elizabeth returned to working outside the home in the Brands Store, Blackrock, and this gave her a new lease of life.

She was very happy there, making new friends, with whom she enjoyed catching up.

After reposing at her home, her remains were removed to Saint Fursey’s Church, Haggardstown, where the funeral Mass was celebrated by parish priest Father Pádraig Keenan.

A fitting eulogy was delivered by grand-daughter, Lisa.

Readings were given by daughter, Caroline and grand-daughter, Sara, and prayers of the faithful led by grandchildren, Fabio, Joanna, Elizabeth and Fergal.

These included a garden trowel, a plant, her handbag and a tablecloth.

The bread and wine were brought up by Eoghan, Ronan, Harry and Jack.

She was predeceased by her parents, husband, Joe, brothers, Michael and Enda, sister, Kitty, daughter-in-law, Margaret and son-in-law, Philip.