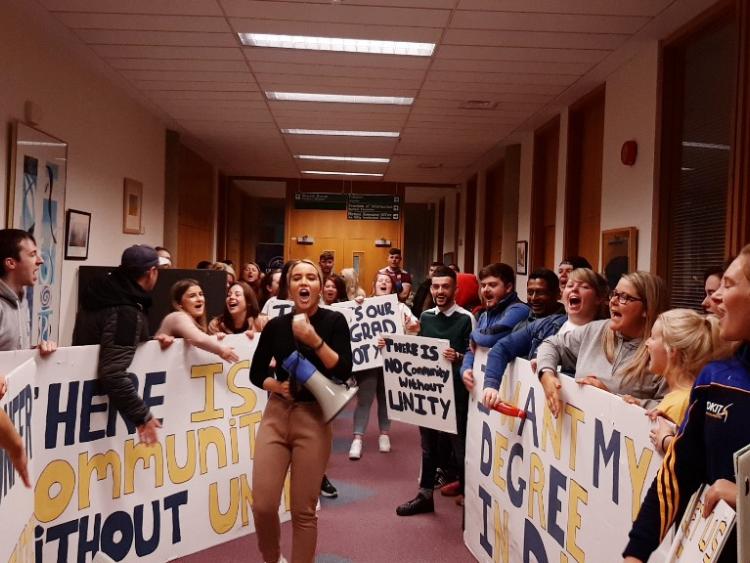 Students at Dundalk Institute of Technology are staging a protest today at DkIT calling for a reversal of the decision to move this years graduation from the DkIT campus to the Dundalk Townhall.

A large number of students have gathered outside the office of DkIT President Dr Michael Mulvey, calling on him to return the graduation to the DkIT campus, where it has taken place for the past 49 years.

The students have been protesting since 9 am this morning, with Vice President for Student Engagement, Christopher O'Neill, telling the Democrat that they to "show what the students really want, which is the grad back here on campus"

Mr O'Neill said that the Institute have not responded to their calls thus far but added that "we shall not be moved".

He added that the protests would continue for the rest of the week, including outside venues in Dundalk who are involved in this year's graduation, like the townhall.

The chairman of the DkIT branch of the Teachers Union of Ireland (TUI), Mr Kenneth Sloane, was also at this mornings protest, where he told the Democrat that there has still been no engagement from the President's Office, adding that "that's nothing new."

"This is just one particularly conspicuous incident of a culture of management, which is autocratic and increasingly dysfunctional, as you can see by the unprecedented scenes here today", he continued.

"I've been a lecturer here for 20 years and I have never known such frustration and anger amongst students, staff, administrators and managers, with the President and his conduct."