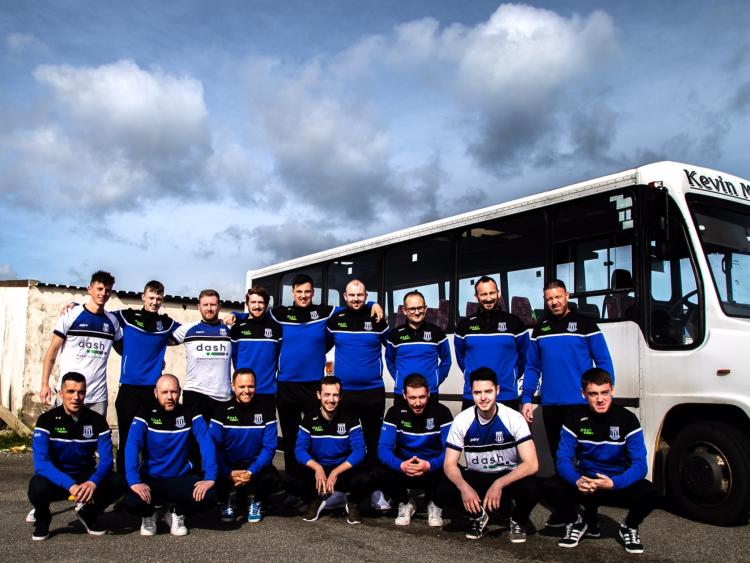 Rampart Celtic come up short after long trip to Rosslare

North Louth Winter League side Rampart Celtic came up short in the FAI Leinster Senior Cup against Rosslare Rangers in Wexford on Sunday, going down by three goals to nil after a battling performance.

Having advanced in the FAI Junior Cup last week the North Louth Winter League side, managed by Conor Neacy, were hopeful of once again springing a surprise. Ultimately despite offering a spirited fight against the hosts it was the clinical finishing from the Wexford side that made the difference.

From the early moments of the match Rosslare produced chances with swift passing and movement creating openings in the Rampart defence. A change of tactics saw the back line, marshalled by the ever green Ger Redmond, get a stranglehold on the game but halfway through the first half Mark Furlong pounced to put Rosslare ahead after goalkeeper Aaron Conway could only get his fingers to a cross and the ball fell to the striker.

Forced into chasing the game the tireless work of striker Anto Lines, scorer of both FAI Cup goals, was unlucky not to be awarded a penalty. Lines was arguably too honest when he tried to stay on his feet following contact in the penalty area.

Further chances followed but as the half time whistle neared keeping a solid defence was the key concern for the Ram Celts.
Jason Mulligan’s introduction sparked life into the Rampart midfield in the early moments of the second half with a surging run forward spurned by the home defence with Niall Walsh making a telling impact. Chances followed for the visitors but the game was starting to stretch when Aaron Goff sprung the offside trap to notch a second for the home side.

Suddenly Ramparts had a mountain to climb and with Neacy ringing the changes in the hope that fresh legs would offer a chance of a result. The best chance of a goal came in an old fashioned goalmouth scramble from a setpiece. With Mulligan rising above the fullback to bring the ball back across the face the ball fell to Redmond. In unfamiliar territory the centre-half was unlucky to see his effort turned away by Rangers goalkeeper Jack O’Leary.

From that point onwards Rampart tried to break their duck but with their best chances spurned they were caught out in the closing stages when Shane Pettit scored the third and final goal.

A workmanlike performance by the visitors deserved a goal but the difference in quality between the sides saw the stronger side earn the right to advance.

For Rampart Celtic their attention will turn to their upcoming FAI Junior Cup match  against Kildare side Ballyoulster FC.