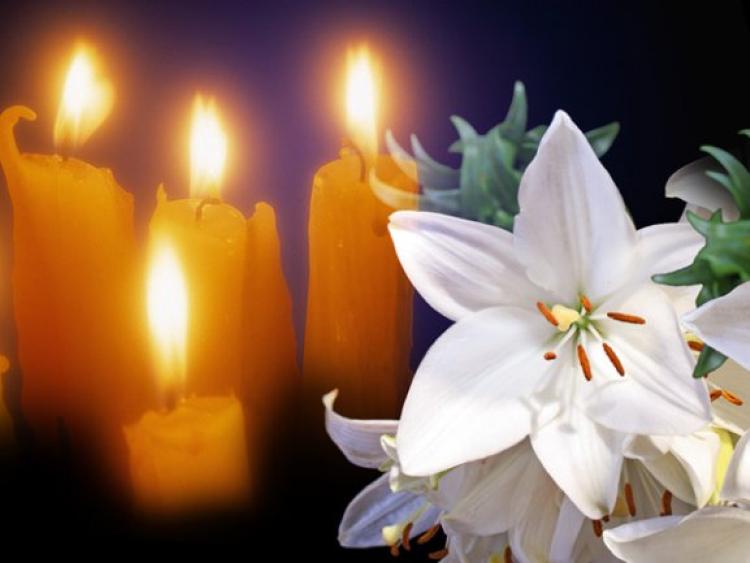 The death has occurred of Francis Carron of Ramparts, Greenore, Louth

Suddenly, beloved son of Doris and the late Paddy, dear father of Aisling and Conor and loving brother of Mary, Patrick, Caroline, Stephanie, Keith and Olivia.

Reposing at the residence of his brother Keith, Ramparts (Eircode A91 NY82) from 4pm-10pm on Sunday and 2pm-10pm on Monday.

Family flowers only. Donations if desired to the RNLI.

The death has occurred of Elizabeth Dowdall of Smarmore, Ardee, Louth

Reposing at the residence of her daughter Bernadette Farrelly, Devinstown, Lobinstown on Sunday from 5.00 pm to 8.00 pm and on Monday from 12.00 pm to 4.00 pm with removal that evening to St. Catherine's Church, Ballapousta, arriving at 6.30 pm.

Funeral Mass on Tuesday morning at 11.00am. Burial afterwards in Ballapousta Cemetery.

The death has occurred of Elizabeth (Betty) Kelly (née Corcoran) of Termonfeckin, Co. Louth and formerly of Donaghmede, Dublin

Reposing at her son Eamonn’s home on Monday between 7pm and 9pm.

Removal on Tuesday, 8th October, to Our Lady Mother of Divine Grace Church, Raheny, arriving for 10am Funeral Mass, followed by cremation in Dardistown Crematorium.

Family flowers only please, donations if desired to a charity of your choice.

The death has occurred of Thomas King of Summerhill, Louth Village, Louth

Reposing at McGeough's Funeral home, Jocelyn Street from 2pm until 5pm on Sunday.

Removal on Monday to Church of the Immaculate Conception, Louth, arriving for Mass at 11am. Burial afterwards in adjoining cemetery.

The death has occurred of Charles McKeown of Rath Abbey, Grange, Carlingford, Louth

Peacefully, at his residence. Beloved husband of the late Mary and dear father of Elizabeth and the late Charles. He will be sadly missed by his loving daughter, brother Patrick, grandchildren, nephews, nieces, relatives and friends.

The death has occurred of Tom White of Edgemount House, Jenkinstown, Dundalk, Louth

Late of Whites Transport. Suddenly at the Beacon Hospital, Dublin, surrounded by his loving family. Predeceased by his parents Rose & Pat and recently deceased by his beloved wife Ann (née Brennan).

Cherished father of Patricia, Rosaria and Anita. Tom will be sadly missed and remembered with love by his daughters, son-in-law John, doting grandchildren Alex and Zack, brothers Pat and Kevin, sister Maura Rainey, sisters-in-law, brothers-in-law, nieces, nephews, extended family, neighbours and all who knew and loved him.

Removal on Monday morning at 11.30am walking to Our Lady of the Wayside Church, Jenkinstown (Eircode A91A583), arriving for Funeral Mass at 12 o’clock. Thereafter driving to Calvary Cemetery for burial.

The death has occurred of Michael Cooney of Cedarwood Park., Dundalk, Louth

Reposing at his home from 2pm until 8pm on Sunday. House private at all other times.

Removal on Monday afternoon to the Church of the Holy Redeemer arriving for Mass at 1.30pm. Burial afterwards in St Patrick’s Cemetery.