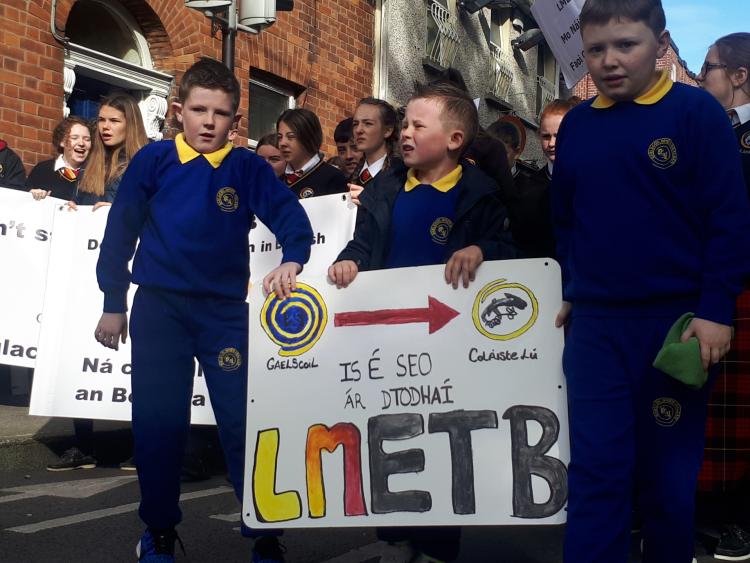 Following the intention of parents of students at Coláiste Lú in Dundalk to pursue High Court action, there is fresh hope today that the ongoing "crisis" at the Irish school could be resolved.

Parents and students at Coláiste Lú, which is described as having 'Aonad status' at Colaiste ChuChulainn in Dundalk, had taken to the town's streets last week in protest at the withdrawal of resources at the Irish medium educated school.

In a statement to the Democrat today, the Secretary of the Coláiste Lú Parents Council, Aidan Kinsella, explained the decision to propose High Court action:

"Coláiste Lú parents have come to the conclusion that they have been left with 'no choice' but to file an application to the High Court in a fight for the right for students of Coláiste Lú to continue to receive Irish medium education."

Following the issuing of a letter regarding potential High Court action, the parents' council say they subsequently received a response from Louth-Meath Education and Training Board (LMETB).

The Coláiste Lú Parents Council statement added: "LMETB then contacted parents representatives inviting them to a meeting to discuss issues. Despite the tardiness of (the) response, parents responded swiftly to receipt this invitation and expect to meet with LMETB early next week."

Separately, work has also been ongoing to bring about an amicable and successful conclusion to the crisis, the statement says.

"A local TD arranged to meet the Chief Executive of LMETB, yesterday (Wednesday September 11), on his own, to discuss the situation and listen to LMETB proposals. A second Louth TD has arranged to visit Coláiste Lú in an attempt to find out what has caused the problems currently facing the school. Parents are hopeful that these discussions may lead to further meetings and a productive resolution to this crisis."

The parents council statement emphasised the extent of the impact of the ongoing dispute on the school.

"Parents have also been advised that, as a result of the lack of Irish medium education in Coláiste Lú, of the 30 sixth year pupils of the primary feeder school, Gael Scoil Dún Dealgan, that not a single pupil is now applying to go to Coláiste Lú, with all intending applicants rescinding their applications.

"This will be a major blow to Irish medium education in the North East and will effectively be the end of Coláiste Lú. This comes on top of continuing haemorrhaging of pupils away from the school, with two more pupils leaving in the past week and more expected. The school has now lost over 12% of its pupil numbers since summer holidays began."

The Democrat contacted LMETB today to seek comment, but received no response at the time of publishing. Previously the board said they had reported "a shortage of suitably qualified teachers to teach through the medium of Irish for the Aonad at Coláiste Chú Chulainn, Dundalk and Coláiste Pobail, Rathcairn."