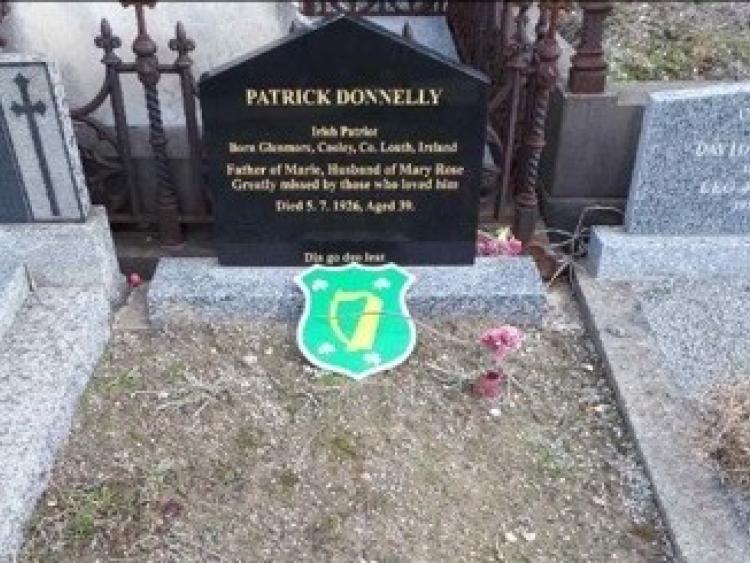 It's a small mystery which has stumped relatives from Glenmore on the Cooley peninsula all the way to a small town in Victoria, Australia.

In what appears a random, but poignant gesture, a green wooden plaque was placed anonymously on a grave - some 10,000 miles away in the town of Heidelberg in the state of Victoria - of a Cooley man who took part in the 1916 Rising.

The extended family of 1916 volunteer Patrick Donnelly have no idea who placed the plaque upon his grave, and are seeking to trace the kindly person(s) who left it there.

It was noticed earlier in the summer, but nobody is sure of exactly when it was placed.

According to local Irish group Irish Australian Support and Resource Bureau, the family are "very touched" by the gesture and are keen to meet the person to thank them.

Patrick's is one of the more tragic stories of any of the volunteers who took part in the 1916 Rising.

He was known affectionately by friends and family as 'Paddy' and was married to Mary Clarke from Quay Street in Dundalk at the time of the Rising. He was a diligent tailor by all accounts and a staunch member of the Irish Republican Brotherhood. 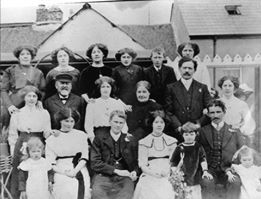 PICTURED: Patrick Donnelly (front and centre, with blonde hair) at his wedding to his wife Mary Clarke from Quay Street at the reception, which was held in her parents house in Barrack Street

At this time his wife was expecting twins. Given that situation, there was much discussion with a fellow volunteer - Michael Ferguson - on Good Friday as to whether or not Paddy should take any part in volunteer actions that fateful Easter weekend.

However, according to the official military Witness Statement, No. 353, of volunteer James McGuill, given years later in February 1950, Paddy's wife would hear nothing of it and is reported to have said: "Ferguson, you are not going to prevent my husband taking his part in whatever is taking place, as I don't wish that any person should be justified in saying to my child your father was a coward."

And with that Paddy Donnelly joined the ranks and marched with the Dundalk Corps. on Easter Sunday.

The local volunteers marched to Slane with the intention of eventually making it to Dublin, but there was a mix-up with orders and they were under the impression that they should return home on the Monday.

At this same time, Paddy's wife had given birth to twins, but she was seriously ill. Her sister Lucy, hearing that the Corps were returning home, decided to get a message to Paddy to inform him of the grave condition of his wife.

Via her connections with Cumann na mBan, Lucy got a message through to Paddy. However, at the same time, the volunteers' orders were changed once again and they were instructed to head to Dublin once again to take part in the fighting.

James McGuill recounted what happened in his witness statement: "Poor Donnelly was shocked and distressed by the bad news received, but he informed his sister-in-law that he considered that the call of duty to Ireland could not be ignored by him and he again marched away for Dublin with the Corps, and did not return to Dundalk until after the surrender."

Paddy made it to Dublin and was in the fighting zone in the capital when the surrender occurred. He was arrested and sent to prison in England. Paddy's wife and newborn babies were stable for the time being.

Tragically, in early December, just weeks before he was due to be released, Paddy received a letter which informed him that one of his children had died, he immediately applied for parole to return to Ireland to be by his grief-stricken wife’s side. Once the parole period had lapsed, he returned, once more, to prison in England. Once there though the general release of 1916 prisoners had begun and he made his way back across the Irish Sea.

Mary was gravely ill upon his return and died soon after - the effects of the traumatic birth of her twins finally took the ultimate toll.

A distraught Paddy would go on to take part in the War of Independence, and would once more be arrested and interned for a period.

The Cooley man contracted TB during this period and was struggling with the debilitating effects of the disease. He decided to emigrate to Australia in an effort to try and improve his health.

He moved to Victoria and on to the town of Heidelberg, which is now a suburb of Melbourne. He took up employment as a tailor once again. But a much-hoped for fresh start and new beginning never happened for Paddy.

He wrote home to family back in Cooley telling them about his declining health and his ultimate regret at leaving Ireland behind and coming to Australia.

Upon hearing of his plight, supporters of the cause back in Ireland desperately tried to raise funds to bring Paddy home.

Enough money was raised in Dundalk to pay for his passage to Ireland. The money was sent to him in Australia. But it would prove to be too late in arriving.

Paddy's health had continued to deteriorate further and he eventually succumbed to TB in July 1926, aged just 39. The money raised to try and get him back to Ireland - the country he had fought for and sacrificed so much for - was used to pay for his funeral expenses and his burial at the cemetery in Heidelberg.

James McGuill finished his story about Paddy with a poignant epilogue:

"Donnelly's case is typical of many other great fighters for Irish Freedom who gave of their best in resources and self-sacrifices to be forced later on by economic pressure and the disillusionments of the Civil War years to leave the Ireland they fought for and loved, never to see their country again."