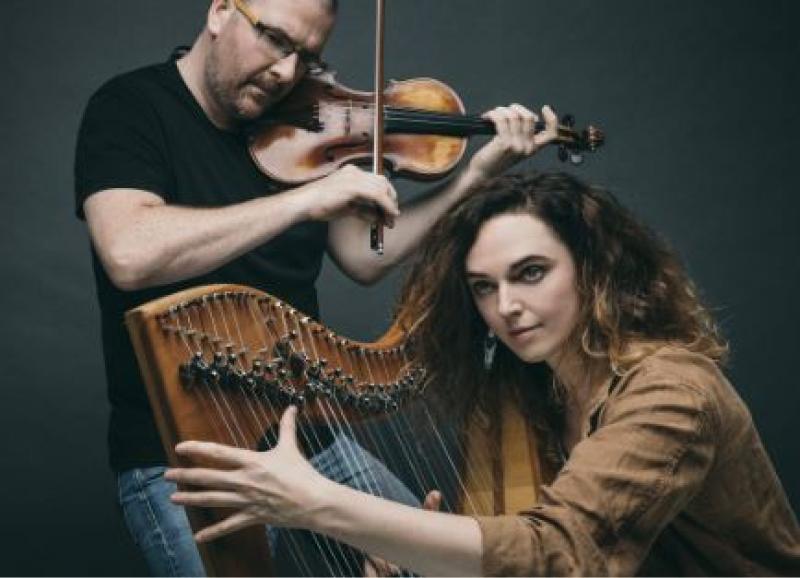 Zoë Conway and John’s McIntyre guests for the second concert of their 2019 summer series are two of Scotland’s most renowned and sought after traditional musicians, fiddler Chris Stout and harpist Catriona McKay.

Catriona was voted ‘Instrumentalist of the Year’ at the Scots Trad Music Awards in 2014. Like John and Zoë, they defy easy categorisation and play across all genres.

Also in common with our hosts who regularly accompany the RTE concert orchestra these days, Catriona and Chris frequently play with the Scottish Ensemble. Last year, they performed a double concerto for Shetlands fiddle and Scottish harp, which recounts musically the adventures, emotions and vistas of a sea journey from Dundee to the Shetlands.

The exciting, uplifting and beautiful Seavaigers, written for them by Sally Beamish, now available as a CD, has been widely acclaimed throughout Scotland and internationally.

No strangers to the concert stage, they are equally at home in the intimate setting of a fisher-family cottage on the East Neuk of Fife, composing and performing Louise’s Waltz. Chris recalls one of his more unusual settings being a cave halfway up a mountain in Northern Norway.

Their current album has a direct, no-nonsense, almost streetfighter ring to it – Bare Knuckle. Looking forward to hearing
and seeing some of that!

Anyway, the setting on Sunday, 4th August is the simple, light-filled and gracious Carlingford Heritage Centre. As has become the tradition, John and Zoë will open the performance with a miscellany of tunes and songs, old and new, many of their new compositions.

Catriona and Chris likewise will then come on stage to play some of their repertoires and by the end of the concert, these four uniquely talented musicians will be together to produce their fusion of the best in modern Scottish and Irish traditional music.

Not one for music lovers to miss! Concert commences at 4pm. Tickets €12 (concession €10).

Please note that the concert will start at 4pm sharp. Parking is an issue in Carlingford on Sunday and patrons are advised to arrive early.