Angela was involved in local community 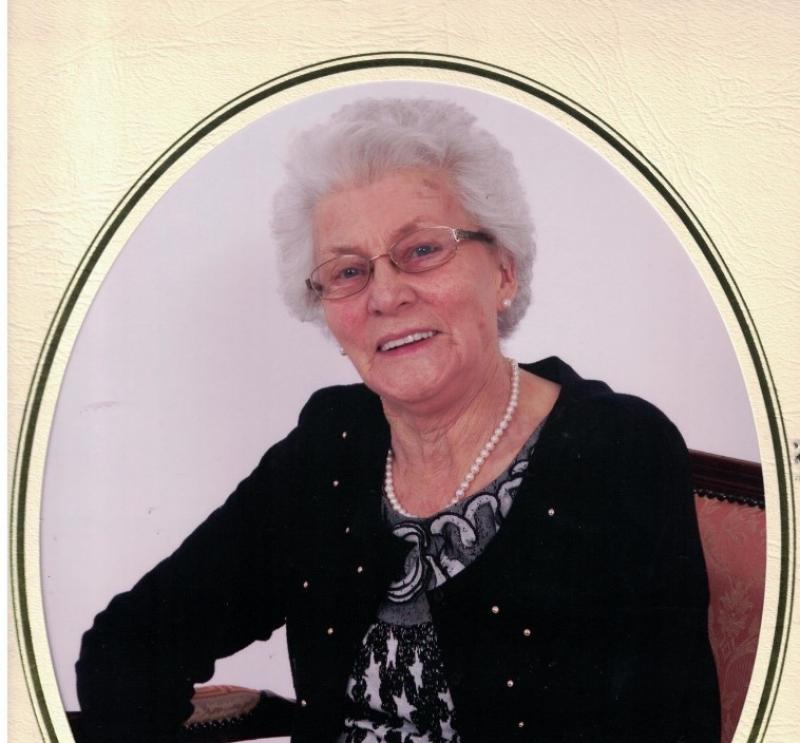 The death occurred peacefully at home surrounded by her loving family of Angela Malone (nee White) on Thursday, April 18, 2019.

Predeceased by her husband Stephen and son Tony, parents and brothers, she is survived by her sisters, Annie and Kitty, sister in law, Susie McGuigan, her son Seamus, daughters, Regina, Gertrude, Eilish, Antoinette, Caitlin and Angela, 13 grandchildren, two great-grandsons, daughter in law and sons in law.

Born in Ballinamara to Elizabeth and John White, Angela was the youngest of eight children
She married Stephen Malone and together they had eight children, one of whom died in infancy.
Angela worked in Ecco in Dundalk before taking up a post as part of the ancillary staff in Bush Post Primary School, Cooley, until her retirement in 1999.

A devout Catholic, Angela was a daily mass-goer and enjoyed many pilgrimages of faith over the years to Knock, Rome, Lourdes, Medjugorje and the Holy Land.

An avid holidaymaker, Angela enjoyed many trips abroad and around Ireland with her family, she especially loved her visits to her brother Colm in Birmingham, UK.

A true giver, Angela was a member of many groups and societies in Cooley such as the ICA, Young Priests’ Society, Altar Society, 3rd Order of Saint Francis, Cooley Hall Committee and Rehab.

She also organised many fundraisers for the various societies she was a member of.

She enjoyed many hobbies in her retirement, arts and crafts being two in particular.

This was highlighted at the beginning of her funeral Mass when one for her many paintings was used in the gift offering.
A great neighbour, Angela would never see anyone without a lift to Mass during the week or at the weekends, and liked to pay visits to her friends in Cooley and surrounding areas weekly.
Angela’s grandchildren brought her great joy and a new zest for life.

She played the role of babysitter, guardian and sometimes taxi driver to them, be it football training, school drops, collections and dance practice.

The arrival last year of her two great grandsons was like a breath of fresh air to her and she adored their visits.
Angela was a supporter of Cooley Kickhams for years and enjoyed many trips to matches to see her grandchildren line out for the club.

She was especially thrilled to attend the club’s 125th anniversary gala ball in 2012 with all her family and getting to have a chat with her old friend and fellow Cooley native Jimmy Magee.

Angela reposed at the family home from Good Friday where extended family, neighbours, lifelong friends, past pupils and teachers from Bush Post Primary travelled to pay their last respects.

On Easter Monday Angela left her home for Mass at 11am in Saint James Church, Grange.
The funeral mass was celebrated by family friend Father Michael Crawley.
Gifts symbolising Angela’s life were offered up before Mass by her grandchildren, Eimear and Dylan Smyth, Euan and Ruby McArdle.

The first and second readings were read by her eldest grandson and granddaughter, Antóin Watters and Clíodhna Malone, and the prayers of the faithful by granddaughters, Ella Smyth, Emma McArdle, Blaithin Malone and grandsons, Cormac and Oisin Watters.

A poem written by her daughter Angela was recited after communion by son in law Kevin Smyth.
Hymns and music were provided by Paula Cooney and Fidelma Bellew.

Angela was carried to her final resting place in Grange Cemetery to be laid beside her son Tony and husband Stephen.
She will be greatly missed by her family and many friends.