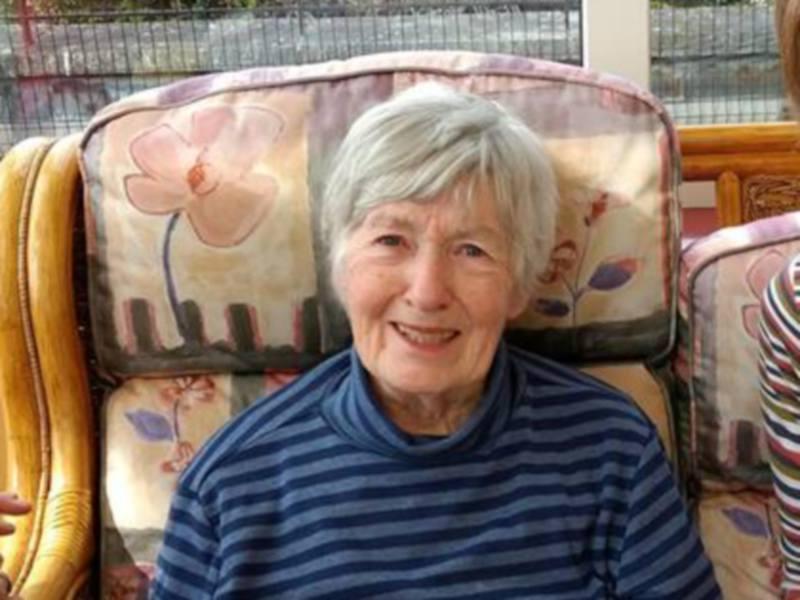 Thérése was born in Greenore on the 6th Oct 1938. After the death of her mother in 1944, she and her siblings moved to Dundalk to the Martin family home "St Leonards".

She attended the Friary National School and then St. Vincents Secondary School.

In 1957 she went to England to train as a nurse in Oldchurch Hospital in Romford qualifying in 1960 as an SRN. She worked in Birmingham for a short while before moving to Falkirk in Scotland to complete her midwifery training.

After which she moved back to Ireland and did her Fever nurse training in Cherry Orchard Hospital in Dublin and worked in St. James Hospital Dublin.

She returned to Dundalk and started nursing in Hilltop in 1972 moving to St Olivers when the move took place. She worked there until her retirement in 2003. In the early 1990s

Thérése and Martha decided to move to Thomas St. During the next number of years they shared many happy holidays both in Ireland and abroad.

Thérése never lost her nursing instincts helping to nurse relatives and friends in their own homes. Unfortunately in 2017 Thérése was diagnosed with Alzheimers, which she accepted and understood with dignity.

She was admitted to the Lourdes Hospital, and then she was moved to the Step down Unit in the Louth Hospital before being admitted to Blackrock Abbey in January.

She remained in "nursing mode "to the very end. She sadly died on the 24 April.

She was loved and respected by everyone who knew her and is sadly missed by her family and friends, especially sisters Martha and Margaret brother John, Cousin Mary McKeever, brother in law Malcolm, sisters in law Geraldine and Anne, her nieces, nephews, great nieces and great nephews cousins and wider family circle.

Thérése was predeceased by her parents Mollie and Bernard (Brian)and brothers Matthew 1946 and Brendan 2017.

The family would like to thank everyone for their messages of sympathy , mass cards etc. Fr Keenan for the lovely Requiem Mass and such personal words about Thérése .Also Fr Sean McArdle for helping to concelebrate the Mass.

Rosemary at McGough’s for all her invaluable help, and anyone who helped in any way to get us through a very difficult time.

The Holy Sacrifice of Mass will be offered for your intentions.

Thérése's months mind Mass will be on Sunday the 26th may in St. Patrick's at 11.30am