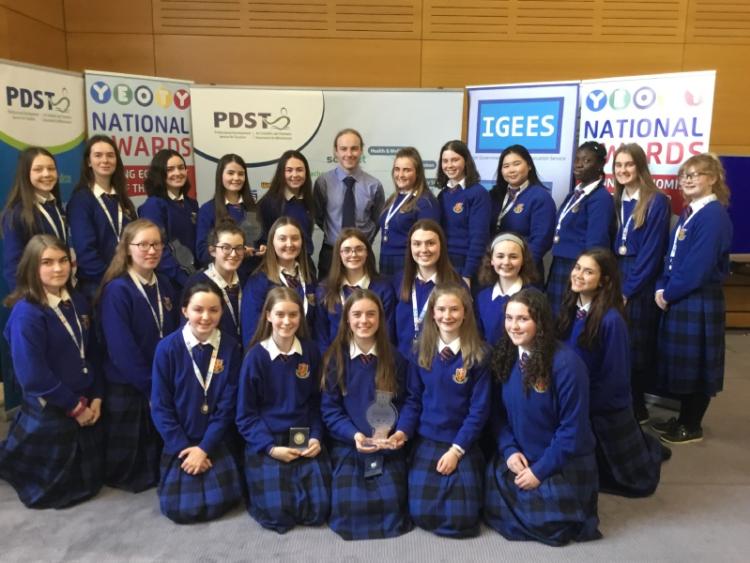 St.Vincent’s school Business and Economics students have been celebrating their recent success at the Young Economist of the Year National Awards ceremony which was held in O’Reilly Hall, University College Dublin.

The awards which are run by the Professional Development Service for Teachers, or PDST in association with the UCD School Of Education and School Of Economics showcase and acknowledge the work of students and their teachers in creating innovative projects across a range of Economics concepts and topics. The competition is in its sixth year and there were over 1,000 entries from 100 participating schools.

Teacher James Doyle detailed some of the projects involved and how the students progressed through the competition.

"We had eleven group projects qualify for the national final, with a wide range of topics such as ‘Is Ireland’s Booming Economy Just An Illusion?’ to ‘The Economics Of Fast Fashion’ and the very topical ‘How Will A Hard Border Affect Business and Employment in Ireland?’. Entries are submitted to the first round in a digital format, the majority use PowerPoint but submissions can be made using video and other formats."

He continued: "These entries are then judged by a panel of lecturers from UCD, NUI Maynooth, NUI Galway and St. Angela’s, representatives from Central Bank and IGEES. They categorize the awards under Participation, Bronze, Silver and Gold. The students are advised of this before the final in UCD, as only Bronze, Silver and Gold are invited to the Final."

Two of the projects from St Vincent’s had already received gold medals during the preliminary round, including Leah O'Shaughnessy and Sadbh Boylan for their project on ‘AI: What does it mean for the Labour Market?’. This meant they had the potential of possibly placing in one of the various category of awards on the day.

There were many different categories within the Senior Category, one of which was the IGEES (Irish Government Economic & Evaluation Service) Award for projects relating Government Policy. Leah and Sadbh were thrilled when they were awarded third place in this category. The girls also took overall 3rd place in the 5th year senior category.

As a result of this, Leah and Sadbh have been invited to meet the Minister of Finance and the Secretary General of the Department of Finance to discuss their project.

Meanwhile in the Junior Category the 2nd Year entry featured a project on 'The Rise in demand for Online Shopping and the effect it is having on High Street Stores'. Ava Plunkett, Orlaith McGeough, Aoibhínn Lucid, Davina Clerkin and Aisling Lavery were thrilled to achieve First Place in the Overall Junior Category.

James added: "This was a simply stunning achievement for the girls involved as there was no higher award they were able to win at the event. We are delighted for the winners, indeed for all the teams who qualified for the National Final."

Alongside the Economics Awards Transition Year Business students were also involved in the National Student Enterprise Awards which took place in Croke Park. The TY mini-company Sister Scrunchies which is run by Piper Kelly, Kirsten Doherty and Sarah Clarke made a successful entry to the National event for their use of Social Media in their mini-company.

They made great use of the various social media platforms, using Instagram to conduct market research and to take orders, Snapchat to run competitions, give-aways and raise awareness of their business/product and Twitter to post updates about the mini-company.

They won the award for 'Most Effective Social Media Campaign'. This was an incredible accolade for the girls to achieve as there was a very high standard nationally.

The judges were very impressed with their entry commenting that the methods used by the girls were extremely innovative and creative and that many SMEs around the country could learn a huge amount from what the girls had done. As part of the award the girls received a cash prize of €250.