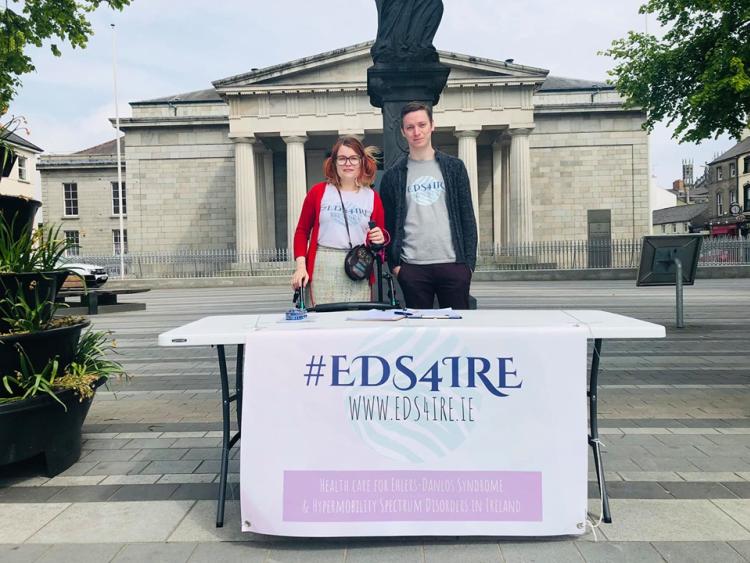 On Thursday, May 23 the #EDS4IRE campaign is inviting people to assemble outside Leinster House, Kildare Street, Dublin, for a protest between 1pm and 2.30pm. They are demanding that the government commit to providing real healthcare here in Ireland for patients of Ehlers-Danlos Syndrome and Hypermobility Spectrum Disorder.

The #EDS4IRE petition was set up by Ehlers-Danlos Syndrome sufferer Kitty Colbert from Dundalk, who like many patients has had to fundraise for tests and treatments in London.

She didn’t receive her official EDS diagnosis until her early 30’s, even though she experienced chronic pain and subluxations her entire life. Later she was also diagnosed with comorbid issues such as Postural Orthostatic Tachycardia Syndrome and Chiari Malformation (thanks to an upright MRI, only available in London and not in Ireland).

She set up the petition, and later the website to provide more information, for the greater EDS community in Ireland to use how they wish in their advocacy endeavours.

Ehlers-Danlos Syndrome is a complex genetic, connective tissue disorder resulting in faulty collagen. Collagen is known as the glue that holds the body together. Because of this fault, patients' joints can partially dislocate (sublux) and sometimes fully dislocate on a daily basis, leaving them in varying degrees of pain. As the human body contains quite a large amount of this
protein, it can impact almost every system in the body.

In Ireland there is not one qualified rheumatologist appointed by the HSE, to deal with the multi-systemic degrees of these conditions. There are a small number of private rheumatologists who have taken an interest, but they are expensive.

Patients often meet with rheumatologists who have either never heard of EDS or HSD, or who only know of outdated terminology and have minor knowledge of types, diagnostic criteria or comorbid issues.

Physiotherapists and occupational therapists who are trained to deal with hypermobility conditions are also not available in every county and can be hard to locate.

Because of delays in diagnosis (sometimes in adulthood rather than childhood), and lack of available healthcare once diagnosed, some people deteriorate at alarming rates.

The other option sufferers have is to turn to the UK, particularly the London Hypermobility Clinic. Their expertise and vast knowledge of hypermobility conditions and comorbid issues isn’t even comparable to the abysmal situation here in Ireland.

As you can imagine, these visits and tests that that cannot obtain here at home (such as upright MRI used to diagnose potentially dangerous issues), are very expensive. Fundraisers organised by family and friends and GoFundMe accounts are a common occurrence in many patients lives.

A. The London Hypermobility Clinic and many of these UK tests are private clinics

B. Patients cannot prove that they require the treatment abroad scheme if the HSE continue to insist they can access the healthcare we need here. Time is often an issue in emergency cases.

The date was chosen as May is Ehlers-Danlos Syndrome awareness month. Kitty hopes that this will be the first of many gatherings outside Leinster House calling for health care reform for hypermobility conditions, and asks that those who are affected to invite family and friends to stand with patients in solidarity on the day.

As those with conditions like EDS are known as zebras in the medical world, participants are asked to come dressed in something zebra print or black and white and bring a sign with any relatable slogan. There is a facebook event for those on social media who wish to stay up-to-date on news about the day: www.facebook.com/events/
844004075936710

If anyone is worried they may be affected by these conditions and require further information, they can contact the campaign and find details at: www.eds4ire.ie