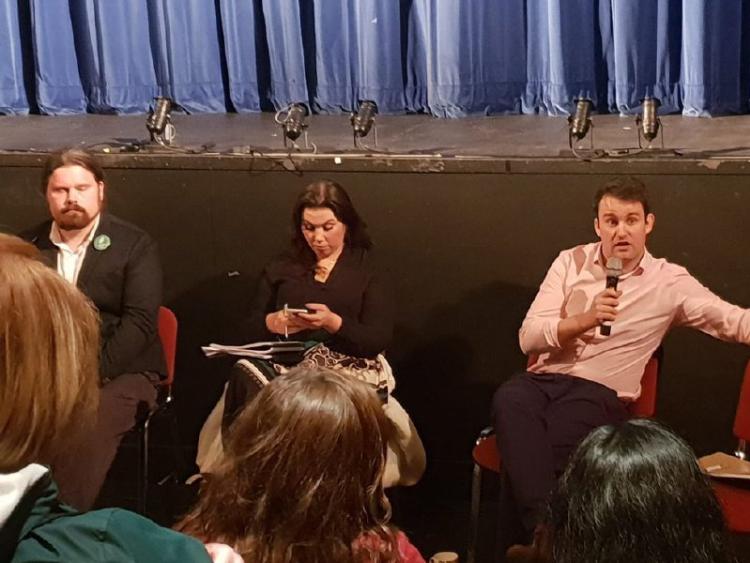 Three local election candidates were grilled on a range of issues during a lively discussion panel at an Tain Arts Centre last Thursday.

On the subject of housing Emma Coffey called for greater enforcement of the vacant site levy and promised to lobby for greater funding from central government for the housing budget. She also expressed reservations about the effectiveness of designating Dundalk as a rent pressure zone citing examples of landlords putting rents up on the eve of rent pressure measures taking effect.

John McGahon cited Louth County Council as one of “the best in the country” for using CPOs for buying vacant housing and turning them into social housing. He also stated that that too much regulation and inefficiencies in planning agencies was slowing down housing developments.

On the subject of health and underfunding of primary care centres all three candidates seemed to be in broad agreement that, as Cllr Coffey put it “we seem to be at times just mouthpieces.”

All three mentioned the lack of control councillors have on funding and that funds are designated by central government with councillors merely having an advisory role on regional health forums.

On environmental matters all three again agreed that the council should pass a climate emergency motion.

Eoin Daly said he would support council properties having to conform to a minimal standard of energy efficiency and questioned why some council houses were being built with coal fires; although he did acknowledge that some people were forced to burn smoky coal due to economic pressures.

Emma Coffey called for simple measures such as the council planting more trees and a deposit scheme on glass bottles whereby people could return used glass bottles and receive a portion of their money back.

John McGahon cited a wide range of governmental grants that should be utilised by Louth County Council to pursue green projects and expressed his wish that the council be given the means to enforce environmental laws when it comes to air pollution.

On community welfare the lack of power councillors have to allocate funding and the power of unelected officials at a local level again came up. On this topic all three agreed that locally elected Mayors with significant powers could be a possible solution that they would support.