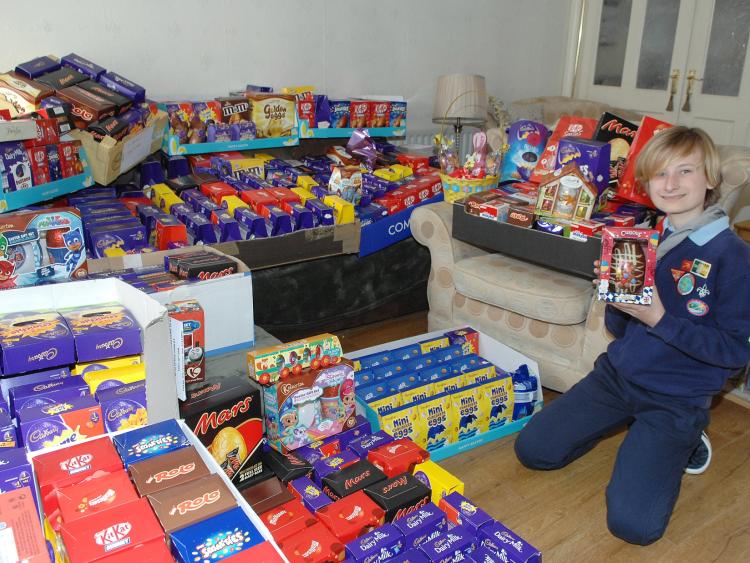 The big-hearted 5th class pupil at St. Malachy’s Boys National School decided that no one should go without a chocolate egg this Easter and set about collecting donations from people in his neighbourhood, school, scout club, dance group and even some relatives in Devon.

Speaking to the Democrat last Tuesday (April 16) proud mum Sheona McGovern explained how the local lad managed to bring his 'eggscellent' idea to fruition: “He printed up leaflets and went around neighbours houses here in Pearse Park and told them

I'll be back to collect the eggs if you would like to donate.

“So he went around collecting the donations. Now we have a spare room heaving with Easter eggs. There's a whole double bed covered in them! We're keeping the door closed so the dogs don't get in.”

Mum Sheona also told how Dealghan has had amazing support from the local community with his charity venture:

“Kevin Stanley his principal has been great as have the kids at Dance Kids, which Deaghlan is involved in. He's doing this for one of his scout’s badges, so the local scouts have been involved too. He's had so much support from all the local groups he's involved in.

“He even had a courier deliver some Easter egg donations from some relatives we have in Devon. Deaghlan doesn’t care about Brexit!” Sheona laughed.

“The whole thing has been his own idea. He told me he didn't want to see anyone not getting an Easter egg this Easter. He's always been interested in charity work. He donated his communion money to Dundalk Dog Rescue,” Ms. McGovern adds,

“The Carroll Mead houses are just behind us here, so I think he is aware of older people and thinks about them.”

But it seems Deaghlan won’t be taking a break from his charitable ventures any time soon.

His mum added: “I am very, very proud of him. You wouldn't get many 11-year-olds doing this type of thing!

“He's already talking about his next charity mission.”