Are there ghosts lingering around the old Dundalk jail? 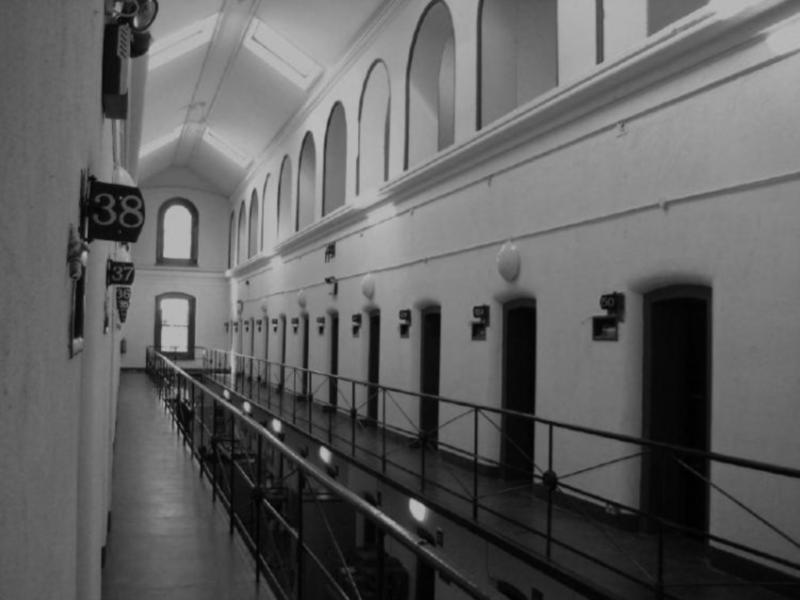 Are there ghosts lingering around the old Dundalk jail?

Walking home from Dundalk Railway Station one winter's evening recently I noted that, perhaps, the most grim reminder of 'bad old times' in Dundalk is the high stone wall of the old Jail that still runs around from the Ardee Road to St. Dominick's Place on the Carrick Road.

This old wall was erected in the early 1850s to enclose the yard of then 'New Jail' which was first opened to prisoners from all over County Louth when the 'Old Jail' off Crowe Street was closed in 1854.

The 'Old Jail' in Crowe Street was not by any means the first jail, or 'gaol' as this institution was once spelled, since the walled town was first established in the late 12th century but had a pretty grim reputation. The novelist William Makepiece Thackeray criticised the gallows that stood at the front of it when he visited the town in 1842 where the last public executions took place before a crowd of over 2,000 spectators in July 1852.

The hill on which 'New Jail' was erected had its own grim reputation long before the site was chosen as a prison. Older Dundalk people still refer to it as 'Gallows Hill' in the belief that public executions took place on its summit in the eighteen century. This belief may, however, be mistaken as old maps of the town indicated that the site of the executions in those times took place further up the Carrick Road, perhaps opposite to the entrance to Clarke Railway Station.

The idea that executions took place here may stem from the fact that Sir Henry Tichbourne had a battery of cannon placed on the hill to attack the walls of the town when he retook Dundalk from the Confederation of forces led by Brian O'Neill in April 1642. According to Harold O'Sullivan in his 'Military History of Dundalk', after the town fell to the Crown forces 'The town was then extensively pillaged and many of its inhabitants killed'.

According to other accounts Titchbourne ordered that many of the town's leading citizens for supporting the revolt of the previous year, whether they were combatants or not, be executed by being tied to the mouths of the cannons and blown to pieces.

Whether this 1642 atrocities story was true or not, it is clear that the spot had a terrible reputation for centuries and it is said that many persons who were incarcerated in it were subsequently executed.

There were also many killings around it during the Civil War and it was the site of an execution as late as January 1923 when a young man named Thomas Lennon from Dowdallshill was shot for having 'arms and ammunition without proper authority'.

The New Jail was the scene of a prolonged Hunger Strike of about 200 Republican prisoners, led by Austin Stack, which began in October 1923 and lasted for 41 days.

National Army soldiers were also killed and wounded while defending the Jail but it was not these deaths and deprivations that has been the source the ghost stories in the 21st Century.

Not long ago I heard a young woman who worked in the Crescent Jail tell about a ghost she saw in recent years. She claimed that she had witnessed the shadowy figure of a man standing at the end of one of the cell-block wings of the prison that disappeared when she approached.

She said that others had seen this figure on many occasions and believed it was the ghost of the builder who had constructed the New Jail and had been one of the first prisoners incarcerated in it.

To give some credence to this story it is true that the Jail was designed by John Neville, Louth County Surveyor, in 1950 to relieve the overcrowding in the Crowe Street Jail at a cost £1,800. When it was finished, however, the cost had gone up to £23,500 and at least one of those involved in its construction was convicted for fraud and held in the Jail.

The Jail was closed in 1931 and was converted for use by An Garda Síochána after World War 11 for use as their North Louth headquarters. That was not the end of the 'excitement' around the old Jail however!

It has been the scene of many violent events over the past 70 odd years. This had culminated during the recent 'Troubles' in Northern Ireland with the most serious riots in Town since the Civil War in September of 1972 when a mob attacked the Garda Station, AND tried to set it on fire.

Shots were fire and the rioters only dispersed when Defence Forces arrived and drove them off with tear gas!

One of the old cell-block wings is now used as a County Archives records office and a museum, while the County Civil Defences is located in the old prison yard.

Is it any wonder therefore that some old ghosts might be still lingering around the buildings in The twilight of a winter's evening?