INSIDE TRACK: Dundalk draw scuppers hopes of a weekend treble 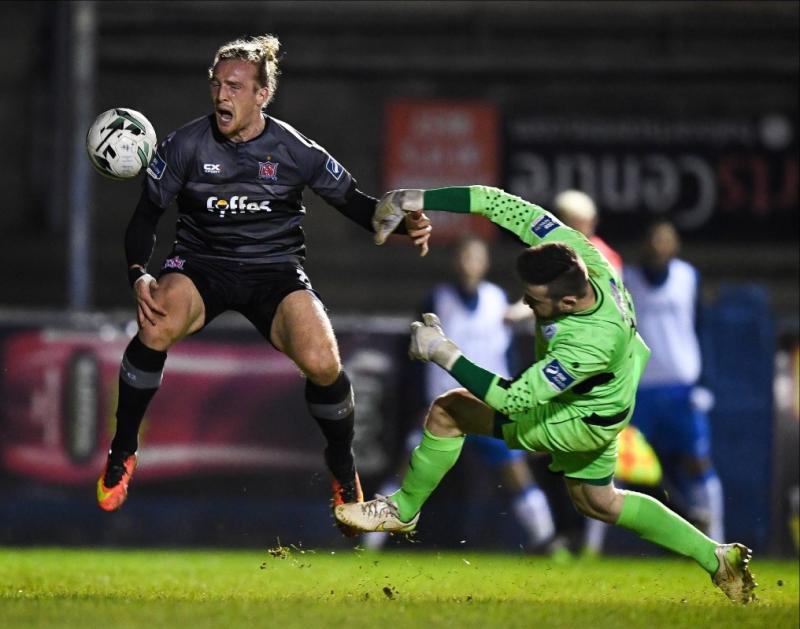 INSIDE TRACK: Dundalk draw scuppers hopes of a weekend treble

The odds about the three teams mentioned on this page last week bringing up the treble, each of them winning their respective weekend matches, weren’t very attractive. Just as well. Had it been otherwise, Inside Track might have been tempted to dip in to an admittedly shallow tank and have a tickle.

A reminder of the three - Louth senior footballers, the Ireland rugby team and Dundalk League of Ireland side. All were odds-on, the ruggers so far to the wrong side of evens, it would have taken of a modern day version of the Jubilee Plunger – look him up on Google – to get involved.

After Louth obliged, beating Sligo into a cocked hat at Drogheda and doing it without having to play any part of the game with less than fifteen, Ireland, captained by Peter O’Mahony in the absence of Rory Best – they’ll give the armband (if there’s such a thing in the oval ball game) to anyone but Robert Kearney – stumbled across the line in their Roman rendezvous with the Six Nations whipping boys.

By then, however, Dundalk were sitting on a draw, held by newly-promoted Finn Harps. This was a result which would have left treble-backers looking to the Saturday afternoon’s Eider Chase at Newcastle or the Winter Derby at Lingfield to try to recoup losses.

Louth 5-16, Sligo 0-16. Who could believe it? Paddy Clarke’s records would confirm that it wasn’t since a Jimmy Mulroy-coached side beat Monaghan in Carrickmacross in the first half of the 1970s that a Louth side scored so much in a league tie.

True, in some recent years that kind of score has been conceded, but in a welcome change of fortune it’s on the plus side this time.

The final tally aside, the win – at Drogheda’s Gaelic Grounds - has Louth up with the Division Three leaders, and with just three matches remaining thoughts have turned to promotion, while relegation is there for others to grapple with. And to think

it’s all being done with Wayne Kierans in the sin-bin, the sideline out of bounds to the rookie manager.
When Declan Byrne is good he’s very good - and maybe when Jim McEneaney gets an extended break from the treatment room, or is given the recognition his talents deserves, he’ll find a permanent place in attack.
Byrne had a going day in the rout of hapless Sligo, claiming two excellent points early on and then finding himself in a goal-scoring position before being hauled to the ground inside the penalty zone. Sam Mulroy made the erring visitors pay the price, and with another young blade, Eoghan Duffy, having just hit the rigging, the game turned clearly in Louth’s way.

There’s a trip to Dr Cullen Park this Saturday evening, and it’s for sure there are many who will want to follow the team up – or down, if you like – to Carlow. After that there are games against Down and Westmeath. None of these will provide opposition as weak as struggling Sligo, but, growing in stature, Louth can look forward with confidence, supporter apprehension much less prevalent than as it was before the opening round match with Longford.

If Dundalk come out of this week’s two matches with six points it’s game on. First of them was last night against UCD at Oriel, the other away to Shamrock Rovers on Friday night.

However, Rovers – said to have the best midfield any League of Ireland team has assembled in recent years - were involved in a local derby last night, and if they won that and add three points at Tallaght, Dundalk would be at least seven points off the pace. Now that would be a situation which would really test Vinny Perth’s and his team’s mettle.

According to reports, the game at Ballybofey was good, but not Dundalk’s performance.
Ireland’s joust with Italy was there for anyone with a television to see, and it didn’t show the visitors in good light. Six down at the break, they struggled to a 26-16 win; but with a bonus point included, and England going down to a surprise defeat by Wales, the gap at the top of the table has been reduced.

However, the concluding part of the programme is more favourable to England, and what is probably exercising Joe Schmidt’s mind now is not a miraculous recovery, salvaging the Championship, rather, restoring confidence ahead of the World Cup.

From being solid second–favourites, Ireland have gone out in price and are not the assured side they were last year.