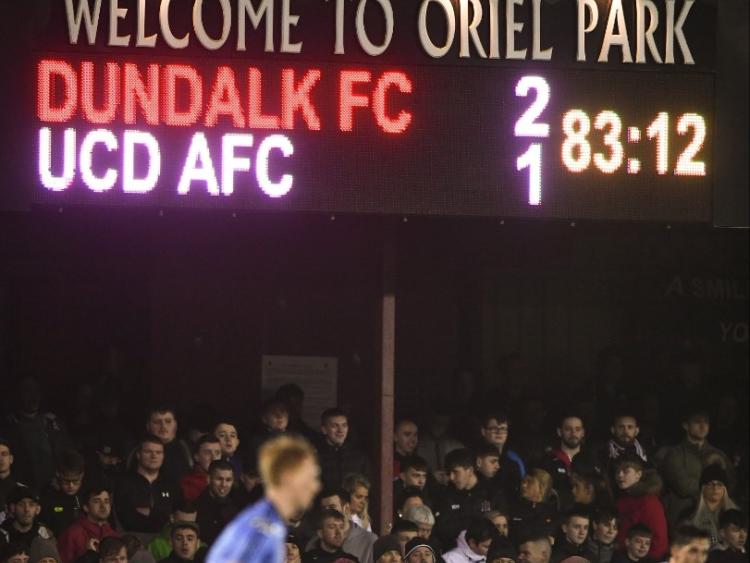 Seán Gannon says winning is embedded in Dundalk’s mentality, whether they are facing Real Madrid or Shamrock Rovers, as the reigning champions prepare to “take that momentum” gained from their first win of the season into Friday’s mouth-watering clash at Tallaght Stadium (8pm).

Gannon was part of the Rovers squad when they last won the Premier Division title in 2011, and some believe this year may present their best chance since then of collecting the trophy for an 18th time.

But the early-season standings turned dramatically on Monday night as Dundalk came from behind to beat UCD at Oriel Park while the Hoops’ flying start crashed with a Dublin Derby defeat by Bohemians at Dalymount Park.

That leaves Vinny Perth’s side just a single point behind their opponents going into this weekend, and Gannon insists they will go to win the game as they look to make a statement under their new management structure.

“100 percent,” he affirmed. “We go into every game wanting to win, it doesn’t matter who we’re playing, if it’s Real Madrid or anyone. Always the mentality in this dressing-room is to win the game, simple as that. We never feel inferior to any side.

“It’s obviously going to be a tough game in Tallaght, but we’re more than capable of winning the game and that’s the mentality that we are going there with.

“It’s always a great game. I’m sure there will be a big crowd there and we’re looking forward to going down and playing against them. We got a great win on Monday and hopefully we can take that momentum into Friday.”

The 27-year-old played a starring role in Dundalk’s recovery against the newly-promoted Students, and while he knows there remains room for improvement, he was delighted with his side’s second-half display.

“I think there are areas to improve, obviously, but the main thing was getting the three points,” he said. “UCD are a good side; they pass the ball well, they keep the ball. We went behind again but I thought we showed a great attitude and great character. When we came out in the second half, we were a totally different side and probably deserved to win the game in the end.”

Asked if he felt pressure going into the fixture, Seán added: “No, not at all. Why would we? There is no need to feel any sort of pressure. We’re professional players and it’s the third game of the season. There was no pressure at all.”

For the third game running, the Lilywhites trailed 1-0 at the break, only to battle back on each occasion to earn five points. And Gannon says there was no half-time panicking in their latest outing.

“Just keep going,” the right-back revealed, when asked what was said at the interval. “We created chances, again, in the first half. It was a bit of a sucker-punch on the break. We said just to keep playing, trust in the team and we knew our luck would turn.

“We’re battering the goal down at the moment – hitting posts, crossbars, ‘keepers pulling off worldies. But we just keep trust in ourselves, keep trust in what we’re doing. In the second half, we got the three points and that’s the main thing – three points on the board.”

Already, the Premier Division is looking very competitive this season, with all of the fancied teams dropping points just three games in. But Gannon says that was always going to be the case.

He concluded: “I could have told you that before the league even started. A lot of teams have signed quality players. A lot of quality players are after coming back to the league. It was always going to be hard to defend the league title, but we’re up for the challenge. We’re a very good side ourselves. The league trophy is sitting upstairs in the cabinet and we want to keep it there.”