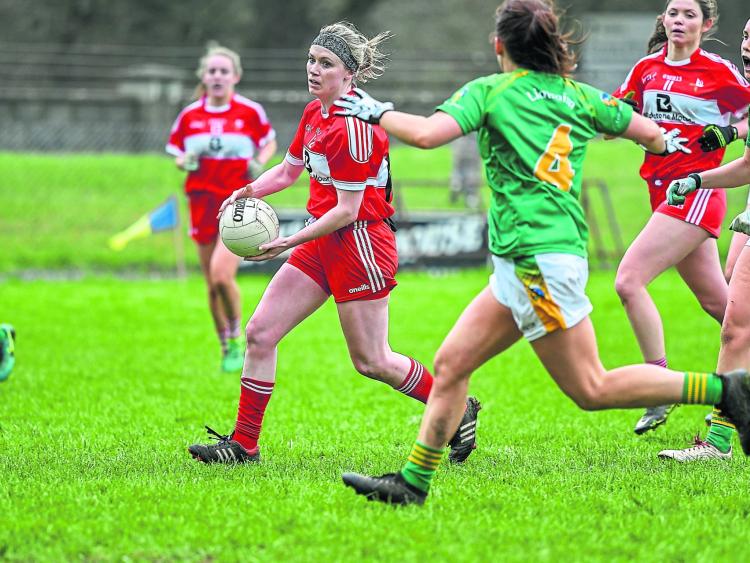 Louth overcame Leitrim on Sunday to claim the second victory of their Division 4 campaign.
Reds boss Darren Bishop was wary of the Connacht side's threat ahead of this clash, but his clinical Louth side were worthy of their victory.

Leitrim started encouragingly with Michelle Heslin, who was one of Leitrim’s top performers on the day, pointing just 25 seconds after the throw-in.

At the other end of the pitch Louth were finding it tough to get up to speed and the game was seven minutes old before they struck for their opening score with Kate Flood levelling matters from a free.

Shortly afterwards the Wee County gave the first indication of their calibre as an attacking force when Flood, Lauren Boyle and Jennifer McGuinness combined well to carve open the Leitrim defence but Leitrim goalkeeper Michelle Guckian was alive to the danger and rushed from her line to snuff out the threat to her goal.

The game was 14 minutes old before the next score arrived with Lauren Boyle on target following an excellent run to give Louth the lead for the first time.

Leitrim’s response was immediate as Bronagh O’Rourke was picked out with a dangerous delivery and the St Joseph’s corner-forward turned quickly before slotting her shot over the bar.

Moments later Leitrim were back in front when O’Rourke converted a free to give Leitrim a slender advantage.
Lauren Boyle proved to be one of Louth’s main threats in attack and she pounced to level matters in the19th minute after being found by Susan Byrne.

Leitrim’s loose play was punished six minutes before the interval when a free deep inside their own half was badly misplaced resulting in Susan Byrne being allowed an easy shot at goal which she duly slotted over the bar.
Leitrim looked to be tiring as the half neared its end and Louth extended their lead to two points when Byrne scored her second of the half.

To their credit Leitrim responded well and some quick, incisive passing, which wasn’t seen often enough resulted in Dearbhaile Beirne and Laura O’Dowd cutting through the Louth defence before O’Dowd pointed to leave the minimum between the sides.
Lauren Boyle and Bronagh O’Rourke (free) exchanged points as the half edged towards its conclusion but there was to be a hammer blow for Leitrim with the final action of the half as Louth struck for the game’s opening goal.

Kate Flood and Jennifer McGuinness linked up brilliantly, although the Leitrim defence will be disappointed with how easily they were torn apart and when the ball was returned to McGuinness she finished from close range to give her side a healthy 1-6 to 0-5 interval lead.

Just three minutes after the restart Lauren Boyle converted a free to further extend Louth’s lead.
Leitrim hit back with a Bronagh O’Rourke free but scores were proving to be hard earned in what was at time’s a bruising encounter.

Leitrim’s hopes were given a significant boost when Louth’s Lauren Boyle was shown a yellow card following a heavy collision with Leitrim goalkeeper Michelle Guckian but even with the numerical advantage Leitrim still found it difficult to break down the Louth defence.

The red shirts defended in huge numbers and counter-attacked with pace and conviction with Ciara Woods and Susan Byrne both pointing to open up a six point lead for Louth.

Bronagh O’Rourke replied with a Leitrim point from another free and as the 10 minute sin-bin period was about to elapse Leitrim were handed a lifeline when they found the Louth goal.

Some clever play from Laura O’Dowd released Dearbhaile Beirne through on goal but her shot was well saved by Louth goalkeeper Una Pearson. However, Michelle Heslin was the quickest to react and she was on hand to dispatch the rebound to the goal.

Unfortunately Leitrim were unable to build on that score as Louth looked the more composed and organised side during the closing stages.

Victory was all but secured with four minutes remaining when Niamh Rice found herself on the end of a defence splitting pass shortly after her introduction and she showed great composure to dispatch her shot just inside Michelle Guckian’s post. A late yellow card for Laura O’Dowd had no bearing on the final outcome but illustrated the frustration of the Leitrim team and the game finished with pointed frees from Bronagh O’Rourke and Kate Flood as Louth ran out deserved winners.