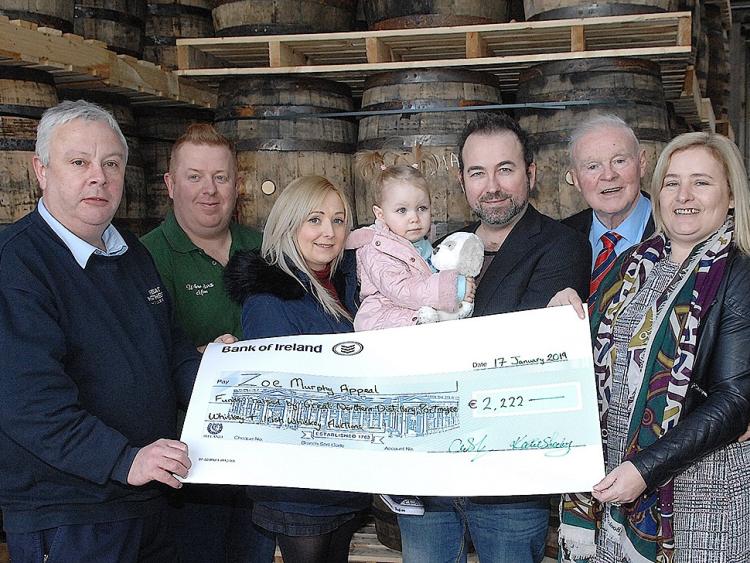 The final total raised at auction was generously matched by the Great Northern Distillery who donated the three exclusive, limited edition bottles into December’s online auction. Irish Whiskey Auctions also donated the commission sales to ensure the maximum amount was raised for Zoe and her family – bringing the final total donated to the local charity to €4,222.

Anthony Sheehy, Founder and Director of Irish Whiskey Auctions comments: “We are delighted and feel privileged to be involved in such a fantastic cause and hope by facilitating the sale of these unique bottles of Irish whiskey that in some way we are helping to make life better for Zoe and by extension her whole family.

“Our users really engaged all aspects of this fantastic auction and helped spread the word on all Irish Whiskey Auctions social platforms which ultimately helped us raise this sum for the Zoe Murphy Appeal.

“It was particularly exciting watching the bidding during the closing moments of the auction... There were a lot of bidders who knew exactly how special these bottles are and we were delighted at the final bid of €1850.”

The three ‘First Born’ bottles that went ‘under the hammer’ mark the coming of age of the Great Northern Distillery, Dundalk and were released to mark the launch of its first spirit. Distilled in 2015, the Single Grain, Tripled Distilled Malt and Blended Irish Whiskey bottles were part of the exclusive first casks and are individually numbered and hand-signed by John Teeling, Chairman and Founder of Great Northern distillery. The winning bid came from John McKenna and his business partner Bevin Tumulty both from Northern Ireland.

Anthony continues: “Alongside the three bottles of ‘First Born’ we also had a limited-edition bottle of Portmagee 9 donated into the auction – with proceeds going to the Zoe Murphy appeal - which attracted almost 30 bids and sold for €170 to Seamus O’Dowdens an award-winning publican from Vermont, USA. The bottle was part of a limited collection and thought to be the only nine-year old Whiskey in Ireland – so it was very special to have this as part of December’s lot.”

Two-year-old Zoe was born with a PVL brain injury causing quadriplegic Cerebral Palsy. She is now a candidate for surgery in the USA — at a cost of €100,000 — and the people of Dundalk are supporting the Murphy family in their efforts to raise €100,000 for the life-changing surgery, which will dramatically improve Zoe’s chance of a better life.

Irish Whiskey Auctions runs online every month and with hundreds of notable bottles in the auction there really is something for everyone.