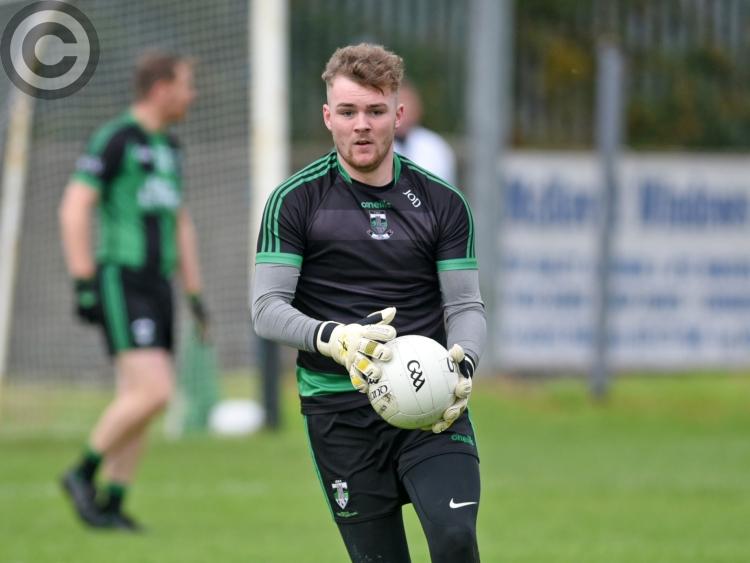 'Keeper Fergal Sheeky has been in top form this year for the Dundalk outfit. PICTURE: Ciaran Culligan

The lot of a goalkeeper. Who’d be one, eh? Both a hero and a villain - sometimes in the very same passage of play.

But, there’s also those extended periods of time when you’re standing idle, watching as the game unfolds what seems like miles away from you. Keeping the head and remaining focused becomes the name of the game during those boot-gazing moments.

Dundalk Young Irelands keeper Fergal Sheeky knows about all of the above, though thankfully more of the latter - certainly in recent times anyway. The club have gone 19 games in a row without conceding a goal. It’s an enviable record for any defensive unit and any goalkeeper too.

Sheekey has been rewarded with a county call up this year, something he does not take for granted.

“It was a great lift when Wayne (Kierans, new Louth boss) got onto me about being a part of the county panel this year, which is a great honor to play for my county and an opportunity I’m going to grab with both hands,” he says.

But back to Young Irelands, who face Kilkenny side Tullogher Rosbercon next weekend in the semi final of the Leinster Junior Club Championship, surely he's taking a lot of the credit for not letting in a single goal in 19 matches? He demurs.

“I think I have done pretty well throughout the season, then again I didn’t have much to do! I wouldn’t be one to talk about my own performance in a game, because it’s the boys in front of me that are making my job very easy.

“The record speaks for itself - we have gone 19 games in a row without conceding a goal - so I don’t think it would be fair to pick out one man, I think as a group we have done brilliantly.”

While semi finals are there to be won - with a Leinster final the prize should the Seatown side overcome Tullogher in New Ross - the club’s aspirations go somewhat higher, reveals Sheekey.

“We said at the start of the year our aim was to win an All-Ireland and I know that's optimistic, but Adrian (O'Donoghue, manager) really drilled that into us, so it’s kind of not a shock to us we are still playing this late into the year. We were expecting it, so we were all on the same wave length from the get go.”

But what of Sunday's opposition?

"To be honest, we don’t know a whole pile about Tullogher Rosbercon,” Sheekey admits. “Adrian wouldn’t be one to talk about the opposition too much because he would rather focus on our own game and how we play and he’s confident we can beat anyone on our day and that creates a great buzz within the group; the fact he believes in us that much.

“I’m sure there not a bad outfit, if they can reach a Leinster semi-final.”

Playing so late in the year presents its own set of challenges, adapting a team’s game sometimes needs to be done to overcome the conditions. However, Sheekey says that their style suits winter football.

“Yeah it can be difficult, especially playing all year, it does take its toll with injuries, but I suppose that’s just part of the game.

“We try not to get bogged down too much on the slippery conditions because it’s the same for the other team.

“We like to work the ball throw the hands; that’s what our game is about, so again we try just keep things easy and not let the conditions come into factor.”

It’s late November 2018 and Young Irelands are still kicking a ball in anger. It’d be an understatement to say it’s a bit of a turn around from the previous year. Sheekey smiles.

“Obviously we had a disaster of a year last year, getting relegated in both the league and championship, so it was a transition period for the club. We needed to get a few young lads in and try mix a bit of youth with experienced heads and I think Adrian (O'Donoghue, manager) has really found a great balance within the squad this year.”

Certain names, in this regard, roll off Sheekey’s tongue.

“Cian O'Donaghue, Peter McStravick, Oisin McCabe coming in have really made a name for themselves. All we needed was a few wins under our belt and kick on from there and that’s exactly what we have done.

“As I said, the buzz around the club is unbelievable and the confidence that has given us as a group of players really has been second to none.”