Some stirring times from the Dundalk Democrat's early days 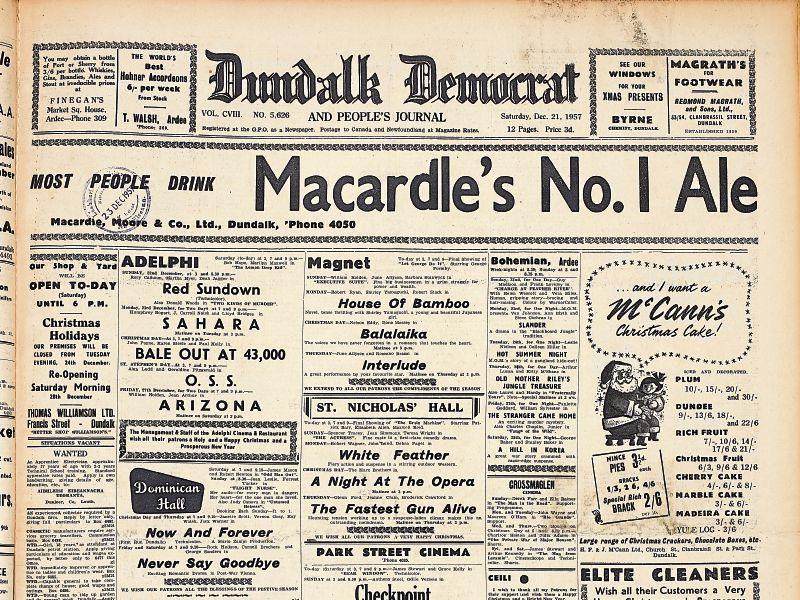 An old edition of the Dundalk democrat

The story about the building of the old Workhouse on Ballybarrack Hill, which I wrote about briefly last week, has an interesting connection with the early days of the Dundalk Democrat. The Editor Joseph Carton (or Cartan as his name was sometimes spelled) spent five weeks in old jail in 1852 as a result of a libel action taken against him by owner of the lands on which the institution was built.

The 'Book of Dundalk', from which I quoted last week, states that --- 'There was a difference of opinion as to whether the Workhouse should be built on Ballybarrack Hill or on Gallows Hill, later the site of the Jail (at the Crescent). The former site was offered free by Lord Clermont and this tipped the scale in its favour. The Government advanced £9,000 towards the cost of the building'.

The statement is incorrect because, firstly the owner of the land at Rath, where the Workhouse was built, Matthew Fortescue, was not created the First Baron Clermont until 1852 and secondly he did not give it away. This is shown by a copy of the Deed of Transfer of these 8 acres, 1 rood and 17 perches at Rath, which has been kindly forwarded to me by Noel Sharkey, which states that Fortescue was paid £322-13s sterling for these lands in July 1840.

This might not seem a lot of money but when one considers that the pound sterling in 1840 was worth nearly £100 in today's money, I reckon that the amount paid was worth nearly €40,000. Incidentally, I note that the Farmers' Journal states that the average value of an acre of agricultural land in Ireland in 2018 is around €9000. So, Matthew Fortescue did not get such a bad price for the site, considering that much of it could not have been considered arable land in 1840. The cost of modern house building sites are much higher, of course, is much higher but that would not have been an option in the early nineteenth century.

The court case involving the Democrat had nothing to do with the building of the Workhouse but arose as a result of of a parliamentary by-election in which Lord Clermont's younger brother, Chichester Fortescue, was elected to represent County Louth when he defeated a representative of the Home Rule Repeal Movement. At the time Joseph Cartan was an ardent Repealer and against the Landlord gentry who ruled the County. He wrote something uncomplimentary in his newspaper about Lord Clermont's behaviour during the by-election. Fortescue responded by taking a libel action which resulted in a decree for £250 against Cartan. On foot of the decree, Lord Clermont had the equipment of the office at 98, Clanbrassil Street seized and sold. It was bought in for the proprietor but this, apparently, did not cover the full amount of the decree and Cartan was imprisoned in the old Jail which stood where the Town Hall is today.

Cartan was finally released on Christmas Eve 1852 when his friends liquidated the debt and the paper continued to be printed on a weekly basis over the five weeks during which he was incarcerated. If he had not got this support the Democrat would not have continued to exist for another 165 years.

That was not the only incident which enlivened this controversial by-election as it was also the cause of a challenge to a pistol duel. Owen Joe Carragher of Cardistown, Ardee, a supporter of the Repeal candidate, issued the challenger to Phil Callan, a barrister from Ardee, a supporter of the Fortestcues. The duel, however, never took place, apparently because the formal challenge did not reach Callan. Callan was later to switch sides and was elected a Home Rule M.P. in 1868.

So, you can see that 1852, was an exciting time in Dundalk because it was the occasion of the last public execution in Dundalk when two men were hung outside the old Jail in Crowe Street on July 31. This event was reported in the Dundalk Democrat which had only commenced publication less than three years earlier in October 1949. This story had a further twist when, two days after the executions, a prisoner attempted to hang himself in the Jail. He had been arrested on suspicion of conspiracy in relation to the trial. Six weeks later the same man cut his throat and flung himself from a window in the police barracks opposite the Jail.

This same building was taken over by a young printer William Tempest from Rostrevor who had been an apprentice in Newry in 1859. He established 'Tempest's Almanac', later to become 'Tempest's Annual' which was to become the source of much information about local history of Dundalk for over century. It became the offices of the Dundalk Democrat for over a decade at the beginning of the present century.