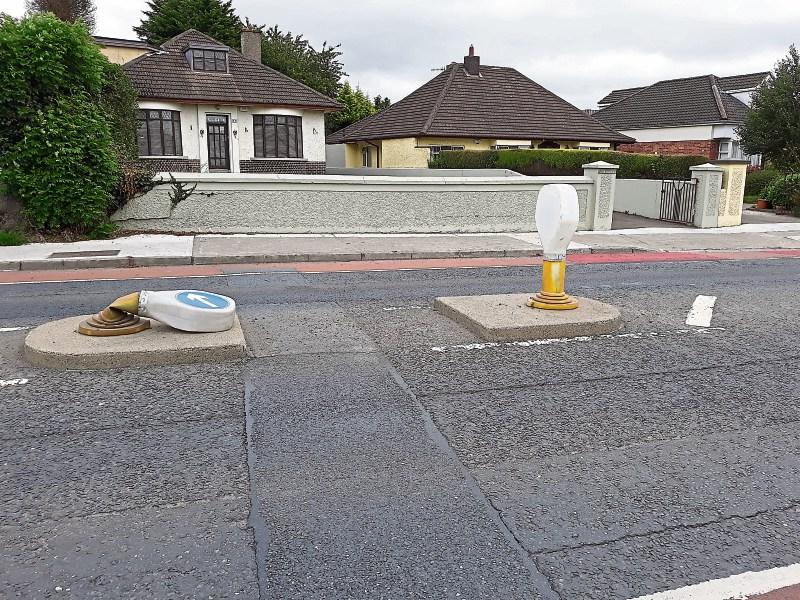 The Dublin Road in Dundalk

For the past six months mechanical diggers, pipe laying machines and squads of workers have been busy on the Dublin Road in Dundalk.

The street resembles a patchwork quilt of repairs and it’s been inconvenient for residents and motorists who often face long delays during the work to lay new water pipes and fibre optic cables to improve the infrastructure in Dundalk. It seems the finishing touches will be put on bike lanes on the Dublin Roads to complete the job in the coming days.

It’s a busy stretch of road with thousands of motorists, pedestrians and cyclists using the main route into town. Though it is the main route into our proud town the Dublin Road is completely neglected and ignored in terms of its appearance. After months of repairs, the street resembles a patchwork quilt, a hotch-potch of ugly scars. No proper white line markings, lack of speed warning signs and traffic islands with missing plastic bollards that are a serious danger to drivers at night.

The route is used every day by thousands of students at DKIT on foot and on bicycles but no consideration is given to vulnerable road users including schoolchildren.

Louth County Council , the Gardai and the Road Safety Authority have health and safety obligations but local residents, including the elderly and children are not being protected.

The 50 kmh speed limit is generally ignored and the road is used like a motorway instead of a busy urban access route. It’s time to install digital speed signs to warn drivers that they are exceeding the speed limit and mark roads with new white paint.

Surely there are committed councillors who can devise a road safety scheme and press Louth County Council to make the Dublin Road a model for the rest of the town. It could be replicated on busy roads such as Castletown Road, the Avenue Road and St.Alphonsus Road.

Too often motorists drive with a sense of entitlement ignoring speed limits and racing to a shopping centre to buy groceries as if their life depended on it. Selfish Mr. Toad is alive and well in all of us we just need to be reminded that a child or pedestrian could be trying to cross the road and to slow down.

It is high time that Dundalk drivers are advised to slow down with new warning signs and clear road markings that pedestrians and cyclists must come first. Or what about putting some Garda cyclists on duty on the street when DKIT students return in September?

Places like Carlingford and Castleblaney have put vulnerable road users first with clear speed signs, digital warnings and white lines. Why can’t similar measures be taken in Dundalk? There is a warning sign near Banbridge , County Down that implores motorist to” Kill Speed Not our Children”. Why not have that signage here?

As we head into the autumn, school days and dark evenings the danger to road users, young and old increases. With repairs being completed on the Dublin Road Louth County Council officials now have an opportunity to make the environment safer for cyclists , pedestrians and motorists.

It is frustrating to live in a vibrant town with so much to be proud of and see what needs to be done to make it safer.

The late Taoiseach Albert Reynolds who introduced bus lanes in Dublin said he became so fed up with the lack of progress on his plan he threatened to use a brush and paint to mark the white lines himself. It’s a bit like that in Dundalk.

There is much talk about road safety, but sadly there is no practical effort by any local authority to keep citizens safe.