Alf Dwyer was a 'towering influence for good' in Dundalk 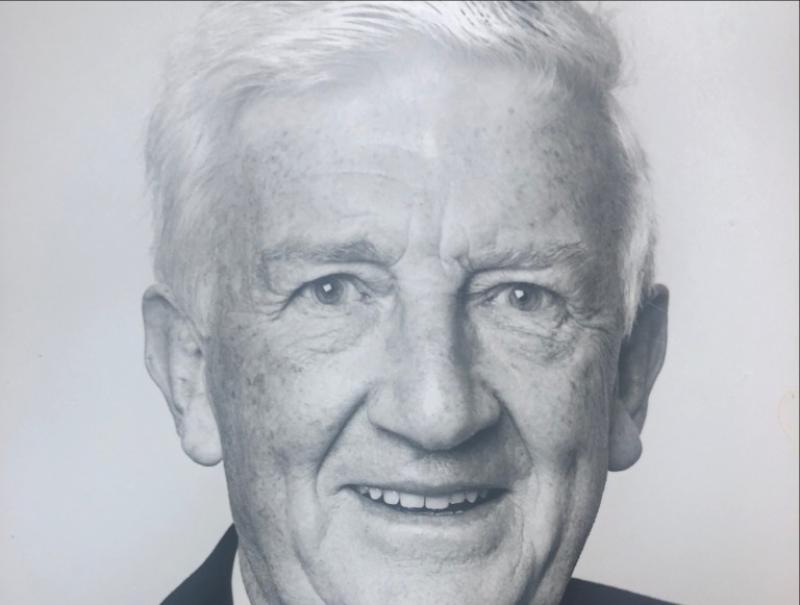 A towering influence for good was Alf Dwyer. He definitely left his adopted home of Dundalk a much better place from his varied involvement and interests in various spheres of life from health to the theatre to business.

The Cork man’s legacy from almost 60 years living and working here and his voluntary input and tireless work for so many causes and organizations spanning also the social and sporting life of the town produced so many tangible outcomes, successful and enjoyable and that endure.

Foremost among those achievements was the establishment of the Birch’s Centre that has made and continues to make life so more manageable for those whose loved ones have the Alzheimer disease.

He chaired the group that raised the capital to build the Alzheimers Day Centre in the old hospital grounds.

This was after he gave over three years to 'Target 250', a fund raising campaign that he co-chaired with Doctor Tom O'Callaghan to raise £250,000 for badly needed equipment in the Louth County Hospital.

An apt title then given to Alf was "the town's go to man.” Any community project, any worthy fund raising campaign, any event that needed to capture the public attention, then Alf was the man to provide the leadership, zest and enterprise.

His desire to uphold the good name of Dundalk, sullied as a result of the Northern Troubles and particularly the Omagh bombing in 1998, led Alf to take a leading role in a small ad hoc committee that within the space of a few days organised a rally that saw 15,000 people from the town and locality assemble at the Market Square to register their abhorrence at the violence in the North, with pictures from the rally screened by SKY throughout the world.

From a staunch Republican background, he was born in Cork City in August, 1931, the second eldest of six children, four boys, two girls to Harry and Mary Dwyer.

His father was from Cork City, his mother from Beal na mBlath near Bandon. Republicans by conviction both had taken part in the Civil War on the side of Michael Collins.

After his primary education at Strawberry Hill NS, he attended the renowned North Monastery Secondary School, run by the Christian Brothers, and was forever grateful to the Brothers for nurturing his love of the Irish language that remained with him throughout his life.

In 1948 he joined the Post Office, and continued to study at home to complete his Leaving Certificate the following year.

Later he joined the Revenue Commissioners working in the Cork Office until in April, 1960, he was seconded to Dundalk to help with the introduction of the new Pay As You Go (PAYE) system which was to take effect for all salaried workers from October of that year.

His secondment was to last for six months, but extended to the remainder of his life, with Dundalk becoming, as he said himself on frequent occasions, "the town that gave me everything, a great family, wonderful friends, a good business, and a life about which I have no regrets.”

Work
Alf remained working in the Tax Office in Dundalk, first from Douglas Place and later in the newly built offices in Earl Street.

He was one of the top officials with the Revenue Commissioners in town until in 1981 he took the bold step to establish his own tax consultancy business, first in the Backhouse Centre and later in Stapleton Place.

Over the following 20 years he became an invaluable source of counsel not just on taxation, but on business opportunities, to a wide variety of clients, and even, as Very Rev. Paul Montague, Administrator, of Holy Redeemer parish, recalled during his very eloquent eulogy at his Requiem Mass, Alf advised priests in the Archdiocese, and the Archdiocese itself, on matters relating to taxation and pensions.

Alf sold his business to his auditors, Connolly, Fee & McGailey in 1999, retired the following year but continued to play a very active part in his local parish, where he was a reader and collector, and in a wide number of community activities in the town.

On his arrival in Dundalk in 1960 the town was slowly emerging from the stagnation that existed since the foundation of the state. Improving incomes motivated townspeople to look for an outlet to celebrate local achievements and promote local endeavour in the commercial, sporting and artistic fields.

The progressive Church Street Traders, under the inspiring leadership of Enda McGuill had suggested staging a festival in town, and to get their idea off the ground they enlisted the help of Alf.

He brought with him the knowledge of festivals in which he was involved in Cork, and eventually under the guise of Dundalk Chamber of Commerce, Dundalk's first festival was born.

It was named the 'Grain and Grape' Festival, first staged in 1966, and was an immediate hit, with street events, exhibitions, fireworks, and a host of events over the week.

Maytime Festival
Later named the 'Maytime Festival' it endured for four decades, with Alf its President in 1970, and helped steer the festival towards its central theme, of international drama, which became the platform on which the success of the Festival was built.

He was co-founder of the Dundalk Film Society, an adjudicator with Muintir na Tire, and produced a pantomime in the old Adelphi Cinema in 1968 in which he played the dame in 'Babes in the Woods'.

Although his direct sporting involvement was confined to golf, Alf's endeavours for Dundalk FC in the marvellously successful era of Jim McLaughlin increased advertising revenue at the ground from £700 to £7,000.

He also at the behest of Fyffes and his great friend, Paddy McNamee he established the Backhouse Theatre in town that attracted well-known national personalities.

He joined Dundalk Chamber of Commerce in 1989, and was President in 1991, when, recognising the need to improve Dundalk's image and reputation, he invited British Ambassador, David Blaitherwick to town to meet townspeople.

His love of drama, music and culture was fostered in his native Cork by the renowned Father Christy O'Flynn, a titan of his time, and one of the most remarkable men of his generation.

That affinity was born when Alf was introduced by a casual acquaintance to "The Loft", a two roomed citadel of Cork's cultural activities located over a sweet factory.

Then just 19, Alf was captivated by the infectious enthusiasm that Father O'Flynn brought to his love of Irish music and song and it was no surprise that Sean O'Riada was a regular visitor to "The Loft".

Plays
Sunday mornings in "The Loft" where particularly special for Alf, as local and national figures in the artistic milieu called regularly. Exposed to Father O'Flynn's other great love, the works of Shakespeare, Alf was a willing participant in many of the plays he produced such as "Merchant of Venice", 'King Lear' and 'Macbeth'.

Alf also got involved with other groups in Cork, including the Christmas panto.

When he left the Cork scene that he loved so well he felt that his absence would only be temporary, but as his stay was extended, Alf was enticed to find an outlet for his talents, and in Tom Tynan, the legendary producer of the renowned Genesian Players in Dundalk he found a soul mate.

Alf's stage debut in Dundalk was however with the Dundalk Dramatic Club, playing Curly in "The Country Boy", produced by Kitty McDermott, but soon his allegiance with Tom Tynan and the Genesians produced a rich dividend for Dundalk audiences and indeed audiences throughout the country.

The plays of John B. Keane were coming into vogue, and in the role befitting his talents that of, Danger Molloy in "Many Young Many of Twenty", Alf stole the show winning acclaim and awards at drama festivals held throughout the country.

Alf's finest performance, even though he did not admit it himself, was playing "The Bird" in another of Keane's best known plays, "The Field", which drew capacity audiences over extended runs in town.

Irish
That stage experience garnered in his early life, and his love of the Irish language and music became a major asset in his adopted town, for throughout his life Alf rarely turned away a request from a charitable or voluntary body to act as compere at a guest tea, concert, fund raising event.

He was the consummate professional, never going before an audience unprepared, or immaculately attired, and the hallmark of this expertise was the ease by which he himself appeared, the eloquence and humour that he conveyed to his audience.

The pinnacle of the concerts he compered was the Saint Patrick's Day concert in the Royal Albert Hall in London in 1978 with a capacity audience of 6,000.

He will therefore be remembered with great affection, and gratitude by the many organisations to which he gave his services so freely, for it was a true sense of community, and a desire to foster the greater good that was his motivation.

He died in the loving care and dedication of the staff at the Louth County Hospital on July 21 last and after reposing at his home in Mount Avenue his remains was taken to Church of the Holy Redeemer for Requiem Mass celebrated by Father Montague.