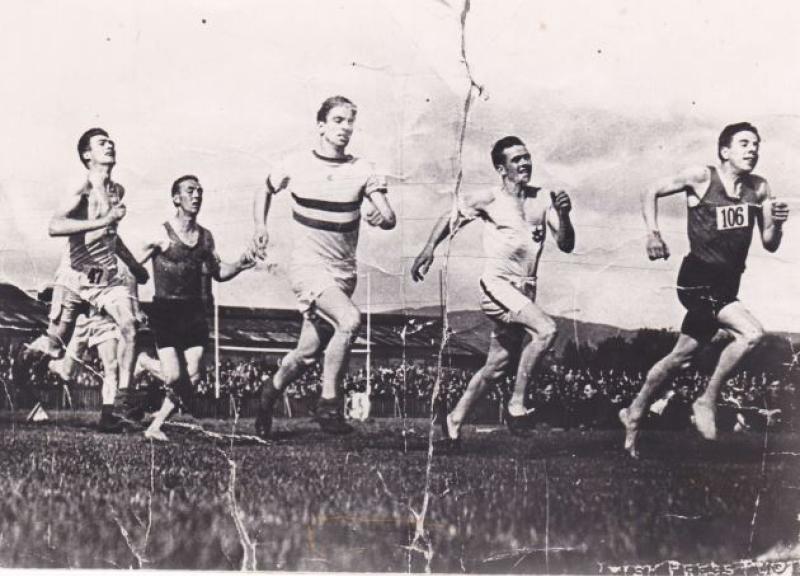 During the past week a man from Kilkerly called Bernard Mulholland was kind enough to call to my door with a photograph which he said might be of interest to me and my readers!

Bernard tells me that it was passed on to him by a member of the local G.A.A. club. A handwritten note simply reads – 'Dundalk athlete beats Paddy White and Brendan 0'Dowda over 440 yds in the Gaelic Grounds, Dundalk' and is there print in the bottom right-hand corner which states 'Irish Press Photo'.

Bernard says that photo came from old pictures that had been kept by a member of the Emmetts and he says that he was told that Brendan O'Dowda was the tall runner in the centre photograph.

Looking at it closely, however, I am pretty sure that Brendan is the one second from the right with a star on his vest and that the tall man was Paddy White from Kilcurry. The face of the lad winning the race looks familiar but I cannot put a name on him!

Many of my older readers will know that Brendan O'Dowda was one of the most iconic tenors who grew up in Dundalk and attained international fame on radio and in the early days of television, some even comparing him with the great John McCormack.

Brendan was born in one of the Coastguards' Houses at Soldiers Point in 1925 and his relations are still well known around Dundalk. His elder brother Frank was a very good Gaelic footballer whom, I am told, played for Louth in a Minor All-Ireland Football Final.

His sister Maureen was married to Peter McManus who ran a pub in Seatown and she was an excellent artist; they spent their latter years in the house beside the Coast Guards' now named 'Watergate'.

Charlie McCarthy, who himself lives in one of the Coast Guards' Houses, tells me that the O'Dowda family had moved into one of those houses after the Coast Guards vacated them on the establishment of the State in 1922.

He thinks that they later moved to a house on the Castletown Road where Brendan was educated at the de la Salle secondary school.

He had a fine voice from childhood and sang in St. Joseph's Redemptorist's Choir from which he attracted the attention of a leading vocal trainer, was offered a career in opera and moved to England to further that career.

He moved into pop singing and became an idol in the fifties, with hits such as 'The West Clare Railway'. He was involved in forming a famous group called the Four Rambles that included Val Donegan.

He also achieved fame singing on BBC radio but his greatest claim to fame was that he popularised the music of Percy French, especially among Irish exiles. One of the nicest stories about Brendan, which I can personally verify to be true, is that, after he had achieved great international fame, he would always return to St. Joseph's Church at Christmas time to sing at Midnight Mass as a 'thank you' to the Rev. Edward Jones, C.Ss.R., himself a Dundalk man from Castle Road, who had taught him to sing.

The church was always packed for these performances. He also voiced a number of Percy French songs in movies, including 'Darby O'Gill and the Little People' which starred Sean Connery.

Brendan died at his home in Fareham in Hampshire, England in 2002 and is buried at Lucan in Co. Dublin.

Brendan seems to have been a good athlete and I wonder if any reader can identify the club of which he was a member. I believe that Paddy White would have been a member of the Dowdallshill football and athletics club.

I believe that the photograph must have been taken during the World War 1 1 Emergency period when sporting events were very popular in the Town and district.

The finish must have been in front of the old stand and you will note the large crowd all around the stadium.

I remember that the cycle races were very exciting, with large bunches of riders jostling each other to get ahead as they raced around the circuit of the ground.

A friend of mine tells me that the race bikes of those days usually had a 'fixed wheel' on the chain drive and had no hand brakes. You braked by pressing back on the pedals, which could result in a crack on the ankles if you were not nimble!

You will note that the inscription says that it was a 440 yds race, which was a middle-distance race of a quarter of a mile. That was before the days of races being run over meter distances.

I was not a great athlete myself but I did win one 220 yards race at the school sports day.

You will note also that the runners are wearing light, slip-over, footwear which was popular for sprint runners in those days and good ones were very costly.

The track was ‘close cut’ grass, there were few cinder tracks in the country in those days and no artificial surfaces, a track that could be very slippery on a wet day!