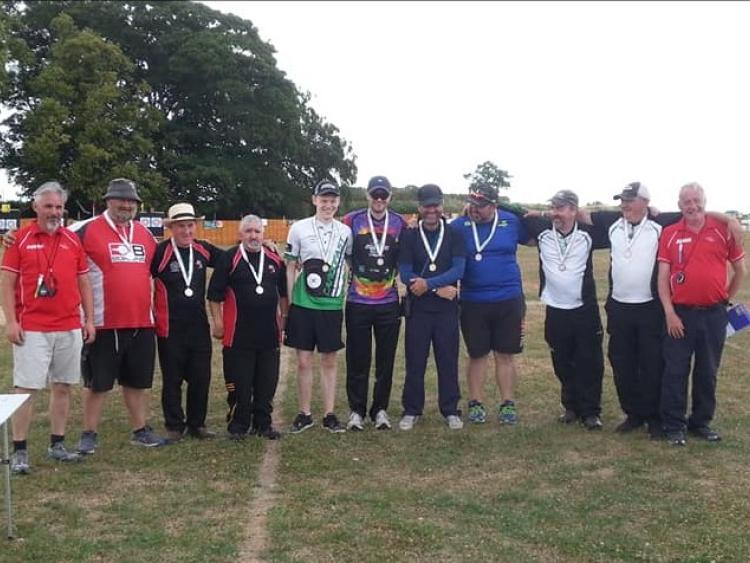 The day started under bright sunshine, very little breeze and a ground that was so hard, arrows that missed the target sent puffs of dust in the air.  It should be the perfect day to obtain high scores.

While the majority of CuChulainn Archers shot well in the early rounds of qualification, for example Michelle Brohan who scored a new PB, one Archer had several bad rounds due to equipment failure.  Ann Marie Murray struggled with numerous failures, but with great help from Coach Eamonn Rogers and several other archers, parts were repaired, arrows collected and calmness led to qualification.

The mixed Recurve team consisted of - Michelle Brohan and Brandon Dollard who came in a close 4th place.  Two mixed teams in the compound section saw Eamonn Rogers and Deirdre Rogers pair up against team mates John Keenan and Ann Marie Murray.  After an exceptionally close fight, John K and Smiler (Ann Marie) beat the opposition for 3rd place medals.  It's often difficult to come up against your own club mates, it's one of the different aspects of Archery to other sports.

Since then Eamonn Rogers has once again crossed Europe by car to attend a Major World Event, more on that next week.

CuChulainn Archers are based in Ardee, you can contact the secretary on 042 935 2380 in the evenings.  New beginners courses are always starting, for ages 8 to 88.