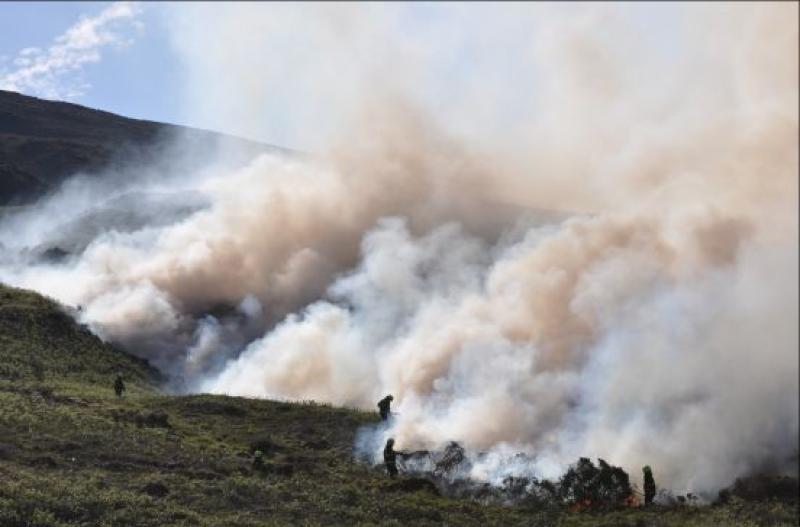 Heading for home one afternoon during the dry spell recently I noticed a plume of smoke rising from behind Annaverna Mountain in the Cooley Hills and thought ‘That can't be a good thing’!

Sure enough, when I reached home there were reports of dangerous wild fires raging on the Omeath side of the mountains and another among the small hills around Forkhill.

These fires were sending thick smoke billowing across the M1 motorway and causing danger for traffic using it.

All this was serious enough but it seems that local firefighters got the outbreak under control quickly enough to prevent any serious damage or injuries. Now I can recall a time when the warning ‘Fire on the mountain!’ was fairly regular event when the undergrowth on the mountains of the Cooley Peninsula gets very dry and combustable.

I remember well, when you could see more of the mountains from my home because many housing estates had not yet been built, seeing a red line creeping the face of the Cooley Mountains and, farther away, on Slieve Foy. To me, as a child, it seemed like two great armies advancing to meet each other and, as it got darker, the whole sky to the north of the Town would be aglow with a red mist that made it seem that these mysterious armies had met in battle.

At those times I could well imagine how the ancient stories of the armies of Maeve and Cúchulainn meeting in a great conflict in the area had been developed in the minds of local people!

Which brings me to the subject of the name of the highest point in County Louth, Slieve Foy which overlooks Carlingford town.

When I was growing up I had always thought that the Irish name for it was 'Sliabh Fuide'.

I had been told this meant 'Blazing or Angry Mountain' because it had been the sight of an ancient volcano which had erupted and its lava flowed down to block the mouth of Carlingford Lough and create the deep lake that exists beside it.

Now, this story was clearly geologically incorrect because researches had show that the Carlingford Mountains were created by a great land upheaval which also brought up the mountians of County Down and that the Lough had been cut out by a glacier during the Ice Age of a more recent era!

But that does not really explain the ancient name and the late Peter Woods, who was State Solicitor for County Louth for many years, said that he believed that it should be read as 'Sliabh Buí' or 'Yellow Mountain' because of the flowers that bloom on the gorse growing on its sides during the summer months.

The modern derivation of the name of the highest local mountain is given in Wikipedia 'Sliabh Feá' which is said to mean 'The Mountain of the Woods'. I find this explanation hard to accept because as far as I know there was never any great forest, either on Slieve Foy itself or back towards Ballymascanlon.

There is a new forest growing on parts of these slopes, back towards the Valley of Ravensdale, but these evergreen trees were not planted until after the foundation of the State in 1922 and Peter Woods' version of the name could be just as valid.

I wonder, however, could the name have could from those fires of autumn which were deliberately started by the sheep farmers to prevent them getting out of control during the dry spells be just as valid as any other explanation?

Readers may have their own views of the old names in the area and these probably vary greatly but the point is that that I believe that these old names can give an insight into a way of life that has passed!

I am sure the Editor would be pleased to get your views on this subject!