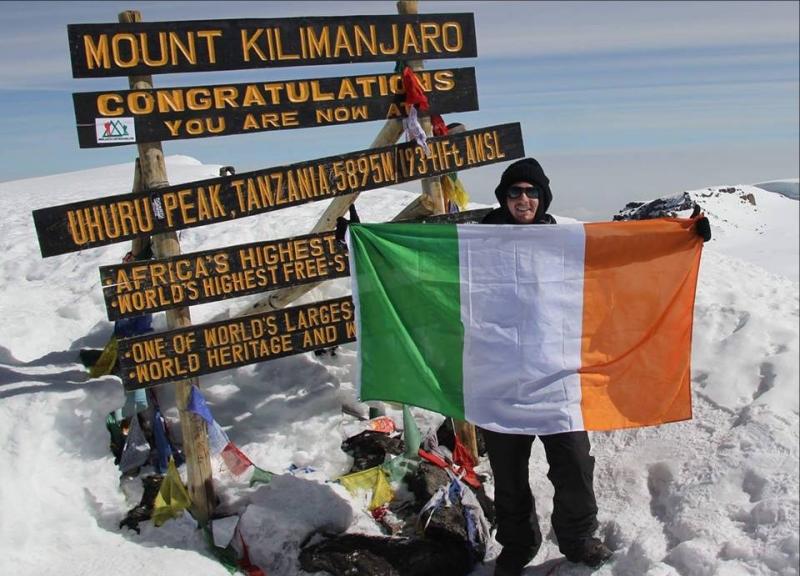 On the face of it Ryan Doherty doesn’t appear too fazed by it all. But, as he readily admits, the sheer scale of his achievement has yet to fully sink in.

As the 24-year-old Ravensdale man speaks, you’d struggle to guess that he was very recently involved in a perilous climb to the summit of the highest free-standing mountain in the world - Mount Kilimanjaro, which, among other ordeals, involved his climbing partner having to be rescued off the side of the mountain, while also having to battle through excruciating sun and windburn, and energy-sapping oxygen deprivation.

Yet, on Monday June 25th at about 9am - the sixth day of his ascent up the mountain - Ryan finally reached the top.

“When I got to Uhuru Peak that’s when the tears started”, recalls Ryan now, just over a week later, from the comfort of his home. “It was just a pure feeling of euphoria. I was just so happy I made it.”

However, as he reflects now on those crucial hours leading up to that defining moment, Ryan was in a much grimmer place - emotionally and physically, with serious doubts starting to creep into his mind.

“The hardest point was summit night,” he remembers. “I went to bed at 6.30pm and woke at 2am and left for the summit - this was after a full day of climbing. I was running on pure fumes before I reached Stella Point (the first summit - 5685m ).

“About 30 minutes off Stella Point I was having a mental battle with myself to turn back because my body became limp. I didn’t have the energy to even hold myself up. I was using my walking poles to support myself. 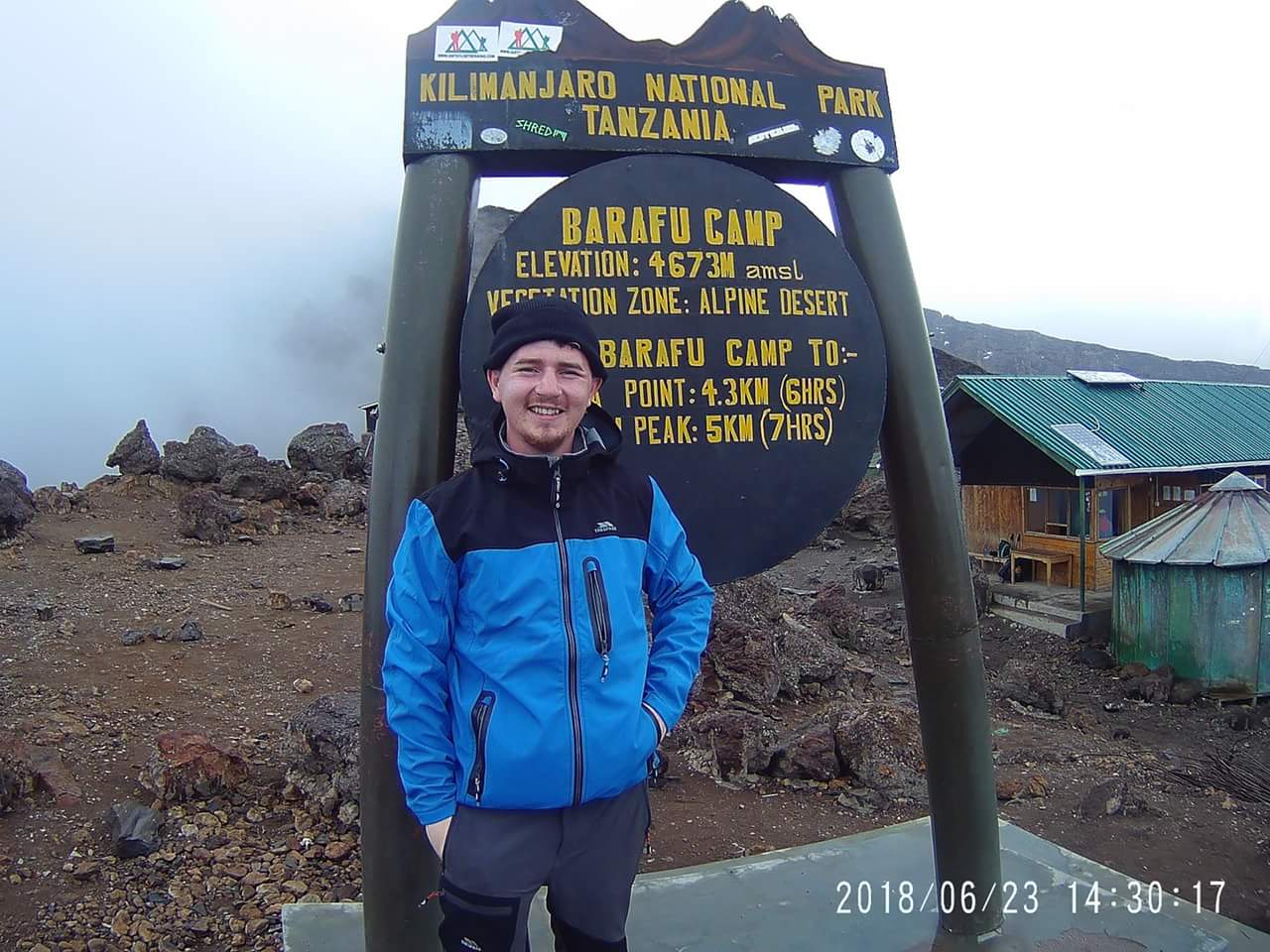 “But I had a mission to complete for Cystic Fibrosis Ireland, for my cousin Cathal, for Phil (climbing partner) and her late daughter (who passed away from Cystic Fibrosis) and for everyone who supported me. I didn’t come to fail, so it was definitely a mental battle, but I struggled on to reach Stella where I tapped into a new energy source that helped me the rest of the way.”

In fact, he was meant to finish at Stella Point. That was supposed to be the glorious finale to a tortuous climb. But Ryan says he looked further ahead and saw a new goal. He got back up and kept moving.

“I could see Uhuru Peak, which was another hour away. I had a five minute break with some water and made it up to the highest possible point on Kilimanjaro - Uhuru Peak (5895m).”

The end justifies the means in most of these cases, but even for someone as determined as Ryan, the difficult journey to get to the top became very real, very quickly early on.

“I first noticed it (the oxygen deprevation) at the main gate when I walked up a short, steep hill and became almost breathless.”

By the second day, the whole climb was in serious jeopardy.

“I didn’t get much sleep from the night before. It was on this morning that I noticed the person I was doing the climb with, Phil, was sick and I became concerned for her health.

“I went on ahead climbing up to the second camp Shira Cave and arrived in good time shortly after the porters.

“I had a rest and waited for Phil to arrive. I had made it there at 2pm and the hours passed by, but there was no sign of Phil, this made me very worried. I decided to back-track and see if I could meet them.

“Then around 6pm they arrived - Phil was absolutely exhausted and didn’t feel good. We had dinner and then the guides highlighted issues with her health and said they would see how she was in the morning.”

In the cool sunlight of the next day, a difficult decision was made, Ryan recalls.

“There was still no improvement in her health, so a very tough decision was made to send for rescue and take Phil off the mountain because of altitude sickness.

“We were all absolutely devastated. But she has my respect, she made it to an altitude of 3750m.”

Goodbyes
Ryan was going to have to go-it alone from here on in.

“After we said our goodbyes to each other I knew it was all up to me to complete the journey for Cystic Fibrosis Ireland.

“I headed to Lava Tower (4600m), this is were I got very bad sunburn and windburn to my face, which resulted in swelling and blistering.”

Along the way, technology also let him down badly as first his Fitbit and then his mobile phone succumbed to the severe temperatures and altitude. He lost track of time completely, he says.

“I went on to Barranco Camp (3900m) where we set up camp and were getting ready to tackle the Barranco Wall - a very hard climb,” Ryan adds.

“After conquering the wall, a decision was made to skip a night’s rest at Karanga camp (4900m) and head straight to base camp for rest at Barafu (4645m).”

By 9am the next morning Ryan had done it. Scaled Uhuru Peak - well over 5 kilometres above sea level - and all for Cystic Fibrosis Ireland.

“I did it for everyone back home. So it was definitely a different emotion. Everything just seemed to be perfect at the top, I could’ve stayed there all day.”

Not everyone was as lucky as Ryan though. With quite a few struggling at the last hurdle.

“I passed about six people on the way to the summit on oxygen support and they where collapsed on the ground”, he adds.

“I had to ignore them and focus on getting myself there. The altitude was kind to me though and didn’t really have any effect on me, which I was surprised at - must be thanks to the Ravensdale mountains,” he says, with a wry smile.

A goal which was months in the making, with many fundraisers here in Dundalk and around Louth before the trip, has been achieved. What does the future now hold for Ryan Doherty?

“My main goal now is to get back into full-time employment, as I’m just after finishing college in DIFE in Drogheda where I became a Sports Therapist, so my plan is to open my own clinic in Dundalk, hopefully soon enough.

“Who knows what’s next. I heard Everest is good!”

And you wouldn’t put it past him either.