Some memories of Dundalk when it was a ‘Bicycle Town’ 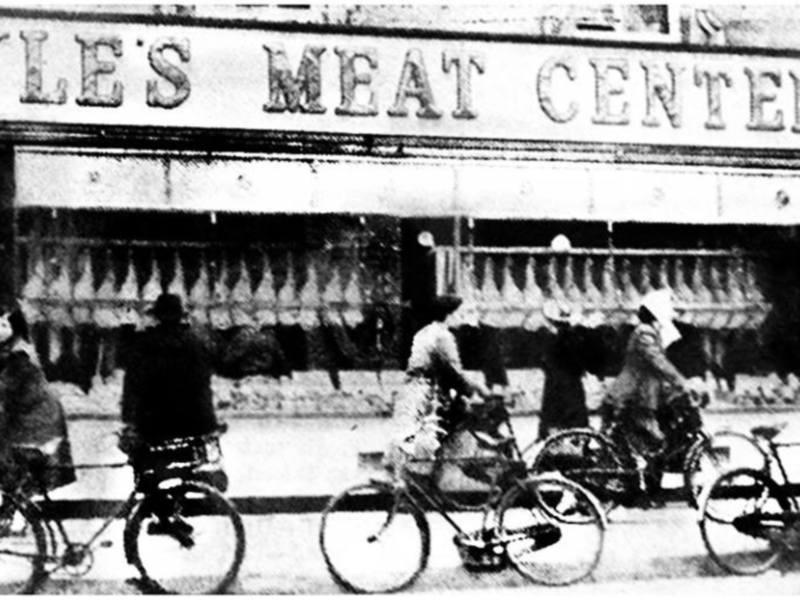 Dundalk and its history of cycling

My good friend Anthony O’Hagan has sent me a poem he has written just recently about bicycles which has reminded me that Dundalk of my youth used to be considered a ‘Bicycle Town’!

So much so that people used to say that it compared favourably with the towns of Holland and Belgium where bicycles were a way of life for generations.

Much of that ethos has passed away with the closure of the Railway Locomotive Works at one end of the Town and the footwear factories at the other. Yet people who are now past retirement age still speak of ‘waves of cyclists’ passing their homes at certain times of day, on their way to or from work.

At one time Dundalk people depended on the ownership of a bicycle for their liveliehood and the crime of stealing a bicycle was like that of stealing a horse in the Wild West of America.

It is not like that any more but it seems that there has been an increase in ‘pedal power’ throughout the Town in recent years and Tony’s poem, in a way, reflects the changing attitude to cyclists over the past decade when people have begun to think more seriously about environmental issues!

He calls his poem ‘Think Bike’ and you have to read it careful to understand the message he is trying to get across to the present generation of Dundalkers!

Racer boys on bicycles roaring down the roads

Ladies on the crossbars, not a load to carry

Night is for romantics, coming from the dance

Heading for a wedding, oh but that's a different story!

Think once, think twice, think again and be mindful

Think once then twice, think bike

Look up at your lover, he is coming right behind you!

Councillors at loggerheads, to do or not to do

How to spend the money on something that is useful

Blow it all on cycle lanes going nowhere,

Or dole it out in dribs and drabs on vital social services.

Think once think twice, think again and be mindful

Look into your mirror, they are coming right behind you!

Gardai in patrol cars, spinning through the streets

Keep their eyes open for the worst that may happen

Watch the drunks and hooligans hanging round the town

Never see the peddlars, peddling on the pavement.

Get off the footpath, they are coming right behind you!

Reading Anthony’s poem the first thoughts that came to me were not, as you might expect, of the present day cyclists speeding along on the paths were they should not be riding but of a half-forgotten memory of a pleasant summer's day many years ago. It was of a semi-illicit romantic experience I had at time when there not so many cars on the roads.

My thoughts went back to the year when I, mostly, left the cycling experiences of my youth behind me and purchased my first motor car! It was not an expensive item because it did not cost all that much and insurance cover was cheap but, still buying petrol to run it was something about which you had to be frugal! Petrol was about four shillings a gallon which, in modern money, equates to less than ten cents per litre. Not much, you might think but when my earnings were only about seven or eight pounds a week, it was something you needed to keep in mind went travelling any distance!

On this particular day I was returning from a trip to Drogheda when I realised that I had run out of petrol and came to a halt in the ‘the middle of nowhere’. Then I remembered that there was a public house nearby where somebody might know where I could to get petrol. I walked about half a mile or more and when I got there was pleased to see that the front door was open. There was nobody behind the bar but there a good looking girl that I had met previously at some function sitting at a table.

When I explained my predicament she said cheerily ‘Don’t worry, there is a place down the road where they sell petrol if you have a can in the car!’ As it so happened I had one of those old fashioned petrol cans that they called ‘Jerry Cans’ but I said that it it was going to be a long way to carry petrol and, anyway, I did not have a lot of money on me to pay for a tank full of petrol.

Again she replied ‘That’s no problem as I have a bicycle outside and I know the fellow with the pump who will sell you enough to get you to Dundalk!’

When we went outside I realised she had no intention of letting me riding off on her bicycle on my own. She said ‘You can take me with you’ but, to make things more difficult, it was one of those old-fashioned ladies’ bicycle with no cross-bar. When I pointed this out she said ‘I can sit on the handlebar’. Now she was quite a big girl and, if you have ever ridden a bike with somebody perched on the handle-bars, you will realise that it can be quite some feat. Anyway, we set off with her ladyship balancing in the handlebar and I need not tell you that it was quite a pleasant experience for me to have my arms full of female pulchritude when rattling along the highway.

Luckily, it was all down hill to where my car was stopped but, when we reached that point, I had great difficulty in bringing the bike to halt and the result was that we both fell into the ditch. She took the mishap very well but I said ‘Look, you stay here in my car and I will explain to the petrol attendant and hope that he will understand!’

All went well and I was back with the petrol before very long, bundled her bike into the boot of the car, tying the top down with a piece of string. I left her at her home and made my way back to Dundalk where I filled the tank at the garage where the owner was used to my paying for the fuel on payday.

I thought no more of the incident until about fifty years later when I met the same lady in a local supermarket. She informed me that she was a grandmother by that time and that her grand-daughter was expecting what would be her great grandchild. Then, out of the blue, she remarked ‘You know, you nearly put a stop to all that!’ When I expressed surprise, she said ‘You remember that day when you took me on the bar of the bike. Well, I was engaged to Paddy (not the real name) and he got to hear about it.

‘He told me that, if I ever did anything like that again, the marriage was off!’

What I did not tell her was that I had an encounter with her Paddy in the meantime and he was nothing but nice to me. I often wondered afterwards, was he secretly pleased that he had something he could hold over his bride to be and thankful to me for that advantage?