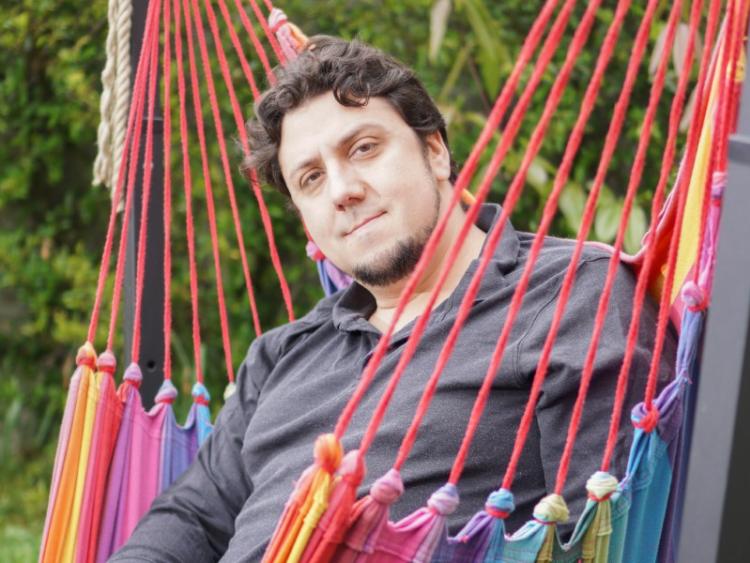 Originally from Amsterdam, but now settled in Dundalk, businessman, Aaron Stork, speaks with passion about his company - Marañon World of Hammocks.

Mr Stork also chats amiably about life in Dundalk, what it takes to succeed in running your own business and how he got to where he is today.

Aaron, who also works as a part-time, permanent, care worker for the Simon Community hostel in Barrack Street, Dundalk, enjoys many aspects of living and doing business in the town.

He explained: “I was born in Amsterdam in the Netherlands – but over 14 years ago, I was travelling through Ireland. I’m actually a guitarist. I was living in Rostrevor before that and I had friends in Dundalk and a room became available so I just took it.

“That was back in December 2004, I moved to Dundalk. I like the people here – it’s a friendly town overall and I like the countryside and surroundings. Ireland has changed over the years - it’s different since 2004 and then after 2008 - basically the downturn, and we’re still in the downturn in my opinion anyway. It pretty much destroyed the small businesses in town with mega stores.”

Aaron has been involved in the hammock business since he was a teenager. His father, Gilbert Stork, originally opened the first European hammock shop in Amsterdam in 1981. Since then Aaron has continued on the business in Ireland but also maintains websites in different countries.

“I’ve always worked with the hammocks since I was 15, some website development, some work in the shop but mostly the IT part of it. It was my dad’s shop. My dad started Marañon Hammocks in 1981 in Amsterdam,” says Stork,

“He had the first shop there in the city centre. Basically, it was the first hammock shop in Europe! At the moment, we have two shops, one in Barcelona and one just outside Schiphol Airport in Amsterdam but we are more internet focused nowadays.

“What I do here - I have a separate Marañon business. I buy in my stuff from my dad but I buy in and sell and ship from Dundalk straight away. I also do the website part for the maintenance and development for other things but it is a separate business. We have 9 money-making websites that goods are directly sold off.”

So, how did Aaron set up his business in Dundalk?

The Dundalk-based businessman explains: “I did an Enterprise ‘Start your own business’ course. It got the ball rolling for me; it was with the Local Enterprise Office - Louth, and they give you some advice about grants that was a good start and you need to enjoy what you’re doing.

“I think it’s important to be behind your product - although there are some business people who would sell anything and they don’t care as long as they are making money, but I think for a successful business and for it to last, you need to have a product or service you believe in.

“I just enjoy doing it and I do like to work for myself and have that freedom, fill up my own time.”

Check out: maranonhammocks.ie for more information.