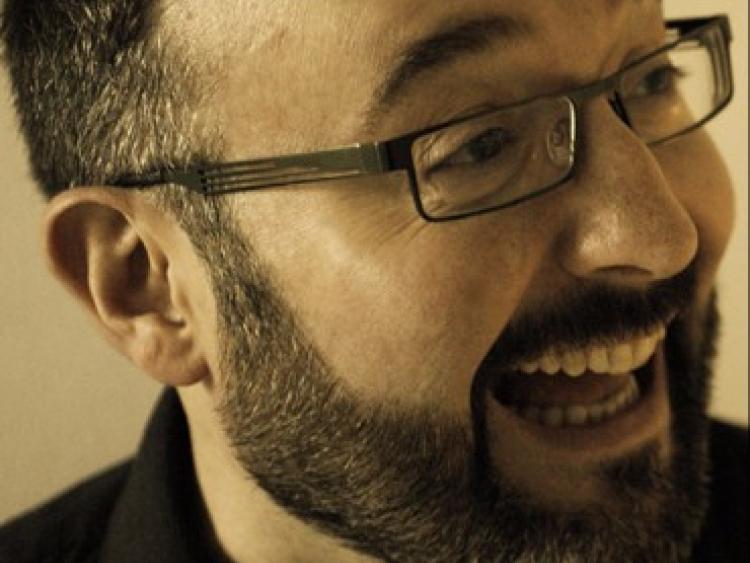 Paddy Cullivan of Callan’s Kicks and The Late Late Show

Not heading to the pub this Good Friday? An Táin Theatre in Dundalk have ‘The 10 Dark Secrets of the Irish Revolution’ on from 8-10pm tonight (Friday).

Paddy Cullivan, star of of Callan’s Kicks and The Late Late Show, brings you this audio-visual spectacular on the hidden history of the Irish Revolution.

The critically-acclaimed one man show combines satire and song with striking imagery. How much do know about Ireland’s road to revolution? Mr Cullivan is sure to let you in on some enlightening secrets. Tickets are €15 or €12 concession.

Mr Cullivan says he likes performing in Dundalk. “This is my first time bringing this show to An Táin, but I have performed in Dundalk before,” the writer and comedian reveals. “I played the Spirit Store years ago with my band. Jinx Lennon would also be a Dundalk hero of mine.”

Mr Cullivan ponders what Kevin O’Higgins, the politician who brought in the Intoxicating Liquor Act, which has been lifted for the first time today, would make of the fact alcohol is being sold and pubs are open.  “I am hoping it won’t hurt my audience numbers… there’s plenty of time to go to the pub afterwards,” jokes Mr Cullivan.

‘The 10 Dark Secrets of the Irish Revolution’ are told through songs, speeches and videos. “There’s about four or five songs, with 10 secrets told,” says Mr Cullivan. “I would describe it as a live-action documentary with music.”

“I wanted to tell the history in a way people will understand,” explains Mr Cullivan. “There are plenty of songs, I open with ‘Tell My Why I Don’t Like Easter Mondays’, which is a parody of the Boomtown Rats’ song.”

Mr Cullivan also adds that he wanted to tell this story because a lot of history is not being taught in schools anymore. “History isn’t even a compulsory subject now,” he says.

In the lead up to the Easter Rising Centenary celebrations, Mr Cullivan felt that the state coverage of the Rising was quite official. “There was a sort of glossing over of events,” he says. “There was also what I call ‘condescension of hindsight’. People were judging those events based on today’s circumstances.”

History isn’t black and white like some people may believe and is sometimes contradictory. “Many Irish men fought in World War One in the British army, then returned home to fight in the War of Independence with the IRA. Tom Barry for instance. He fought in Mesopotamia for the British, then later joined the IRA in Cork,” Mr Cullivan points out.

“In the performance, I deal with the death of Michael Collins, which is shrouded in mystery, and also the fact that 280,000 women were denied a vote on the Treaty in 1922. Before the treaty was voted on, female TDs wanted the voting age of women to be lowered from 30 to 21,” says Mr Cullivan. “But this never happened, and this skewed and unbalanced the treaty vote,” he claims.

“When you look at Cumann na mBan, they voted against the treaty overwhelmingly, 419: 63,” Mr Cullivan reveals. “There was a far stronger anti-treaty sentiment among women compared to men. I don’t want to sound sexist, but women don’t believe in a job half-done. Compromise was not an option for Republican women.” Mr Cullivan wonders if more women had of been given the vote, would there have been a different outcome.

“The role of women was then further subsumed after the introduction of the Free State. The Catholic Church essentially took over from Britain as the ‘overlords’. Women had been given a more prominent role during the Rising and the War of Independence, Countess Markiewicz was the first female MP,” points out Mr Cullivan.

The performer also adds that the conscription crisis was fascinating, as a large majority of the Irish population did not believe conscription should apply to Ireland. “Two million people signed an anti-conscription pledge… it truly is remarkable when you think about it. Imagine trying to get two million Irish people to agree to anything,” Mr Cullivan says. “The only way we would get two million people’s agreements on anything would be if Garth Brooks announced 20 concerts in Croke Park,” he jokes.

To find out more or to book tickets, visit antain.ie