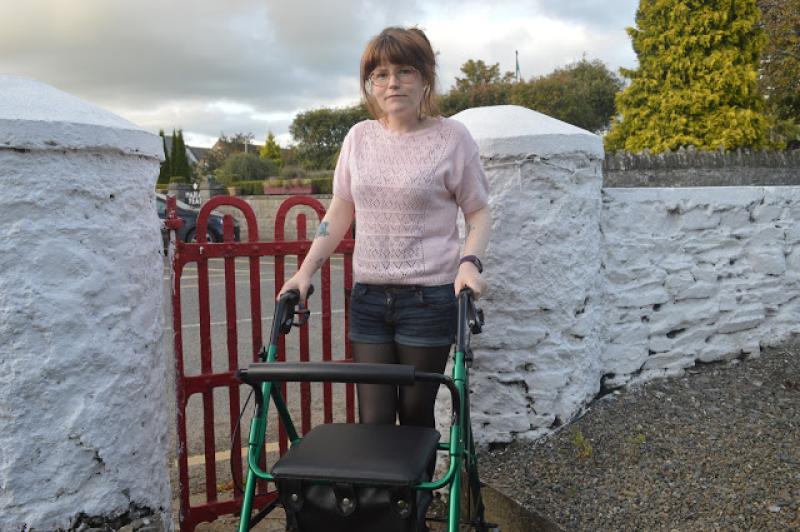 Catherine (32) has chronic pain as a result of Ehlers-Danlos syndrome, which is a group of disorders that affect connective tissues supporting the skin, bones, blood vessels, and other organs and tissues. She also has hip dysplasia, dysautonomia and hiatal hernia/GERD.

Catherine says she can’t remember a time when she wasn’t in pain.

“I had congenital hip dysplasia as a child but it was left untreated, and they eventually found it. My parents knew something else was wrong with me but we didn’t get any answers, I was simply told by doctors that I was ‘wonky’ and ‘slanted’,” she says.

“I honestly didn’t know it wasn’t normal to be in constant pain, I assumed every child screamed all night trying to sleep, felt like their joints were being ripped apart and ached at the smallest of tasks,” she adds.
The blogger believes that there is a lack of awareness surrounding chronic pain.

“People don’t understand something they can’t physically see. If you’re not using any form of aid then no one seems to understand how you could be in pain,” she says.

“However, using aids brings up its own issues. I only began using a cane in my 20’s and in recent years have switched to a rollator, which is a type of walker, and a wheelchair, and still sometimes use a cane,” she explains.

“A surprising number of strangers either stare in half disgust to see a ‘young’ person using an aid or feel they can just shout out ‘what’s wrong with you?’ While I encourage conversation and relish the chance to educate people about Ehlers-Danlos syndrome, people’s rudeness sometimes has no limits,” Catherine reveals.

Catherine says the key to raising awareness about hidden disabilities is to start educating the younger generation. “We could try to implement something in schools to teach about disabilities including ‘hidden disabilities’. I’m astonished by the number of children who don’t know what a wheelchair or walker is. I often hear them ask their parents, who get embarrassed and hush them, but we need to open a real dialogue with young people.”

Understanding chronic pain is tricky due to the lack of services and specialists in Ireland. “Many pain sufferers don’t understand their pain themselves,” Catherine reveals.

“Ireland is a postcode lottery for health care, and if you’re on a waiting list for three years, then you don’t have any answers.”

“If you have something like Ehlers-Danlos syndrome, this is particularly true. Ireland has no real health professionals for the condition, it’s hard to even find a rheumatologist who has heard of it anywhere near Dundalk,” she adds.

However, Catherine says she is very lucky to have a brilliant GP who has no qualms about researching her condition.

Catherine says the biggest misconception about chronic pain has to be the use of medications.

“The judgement people have from their misguided hang-ups is not only annoying, it’s downright degrading.”

She adds that even people who are unwell can have reservations about medication.

“I fell into that trap when I was younger. We’re made feel through the media and blogs that medication is ‘unnatural’. That we are failures for ever needing it,” says Catherine.

“We hear horror stories of addiction yet ignore the many success stories of people who take medications daily. My life changed when I decided to explore medical interventions. I take 15 pills a day, sometimes more, seven different medications, and I make absolutely no apology for that,” Catherine adds.

“I was a shell of a human being a couple of years ago, had no quality of life and could barely leave my bed. Unfortunately, my condition means that taking very strong painkillers only works like a light dose of paracetamol for someone else… but we need to embrace science and technology and change society’s thinking drastically.”

The local activist also believes that positivity has its place but is massively overrated. “I made myself be ‘positive’ for years, to the point that many who knew me, even doctors, hadn’t a clue what was happening. Don’t let the positivity turn your life into a lie,” she warns.

“I think negativity, expressing it in a healthy way, is just as vital. It’s ok to feel bad, it’s ok to rant, if you have a chronic illness you have truly earned the right to do so,” she states.

Catherine explains. “Praise when it’s due and cherish the tiny triumphs, but the comment sections of such posts make us cringe and focus only on the disability.”

“We want to be treated and held to the standards as anyone else when possible, and being human includes pain, sadness, and anger. I always try to balance that out with saying ‘it’s ok to rant, to cry, to be annoyed at the world. But let it out and move on. Don’t live there.’ That’s why I blog, it’s a great outlet,” Catherine concludes.