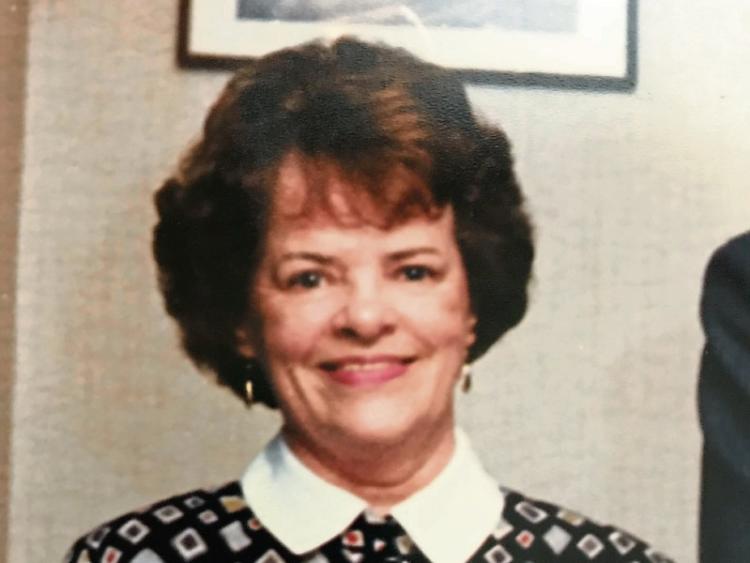 She was the last surviving of the four children of Patrick Finnegan and Rose Devlin, and devoted wife of Seamus, retired national teacher, who passed away in 2015.

A native of County Monaghan, she was born in Stranatona in 1934, and spent her early childhood years in Magheracloone until the family moved to Ardee in 1942.

Upon finishing her schooling, Rosaleen trained in psychiatric nursing at Saint Brigid’s Hospital, qualifying in 1953, where she remained until her marriage to Seamus in 1967. Rosaleen always remembered her time at Saint Brigid’s with particular fondness, and enjoyed the special camaraderie she experienced working there.

Many years after leaving, she would always enjoy returning for reunions with her former colleagues, and recounting stories of their days on the wards together.

A story from this time that she particularly liked to tell related to her playing years with the Ardee Starlights, a ladies Gaelic football team founded in 1959, which was based out of Saint Brigid’s and which was mostly comprised of nurses.

Their inter-county match against Syddan in 1960 caused both controversy and great interest in the area, with the event being denounced from the pulpit by the Parish Priest of Tallanstown.

It nevertheless attracted a (mostly male) crowd of over 700 at Hunterstown, and featured in many local newspaper articles both at the time, and years afterwards, particularly on the 50th anniversary of the match in 2010. Following her marriage, Rosaleen lived in Kilsaran, where Seamus was teaching at Scoil Muire gan Smál.

Shortly afterwards in 1969, they moved to Dundalk, following Seamus’ transfer to the Friary School, and lived in Old Muirhevna for the rest of their lives. There, Rosaleen settled into family life, bringing up two boys, Declan and Colin, following the sad loss of her deeply missed first-born son, Gerard, in 1970.

Rosaleen was a mother who focused diligently on her children, and who worked tirelessly over the years to help contribute to their education and upbringing.

In the 1990s, she returned to her much-loved vocation of nursing, working with disabled patients living in the community houses run by the Saint John of God order.

Even in her later years, she would often be greeted with great enthusiasm by those she had cared for when they would meet her around the town.

As a grandmother, Rosaleen loved to spend as much time as she could with her three grandchildren, and travelled to be present for each of their births, as well as the initial weeks following.

She looked forward to seeing them on her frequent trips to the UK, and perhaps even more so when they visited Dundalk when she could spoil them to an even larger degree.

She took a great interest in their education and development, and was a constant source of advice on their upbringing until her very last days. Rosaleen was an avid and accomplished bridge player, being a member of the Dundalk, Riva and Glenmuir clubs for almost thirty years. She was the winner of various competitions during this time, including the Muirhevna Cup in 1987. Rosaleen was always keen to keep up with the newest developments in technology, taking various computer courses over the years, and keeping in touch with her family by email and Skype as often as she could.

Although becoming frail in her final years, she continued to stay in touch with family and friends, and would still make a weekly trip into town to pick up her groceries.

She undertook her last trip the day before she passed away, meeting a number of old friends on this final visit.

Married for 48 years to Seamus, Rosaleen’s passing will be deeply mourned by her family, sons, Declan and Colin (London and Cambridge), grandsons, Finn, Daniel and Patrick, nephews, nieces, cousins, relatives and friends.

She was predeceased by her brothers, Tom and Sean (London), PJ (Ardee), and her infant son, Gerard.

Having reposed at Quinn’s Funeral Home, Bridge Street, Rosaleen’s remains were taken to Saint Patrick’s Cathedral where Requiem Mass was celebrated by Father Brian Slater CC who gave the eulogy.

The readings were given by sons, Declan and Colin and the Prayers of Intercession were led by daughter-in-law, Philippa, and grandsons, Finn and Daniel. The gifts were presented by grandsons, Daniel and Patrick. The superb music was provided by organist, Brendan McCourt, and the soloist was Sarah McCourt.

Rosaleen had arranged her funeral service to the last detail, and her request for the congregation to sing the final hymn as she left the cathedral was beautifully observed by the congregation.

Burial took place at Saint Patrick’s cemetery, and the large attendance at the Mass and internment reflected the deep regard with which Rosaleen and her family are held.