Pat Larkin was a humble man devoted to his family 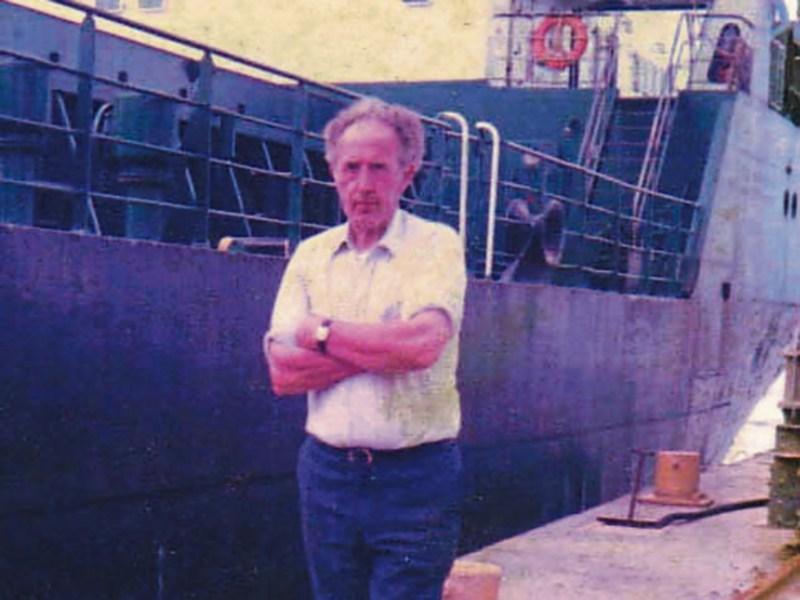 Patrick (Pat) Larkin, Golf Links Road, Mullatee, Greenore passed away peacefully in the tender care of the staff of Our Lady of Lourdes Hospital on the morning of the 21st of December last, two months to the day of the passing of his beloved wife of 59 years Christina (Chris).

Pat was born at Newry Street Carlingford on the 7th of December 1927 to parents James and Josephine Larkin the first born of seven children.

From a very early age, Pat worked in the family Coal and Potato Import / Export and Hostelry business in Newry Street either as a Barman, driving Lorries or Taxis depending on the business of the day.

In later years, Pat would recount on many occasions the procedure of the time of hauling loads of potatoes from Carlingford to the Dublin market under the cover of darkness and loads of coal home, which had to be loaded in the Phoenix Park due to the wartime restrictions around Dublin Port and Docks area.

In the late 1950’s an era which Pat often described as the worst economic period he had experienced in his 90 years he and Chris left to work in London initially as a Barman in one of the Mooney’s chain of Bars, on the sunset strip in the strand area off Trafalgar Square.

Employment as a Store man in Rolls Royce followed, later Pat worked in Vauxhall in Luton and finally as a driver with British Road Transport before returning home to Carlingford and future employment in the newly developing Greenore Container Port.

Pat always retained a strong interest in politics both local and national borne from his families’ involvement going back to the War of Independence.

His Grandfather William Delaney was an RIC Sergeant while his Father James was a veteran of the War of Independence having served with the Cooley Coy of the 4th North Louth battalion of the Irish Republican Army.

His uncle Andrew Delaney who emigrated to America in 1930’s, later joined the Lincoln Battalion of the International Brigades and was one of many lost in action at Gandesa in 1938 during the Spanish Civil War.

An accomplished footballer in his youth Pat played in the Cooley League and turned out for Cooley Kickhams on many occasions. Having joined Greenore Port in 1960 he held a number of positions during his employment in the Port namely, Transport Manager, Yard Foreman, Harbourmaster and following official retirement continued on a parttime basis.

On eventual retirement, Pat had spanned a term of over 50 years working with the same company.

Over the last number of years when his beloved wife Chris experienced failing health Pat dutifully took on the role of carer, a role he carried out with loving affection and dedication. Pat himself was admitted to Our Lady of Lourdes on the 1st of August last with health difficulties where he remained until his passing and where he bore his illness, including the loss of his wife with great fortitude and dignity.

A devoted Husband, Father, Grandfather and Great Grandfather, Pat was always available to provide help support and advice to family members and as a Taxi service for his Grandchildren to visit football practices, piano, dance, music lessons or Mass serving duties while he waited patiently for the recording contracts and signing on fees to materialise.

A humble human being and one of life’s true gentlemen who up until recently was a familiar figure enjoying his daily walks along the Golf Links Road with his canine companion Shadow.

Pat was predeceased by his wife Christina, parents James and Josephine, Brothers Jimmy, Billy, John and Sister Elizabeth. He is survived by his sons Brian, James, Jonathan and Peter, Brother Joe and Sister Tessie, brother in law Liam and Sisters in Law, Grandchildren, Great Grandchildren, Daughters in Law, Nieces, Nephews relatives, and friends. After reposing at his home his remains were removed to the Star of the Sea Church Boher where the funeral mass was celebrated by Father Malachy Conlon.

On his final journey, the funeral cortege was driven through Greenore Port where many of his former work colleagues over the years provided him a Guard of Honour at the Port entrance. Readings were delivered by Grand-daughter Bernadette Larkin and niece Gabriel Fogarty.

Gifts symbolising Pats life were brought to the altar by son Jonathan and Grand Daughters Aimee, Eimear and Lailah.

Offertory gifts were presented by sons James and Peter while the communion reflection was provided by son Brian. The beautiful music which enhanced the ceremony was provided by Carmel Rice and family accompanied by Michelle Griffin.

A Guard of Honour was formed by members of Cooley Kickhams and burial took place in adjoining cemetery.

Months mind Mass takes place in our Lady Star of the Sea church Boher on the evening of Saturday the 3rd of February at 7pm.