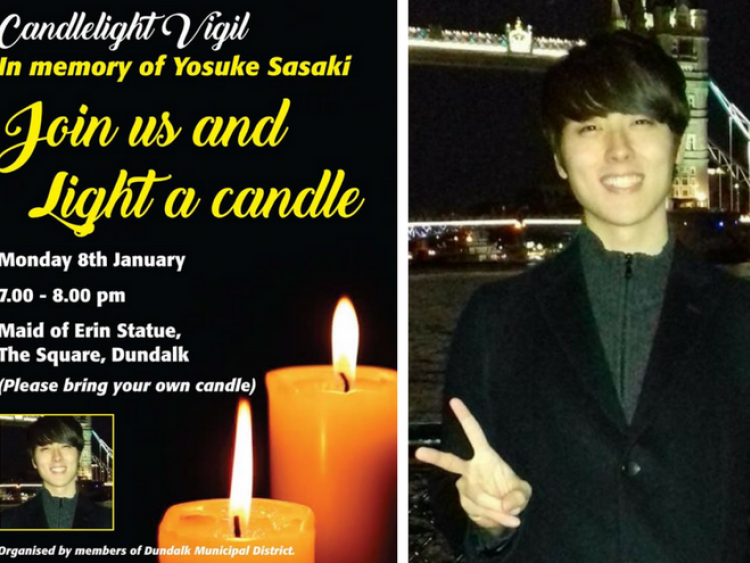 A candlelit vigil will held in honour of Yosuke Sasaki tonight

DETAILS have been released for the candlelit vigil in memory of the fatally stabbed Japanese man Yosuke Sasaki, taking place at The Square in Dundalk tonight.

The event, which has been by Dundalk Municipal District, will begin at  in front of the Maid of Éireann statue at Dundalk square.

A number of dignitaries will be in attendance, including Mrs Mari Miyoshi, Ambassador of Japan to Ireland HE, Mr Sou Watanabe, First Secretary and Mr Tim Mawe, Asia Director Department of Foreign Affairs.

The running order for the event is as follows:

Refreshments will also be provided in the Bids Office immediately after the event.

A statement from Cllr John McGahon on behalf of the Members of the Dundalk Municipal District said: "The vigil is to show our unity with Yosuke, his family, his friends and the people of Japan Dundalk has a vibrant and thriving multicultural community that we are very proud of.

"Yosuke decided to join that community and to live, work and enjoy all our town has to offer. This is what makes this tragedy all the more heartbreaking, that a guest in our town would have his life ended in such a way.

"As a result, we are using this candlelight vigil as an opportunity to show the overwhelming support that Yosuke and his family have from the people of Dundalk."

Attendees are asked to bring their own candles.