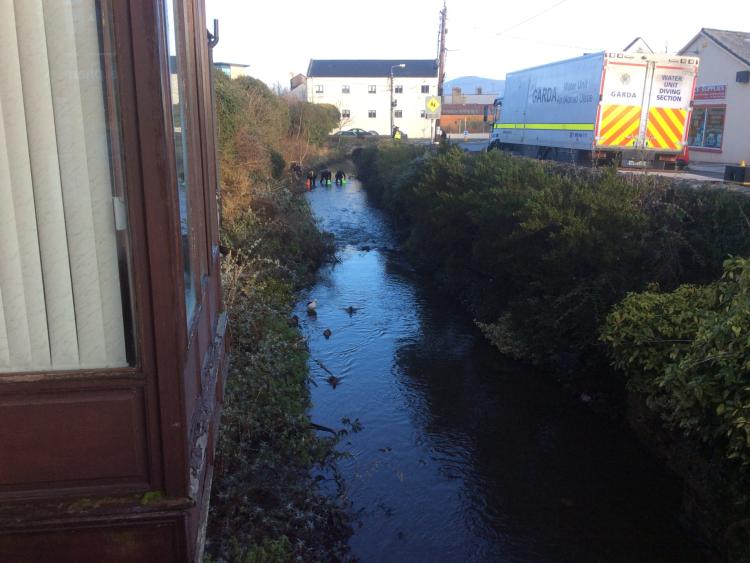 Gardai search through the river for a weapon beside the Windmill Bar, Seatown

Gardai have been spotted dredging through the water beside the Windmill Pub this morning as part of their ongoing investigations into three attacks carried out on Wednesday, January 3.

The attacker passed through Seatown on Wednesday morning after allegedly stabbing 24-year-old Japanese man Yosuke Sasaki to death on the Avenue Road. He then ran up the Inner Relief Road where he stabbed 22-year-old Cian Murphy, before he attacked a 23-year-old male from Faughart, with a fence pole, beside the Windmill pub.

Gardai were called and apprehended the attacker on the scene.

It is believed that Garda Water Unit and Diving Section were searching for weapons in the water.

Enquires are continuing internationally as the investigation develops.

Two mobile phones are said to be a key part of the investigation.

Gardai are also searching for evidence at a semi-derelict house on the corner of Avenue Road and the Inner Link Road, where the suspect is believed to have been squatting prior to the attacks.

It is believed the suspect was sheltering in some shed buildings at the rear of the vacant house.

A statement released by Gardai earlier this week said: "An Garda Síochána is currently liaising closely with our security and law enforcement partners worldwide to share and assess any relevant intelligence and its potential impact on the current investigation.

"At this time, we can find no established link to indicate that this tragedy is terrorist related. However, enquires are continuing internationally as the investigation develops."