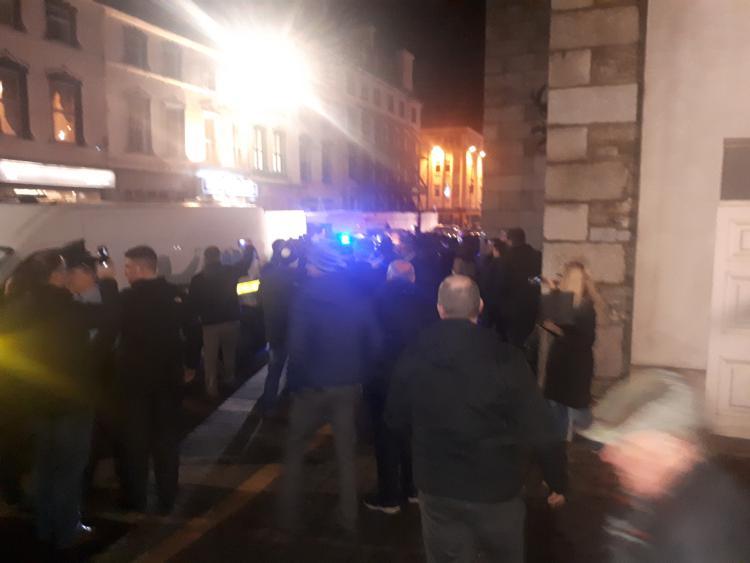 There were angry scenes outside Dundalk Courthouse this evening

AN angry mob gathered at Dundalk courthouse this evening as a special sitting took place for Mohamed Morei - the suspect in the fatal stabbing of Japanese national Yosuke Sasaki.

As Morei was led into the courthouse by Gardai, crowds pushed and shouted abuse at the suspect.

Jeers of "Welcome to Dundalk" and "This is for Ireland" could be heard as the mood outside became more aggressive and members of the media were pushed and shoved the scuffle.

Gardai cautioned some local men, telling them: "Quieten down, or you'll be lifted."

The mood in the courtroom was . The suspect sat surrounded by Gardai, occasionally speaking to his interpreter.

The thin young man, who was dressed in grey tracksuit bottoms and a dark jumper, sat with his head back and his eyes closed.

After the hearing, the suspect was taken away by Gardai.

Outside, a larger crowd had gathered and the atmosphere had become even more hostile as locals waited to catch a glimpse of the suspect.

Outside two women commented to the Dundalk Democrat about the gathered crowds saying: "That was terrible. He's only a child."

Morei, whose nationality has not yet been confirmed, was brought to Dundalk District Court in handcuffs shortly before  this evening in relation to yesterday's attack which left one man dead and two injured.

The court heard that the accused was arrested at The Crescent, Dundalk at 4.31pm today and was charged at 5.20pm.

WATCH: Shouts and jeers as suspect in Dundalk fatal stabbing led into courthouse