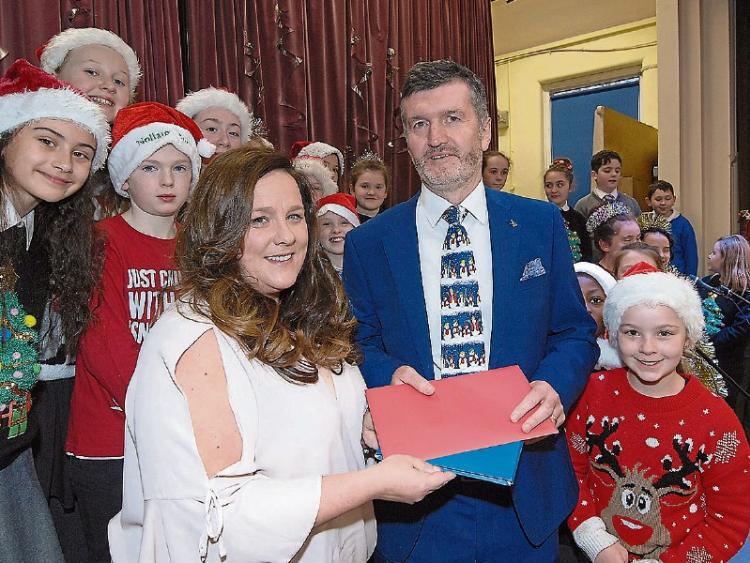 Michael Lambert, the CBS Primary School Principal since 1999, retired in style as the 458 pupils in one of Dundalk's most well-known schools put on an end-of-year Christmas concert.

Three large cakes, to be divided up among staff and students, were also laid on for the occasion.

Speaking to the Dundalk Democrat about his departure, Mr Lambert said he was naturally sad to leave, but was delighted to depart when the school was in “such a healthy state”.

Looking back, Michael Lambert recalled how he first attended the CBS primary school as a pupil in August 1960.

“It was an all-boys school at that time. We had twelve teachers altogether, four were Christian brothers, and two were female teachers.”

And his lifelong passion for the school is evident.

“Going here gave me a love for the place. I made many friends during my time here. GAA and the Irish language were always a big part of the school,” said Mr Lambert.

Michael went on to attend Coláiste Rís, as a secondary school student and then on to St Patrick's College, Dublin to complete his teacher training.

“In 1975, I came straight back here to the CBS to begin my career as a teacher,” he recalled.

Mr Lambert took up the post of school principal in 1999. He has witnessed many changes during his time at the school, such as when they started enrolling girls in 1986 and when a new extension was added to the original building in March 2016.

When speaking about the primary school's 458 pupils, Mr Lambert is full of praise: “We're really lucky to have the kids we have. Our pupils are very happy to come to school.”

Mr Lambert also expressed gratitude to the school's dedicated staff (25 teachers, six special needs assistants, a secretary and a caretaker) who “put in the time to traditional school activities like football” and who have also branched out to other extra-curricular activities such as “choir, music, and dance”.

He also noted the contributions made by the children's parents and grandparents “who play a big part in children's lives these days” saying: “They've been very supportive and help with catering for events and organising fundraisers. The whole school community works together for the good of the school.”

When asked to reflect on his illustrious career working at the helm of one of Dundalk's most popular primary schools Micheal said: “This school has been part and parcel of my life for the last 57 years, between being a student, a parent, and a principal. I'm delighted to be leaving it in such a healthy, strong and vibrant state.

The school is ready to go on and serve the needs of our fantastic town.”

Deputy Principal Patricia McKeever will take over as the CBS's new Principal in the new year.