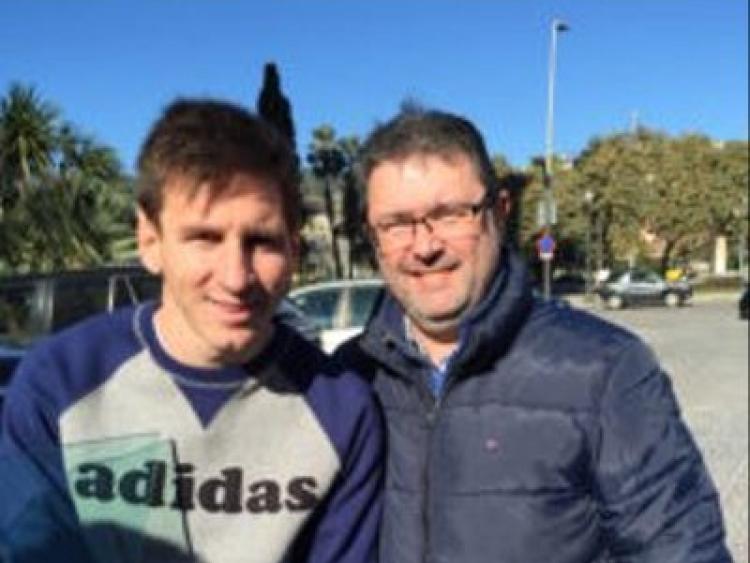 ALAN Farrelly is the Managing Director of UHY Farrelly Dawe White (UHY FDW), an audit and accounting firm with its head office in Dundalk and branches in Balbriggan, Belfast and Dublin.

A co-founder of the company, Alan is highly committed to providing clients with professional, director-led services. He lives in Blackrock with his wife, Dorothy, and their three sons, Ronan (22), Peter (19), and Daragh (17).

Q. When did you decide to become an accountant?

A. I developed a strong interest in maths at primary school in The Friary and took accounting as an extra subject for my Leaving Certificate.

Accounting wasn’t offered as a subject at The Marist at the time. Shortly after I finished my exams, I was offered a position as a trainee accountant at a Dundalk firm.

Q. What was your career path?

A. I worked for four years at Frank Lynch & Company then I took up a role at Fitzpatrick & Kearney in Newry for three and a half years.

During my time working in Newry I qualified as a Certified Public Accountant (CPA) and began to think about setting up my own practice.

Before making the leap, I decided to get some more professional experience so I moved to a firm in Drogheda. A year later, on December 8 1989, I set up the practice in Dundalk with my colleague, the late Kevin Dawe.

Q. What is the history of UHY Farrelly Dawe White?

A. The company was initially based on Jocelyn Street. Eamonn White, another Dundalk man, joined us as a director in 1991.
Three years later, we moved to a premises on Riverlane.

We decided we wanted to expand the business so we bought a practice in Balbriggan in 1998, which was taken over by Director Richard Berney in 2002.

One of the co-founders, Eamonn, was bought out by Director Michael Bellew in 2008. In 2001 we took over another firm called Donovan & Reilly and Brendan Reilly is still with us.

We moved to our current location in Blackthorn Business Park on the Coes Road in 2001. Director Gareth Evans joined UHYFDW in 2011 and Thomas McDonagh is also a director. Sadly, Kevin, the co-founder of the business, died after battling an illness in 2012.

Q. How did you turn UHY FDW into the thriving business it is today?

A. We work hard for our clients and pride ourselves on offering director-led services. We are also constantly innovating and regularly invest in training to make sure our staff are up-to-date with changes in legislation and business.

We also made the decision to join UHY in 2010 to give us an international platform. As a member of UHY, our firm is able to offer specialist sector and global knowledge to the same high quality, professional standards in major international business centres.

Q. Do you have any career highlights as an accountant?

Aged 38 at the time, I was the youngest ever CPA Ireland president. It was a tremendous honour. During my term,I travelled to Singapore for world accounting body IFAC’s AGM.

Out of that AGM, the Edinburgh group was set up with the goal of developing further areas of accounting. I was part of the group for three years and looked at improving accounting and auditing standards. I still serve as a member of CPA Ireland’s disciplinary committee.

Q. Have you participated in any recent training programmes?

A. I completed the Timoney Advanced Leadership Programme in 2013 and since then two other directors at the firm have also completed the programme.

I was involved in setting up the programme with my UHY colleagues in Spain at the San Telmo Institute in Seville. The programme was offered to business people in Ireland in 2012 at the height of the recession.

We thought it would help business leaders to better understand the challenges they faced and to be inspired by the different ways people cope with adversity.

The programme is based on the Harvard Experience of case study learning. Participants are given a case study to work on such as how to better handle difficult employees or create marketing plans or increase staff motivation.

In 2014 we set up the Alumni Programme. Later this year we will visit the IESE Institute in Barcelona. It’s the number one Management & Development Education Programme in the world as voted for by The Financial Times.

Q. What is required to be a successful leader?

A. A good leader has to have ethics and be able to show direction. I’m a fan of Nike’s ‘Just do it’ slogan. I encourage people to push through barriers.

If you want to succeed as a leader, don’t be afraid to take on a challenge. You might make a mistake but people learn from their mistakes.

Q. What are your goals for UHYFDW?

A. I’d like UHYFDW to be the professional firm of choice for everybody in the North East. We are seen as leaders in the industry.

We made the switch to Cloud accounting in 2016 and migrated all of our data onto the Cloud. We have adapted and we are keen to innovate so that we can continue to provide professional, director-led services to our clients in the years ahead.

Q. What interests do you have outside of your work-life?

A. I’m a massive football fan. One of my personal highlights was meeting the footballer Lionel Messi and getting my picture taken with him in Barcelona. I’m also keen supporter of Dundalk FC and was a football coach for our local football team, Rock Celtic from 2003 to 2015.

I started training the Under 6s and then progressed to training one of the senior teams. I was chairman of Rock Celtic from 2011 to 2014.

In 2016, I got the opportunity to interview Bayern Munich Sporting Director Matteus Sammer and later the same year, I attended an open training session with Bayern Munich that was given by Pep Guardiola.