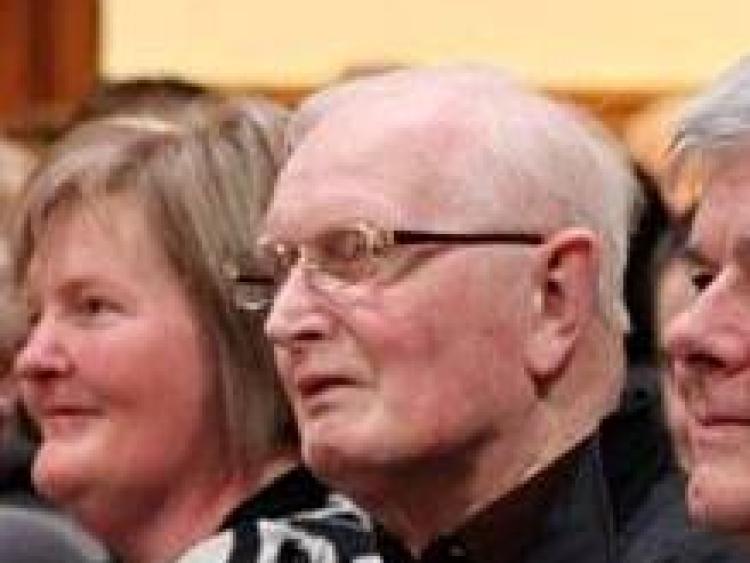 When Fr Brendan McNally was laid to rest in the shadow of St Malachy’s Church, Reaghstown last week, I recalled these words (see below) he had penned for the, sadly now defunct, Reaghstown Newsletter way back in 1999.

In this poem he expresses the love he had for this church and indeed the lives of the country people of his parish.

The people in return loved and respected this saintly man who came among us in 1987 as Parish Priest. Not so long ago respect was given to those in positions of power such as priests, doctors, solicitors, teachers etc., but it was a false respect borne out of fear of the “high position” in society these people held.

But now thankfully this respect must be earned and Fr Brendan McNally without a shadow of doubt earned and deserved all of it.

Fr. McNally was of course famed as a music teacher with pupils of his in famous orchestras around the world, but our experience of him down in Aclint Community Hall where he was Hon. President of our committee was of one who was always there to encourage, support and work with us in improving hall facilities.

I had the honour to serve as Secretary of the Hall Committee during his tenure and it was always a pleasure to discuss with him the work we were doing there. Those were heady times when FAS Supervisor Betty Carder had her office there and when she instigated so many improvements in the hall with the full approval of Fr McNally.

This is just a brief resumé of the Fr McNally we knew and does not of course do him justice on a wider scale; such as the Fr McNally Chamber Orchestra, or the Fr McNally Recital Room in DkIT’s Department of Music and Creative Media.

This is about the great, but humble priest who left us with one of the finest Church Choirs in the country and who never judged anyone on their religion or lack of religion.

When I first saw you
I was reminded of the Greek islands
Of small churches, blue and white
Standing on hillsides
In the intense heat
Of a Mediterranean sun.

Now you are clothed in softer hues
That mitigate the bleakness
Of an Irish winter,
Like a tall ship crossing the waves
You gaze over the rolling hills
Towards Kingscourt on the horizon.

A quiet landscape
In tune with the lives of country people.
You have borne them safely
In fair and stormy weather,

At the helm your steersman
Holds a steady course.