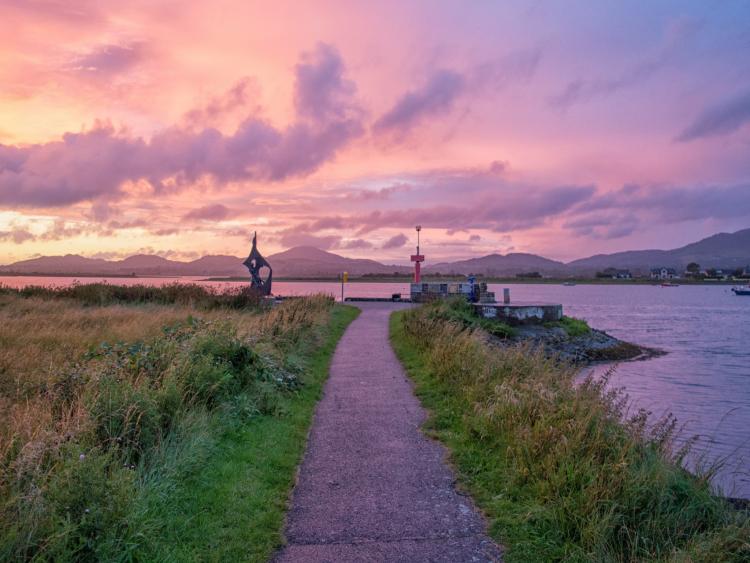 Many Dundalk people believe that it is just a misspelling of the word 'navy', thinking that it had something to do with the Royal Navy but it is just called after the men who built it!

Charlie McCarthy of the Coast Guards Houses, says that name came from the fact that the man who had the contract to build the embankment, McCormick from Bristol, brought a gang of labourers with him from England to do the work.

They were probably mostly Irish or descendants of Irish labourers who were engaged in building canals and railway tracks in England at the time. They were called 'Navigators', which was shortened to 'Navvies' because they cut their way through difficult terrain.

In relation to the cost of the embankment, Charlie tells me that local people used say that it cost 'a pound per foot'. You see it was just over 2,000 feet in length, which is just over a mile in length.

Apparently, the contract also stipulated that it would be 60 feet in width which is not the real width of the pathway but the depth back from the seafront. Charlie adds that this measurement has led to an anomaly in that the Harbour Commissioners eventually inherited this area of land which was not supposed to be used for commercial purposes.

Originally the Earl of Roden claimed all the land along the shore front from the Soldiers Point to the Newry Road because of grants to him by the old Irish Government for developing the Harbour.

One a later Lord Roden, however, deeded this property to the Harbour Commissioners in his will. Charlie says that a stipulation of this will was that the land behind the embankment should be used only as a parkland for the benefit of the 'people of Dundalk'.

He was not sure which of the Lord Rodens left this bequest but I suspect that it might have been the Fifth Earl, John Strange Jocelyn, who died in 1898. He left St. Helena Park to the Town Commissioners for use by the people as a recreational area because of the unpopularity of some of his ancestors in Dundalk.

Charlie McCarthy also mentioned that Alexander Nimmo built most of the sea piers along the West Coast of Ireland and I wonder did John Macneill work on these projects as well?