Fr Willie Murtagh was devoted to his parishioners in Louth 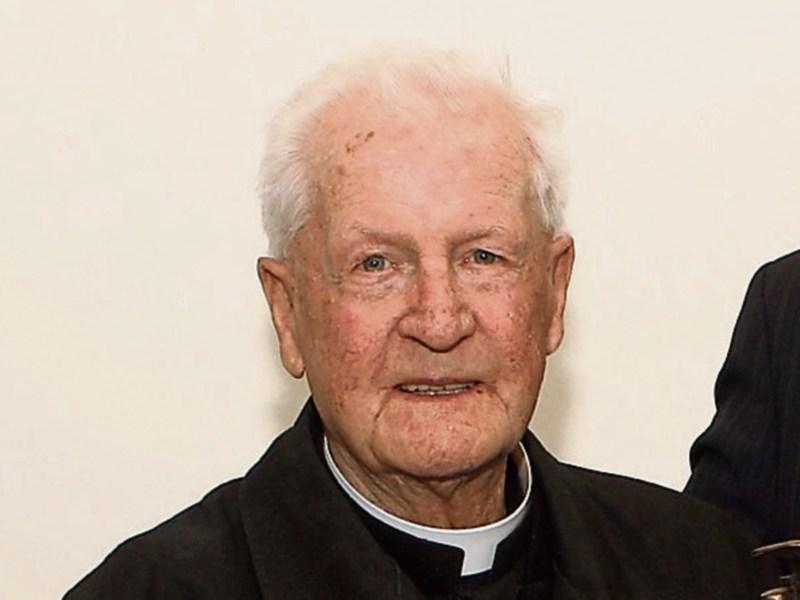 Father William Murtagh who died on September 26 last was the oldest and longest ordained priest in the archdiocese of Armagh, serving 73 years in the wider catchment area of his native Dundalk.

He and younger brother Mick served as priests in the Diocese for a combined period of well over a century, and hold probably a unique place in its history, being appointed parish priests on the same day. Brother Mick was assigned to Kilkerley, and the deceased to Clogherhead.

Father William or Willie as he was known passed away peacefully in Our Lady of Lourdes Hospital in his 99th year, having been resident in Moorhall Lodge, Ardee for his last two years, returning on loan in a manner of speaking to the Deeside town where he was such a loved figure and driving force, being a founder member of the Credit Union which was the first branch then set up in Louth in 1962.

He was a pioneer in different ways with the local Legion of Mary which he started one of many organisations in which he was involved in the town, including the golf club where he derived much pleasure as a keen golfer. Other bodies to which he lent his great energy and talents during his time there were the Saint Vincent De Paul society, Saint Brigid’s Hospital, the branches of the Hospitalite of Our Lady of Lourdes and of the Blind.

Likewise he gave unstintingly in his long and very active ministry in Clogherhead where he spent the final years of his priesthood, serving as Parish Priest from 1977 to 1995, and from then until this year as Pastor Emeritus, as well as the other parishes in which he served. He was a man who truly practised being busy living.

As a pastor he was unfailing in his devotion to and always there for his parishioners, and his demise marks the end of an era with his affinity with people spanning all age groups, and three or more generations in families.

This was borne out of a genuine interest in parish and parishioners with his vocation based on three principles of respect for oneself, family and community.

His parish and his flock were his first priority, and loved to and faithfully visited homes to listen to and support his flock.

He always attended the sick and those in hospital with a strict weekly routine of visiting Our Lady of Lourdes and Cottage Hospitals to see parishioners and friends. His kindness and care was reciprocated by parishioners when failing sight and mobility robbed him of his independence, and they saw to it that he got to wherever he wanted. Also they also brought him to the local senior citizens club, and to special occasions, such as Holy Communion and Confirmation. Last year he was a special guest at the celebration of the 1916 commemoration in the local school where he was presented with a commemorative tricolour.

Nobody looked after him with such dedication and kindness as his faithful housekeeper Jane, who served him in that capacity for 27 years.

He remained always in contact with family and maintained his ties with his native town, making sure to visit family members every Friday.

He also was closely connected with his fellow priests and was never known to have missed a fellow priest’s funeral.

His parents Mick and Mary Jane lived until 96 and 98 and he clearly inherited their genes of longevity, along with other traits such as staying power and aptitude for their chosen vocation. He also was blessed with a strong constitution and healthy appetite, and a liking for exercise also clearly was an important contributory factor to his long life. He cycled everywhere, and swam through the summer and into the autumn until into his 80s.

He also remained young at heart, evident from the fact that into his 80s he received invitations to attend 21st birthday parties.

His parents ran for a half century the family grocery and pub business in Francis Street where Father Willie was born . He was the eldest of four children, comprised of two sons and two daughters. His brother Father Mick and sisters May Murphy and Kitty sadly passed away before him.

His first parish was Dunleer where he served from 1944 to 1947, and then spent two years in Beragh in County Tyrone, and from there transferred to Faughart in 1949 to which he was attached for nine years.

In 1958 he was assigned to Ardee where he was senior curate , and ministered on the Deeside for 19 years before being made Parish Priest of Clogherhead in 1977 and where he served the remainder of his distinguished clerical career.

In a lifetime that began after the first World War, he entered the priesthood during World War 2 , and lived through great changes and to see great strides in technology. This was a development he warmly welcomed and embraced. As a child he liked to build model air planes, and always loved new gadgets.

He especially hailed the advent of the mobile phone as the greatest invention which that afforded him freedom to leave his parish and still remain in touch with his parishioners who could contact if they needed him.

He was also a renowned historian, who was also deep into nature and studied the movement of birds that heralded the different seasons.

He was a keen sportsman who in his younger years played Gaelic football at college and with Young Ireland. He had an abiding interest and love for the sport, and was a regular spectator at club and schools matches.

He engaged in game shooting with his grandfather and also fished earlier in his life. But golf was his big hobby that he enjoyed playing all down the years, and was an Honorary Member/President of the Ardee club, as well as a member of County Louth.

He also played with his fellow priests, and won the Priests championship twice, the first time when he was 90, and retained it then the following year.

He was wonderfully cared for by the staff during his stay in Moorhall Lodge. His death leaves a big void and is deeply regretted by Archbishop Eamon Martin, Cardinal Brady, the Priests of the Archdiocese of Armagh, his nieces, Anna, Dara and Michelle, Blackrock, his grandniece, Clíodhna, grandnephews, Ronan and Joseph, nephews-in-law, Eamon Laverty and Shane O’Reilly, his dedicated housekeeper Jane Marry, many friends and parishioners.

He reposed at Moorhall Lodge on the Wednesday and Thursday. His remains then were removed on Thursday for evening prayers in the Church of Saint Michael, Clogherhead.

Right Rev Dean Colum Curry PP VG Beragh, Armagh and Very Reverend Martin McVeigh, PP Clogherhead were the principal concelebrants of the Requiem Mass the next morning, in which many of the priests of the diocese attended.

The Readings were given by Michelle and Ronan O’Reilly, while the Prayers of the Faithfull were led by Anna Laverty, Muriel Tester, Shauna Tester and Dara Murphy.

The beautiful music was provided by Clogherhead senior choir and the children from Callystown National School under the direction of principal, Ambrose McGinnity.

Month’s Mind Mass is on Sunday, November 5 at 11.30am in Saint Michael’s Church, Clogherhead.