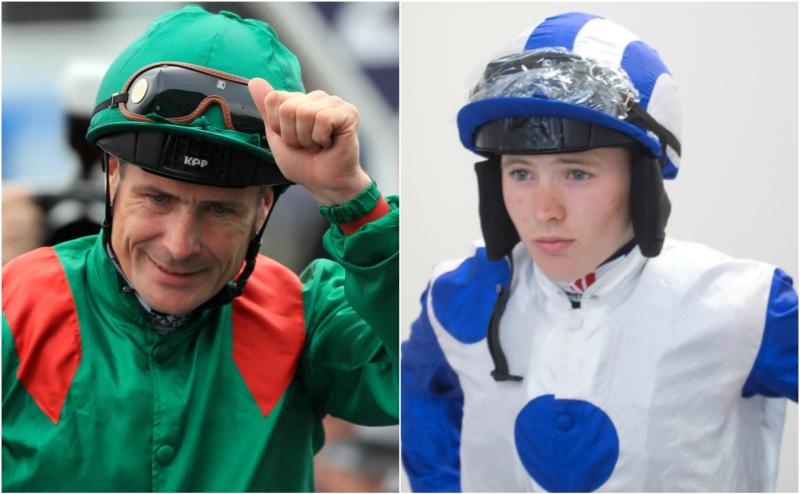 Offaly man Pat Smullen is still in with an outside chance of claiming the Irish Champion Flat Jockey's title for the fourth year in a row as the season enters the final furlong.

The Rhode native has ridden 87 winners this term, while his sole rival, Colin Keane, has ridden 94 to date with the season due to end on Sunday, November 5.

Pat has admitted in recent weeks that he doesn't feel he has the ammunition to claw back the deficit on Keane, but both men are set to take seven horses each into battle at Dundalk tonight.

Here's the lie of the land and where the victories and defeats are likely to fall this evening:

17:10 - The 17:10 race sees Smullen take the ride on Peace Officer who is the 4/1 third favourite behind warm favourite Shinko Princess. Peace Officer hasn't won in four starts in his career so far, but has run with credit on his two most recent efforts, both at Dundalk. he was third behind Smuggler's Creek at the Louth track on October 6. Colin Keane rides Nigg's Bay, who hasn't seen a racetrack since May. This horse finished third on debut but was a remote 8th behind Auckland at Leopardstown next time out. Both have a chance to place here, but Shinko Princess, and Ice Storm look formidable in opposition.

17:40 - Pat rides the highly thought of Vivianite for Mick Halford here and the newcomer is actually the 11/8 favourite. No racecourse experience is a negative but Halford's yard is going well and this one is related to a number of Irish winners.Interestingly, the second favourite here, Overcoming, will be ridden by Colin Keane. He was seventh on debut but will strip fitter now for that first run. Foreign Secretary could spoil the party altogether as an intriguing newcomer for the all-conquering Ballydoyle operation.

18:40 - Neither jockey will be contesting the 18:10 race for apprentice jockeys, but the rivalry well and truly returns in the 18:40 with Keane and Smullen's runners virtually inseparable in the market. Keane rides the 4/1 second favourite Artistic Melody, who won last time out, whole Smullen follows close behind on Tonkinese at 11/2. Tonkinese needs to recapture some long lost form, while Artistic Melody certainly looks more likely to figure.

19:10 - Yet again in the 19:10, the pair's horses are being given a remarkably similar chance of winning by the bookies. Both Melisandre for Keane and Cloudy Miss for Smullen are 6/1 co-second favourites behind Sheisdiesel. Smullen's mount is actually expected to give a good account of itself tonight, despite finishing eighth of 14 last time out. Keane's horse is stepping slightly back up in class having been third in her last start. Smullen has the edge here.

19:40 - Smullen has the favourite in the 19:40 and should win on board Frima for Dermot Weld and the Aga Khan. This horse is lightly raced, but has been holding better company than this, despite finding wins hard to come by. Being a filly out of the iconic Frankel, she is sure to attract attention as the 2/1 favourite. Keane will be playing second fiddle here for sure as he hopes for massive improvement from Bid Adieu who is an 8/1 chance.

20:10 - Keane will once again be praying Smullen doesn't guide yet another favourite to victory here as the Offaly man saddles Linger for Shark Hanlon. Linger continues to be backed today at 5/2 as bookies slash odds on the Smullen win, while Keane's mount Creative Talent, tailed off in two recent starts, languishes at 9/1. With 16 going to post, a shock is not out of the question, but Smullen certainly holds the stronger hand again.

20:40 - It could be a case of the lucky last for Keane as he bids to hold off the late challenge of Smullen in the flat jockey's championship. He gets the leg up on Ben Rumson, a horse bidding for a hat-trick of wins. He's won four out of his last five races and is the worthy 2/1 favourite, looking like Keane's best chance of a winner on the night. Smullen's mount, High Kicker, does a lot of kicking to a competitive point, but doesn't win all that often. His last victory was way back in 2015 and unless the polytrack at Dundalk sparks improvement, he looks a remote hope.

Verdict: Smullen can bag himself two winners in the shape of Linger and Frima, but Keane can keep him at arm's length with victory in the last. Smullen will be hoping the likes of Vivianite is good enough on debut and that Keane clips up on the likes of Ben Rumson. It appears as though the gap may still be five or six after tonight.